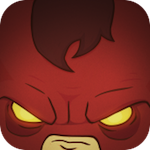 So maybe the physical arcade is dead, but the spirit and experience of the arcade lives on in the App Store. It’s a platform with a ton of simple titles with one goal: score a lot of points. It’s also a platform rife with disposable games — games that have kick, but allow you to walk away easily whenever the real world starts calling.

In that way, arcade games are the ultimate mobile games. Neither lean forward or lean back, arcade games fill in the spare moments of our lives before we have to get off the bus and start walking to work or clock back in after a break.

In 2012, we saw a lot more super impressive arcade-style games that had us shooting for high scores or flicking out our phones constantly. This is our list of our favorite ones that hit this year.

Burrito Bison, $0.99 – [Review] – [Forum Thread] – [TA Plays] – It took a while for Burrito Bison to make it’s way to iPhone and iPad, but the wait was worth it. This is a fantastic “flinging" game with serious style and a ton of persistent systems that ensure that every single time you pick it up, you’ll be working towards new upgrades and therefore longer runs.

Super Hexagon, $2.99 – [Review] – [Forum Thread] – [TA Plays] – Super Hexagon is a game about life. Or it’s about death. It depends on who you ask. We aren’t so about either of these things to be frank, but we do know that Hexagon is one of the best arcade-style games of the year. We dig its style, its music, and its core mechanic, which revolves around reflex and your ability to completely synch with the rotating hexagons flying into your FOV. Neat stuff.

ZiGGURAT, $0.99 – [Review] – [Forum Thread] – Ziggurat delivers on the high score mentality that we love so much about classic arcade games. In Ziggurat, you’re charged with shooting as many aliens as possible as they fly, scramble up, and jump down on top of the ziggurat-structure you’re guarding. Really good touch controls bolster the simple action loop.

Heads Up! Hot Dogs, $0.99 – [Review] – [Forum Thread] – Heads up Hotdogs has to be one of the weirdest games we’ve played in 2012. In the game, you’re tasked with balancing hotdogs on top of passerby’s heads. The more you can place without dropping one, the higher your score. It’s fast, fresh, and surprisingly fun.

Ow My Balls! XL, $0.99 – [Forum Thread] – The name of this one might be enough to turn you off, but give this one a shot. Sure, it’s definitely a video game about kicking a dude where it hurts, but it’s also one of the more mechanically brilliant physics games we’ve played. How long can you keep the protagonist in the air (and in pain)? We can go all day.

Tower of Fortune, $0.99 – [Review] – [Forum Thread] – If you took key elements of a roguelike, took out the dungeon crawling stuff, and focused just on straight up battles where the actions that take place during are determined by the spin of a slot machine, then you basically have Tower of Fortune. For some reason this mashup works exceedingly well on mobile, letting you jump in and partake in a couple of battles or challenge a new floor of the tower when you have a spare few minutes.

Plicplic, Free – [Forum Thread] – [TA Plays] – Vertical endless games have been done every which way, but somehow Plicplic managed to put a fresh spin on things. You play as an umbrella and, as you might be able to imagine, you aren’t the most maneuverable thing in the world. That’s what sets it apart though. Timing your dips towards either side of the screen to pick up stars and boost yourself higher, while also avoiding enemies and hazards along the way, was tricky and challenging. It was also unique and simple enough for anyone to pick up and play, making it one of the best arcade games this year.

Cool Pizza, Free – [Review] – [Forum Thread] – Easily one of the most stylish games of the year, Cool Pizza has you playing as a skateboarding gal on a mission. That mission is to beat the crap out of flying objects that are trying to kill you. From a Space Harrier-esque faux 3D behind the back perspective, launch off of ramps then whale on enemies, trying to time your strikes carefully so as to bounce from one enemy to the next and stay in the air. It’s simple to play, but challenging and deceptively deep. I’m calling Cool Pizza as my Solipskier of 2012.

Cubed Rally Redline, Free – [Review] – [Forum Thread] – [TA Plays] – The original Cubed Rally Racer was a fun and extremely challenging isometric racing game that we really dug back in 2010, but its purposely touchy controls were a big part of what made it such a hard game, and some people just could never warm up to them. That’s why it was such a brilliant idea to make the car auto-accelerate in this follow-up title, leaving you to just worry about changing lanes and avoiding hazards. Not to make it sound like Redline is easy, though, as the game gets progressively tougher as you go, and at the same time gets an even wider variety of crazy challenges that are trying to block your path. Something about it just clicks, and this was a hard game to put down in 2012.