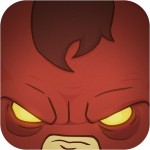 Launcher games are always hit or miss. You either love them or you don’t. Mechanically they’re about as simple as they come – your job is, generally speaking, to ensure the character that is being launched is capable of achieving maximum height and velocity for the longest sustained flight possible. If you’re lucky, you might even get to steer the living projectile a bit. After that, you get to go back to the start, possibly with new upgrades, and begin the whole process anew.

Should the previous description make you crinkle your face in disapproval, you might want to skip reading the rest of this review. Juicy Beast‘s Burrito Bison ($0.99), recently brought to iOS by Ravenous Games, is a launcher game that doesn’t try to be anything more than it is. That said, it’s also a high quality example of the genre and one that is liable to make you smirk a lot as you play it. After all, how many games will let you play as a bison-headed wrestler with a vendetta against animate confectionery?

It’s all as silly and as charming as you think it is. The story behind the game is simple and rather nonsensical: you’re the Burrito Bison and, thanks to some preternatural force, you find yourself sucked into an alternate dimension populated by gummy bears. Unwilling to engage in a gladiatorial one-on-one with a Jawbreaker for their entertainment, you attempt escape. 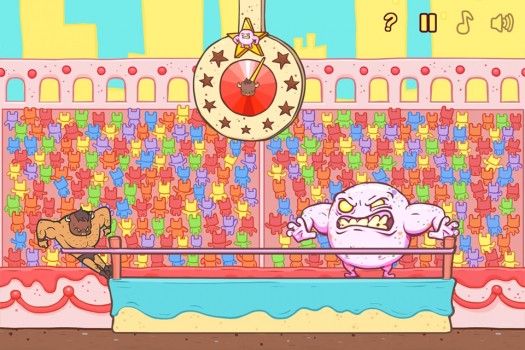 Given that this is a launcher game, you won’t find yourself having to finesse any sort of complex, finger-twisting combos here. Prior to your inevitable flight, you’ll have to first attempt to get the rapidly spinning hand on a dial to land, ideally, on the twelve o’clock position. It isn’t mandatory, but it’d definitely help you get further if you succeed at doing so.

As for your flight itself, it’s going to be a largely luck-based endeavor. At best, you’ll be able to hit on a button to the left of the screen whenever it’s available so as to cause your avatar to come thundering down on unsuspecting gummy bears. Regardless of your best attempts, however, you will inevitably run out of steam, land in an awkward pile and be shuttled back to the ring by the police.

How does that make for a good game, you ask? Upgrades, folks. Upgrades. Like any other good launcher game, Burrito Bison comes with upgrades to spare. Every gelatinous critter you pummel into oblivion gives you cash, cash you can spend on upgrades like a more powerful launch or the manifestation of hang-gliding gummy bears. The latter’s a rather interesting part of the game. Depending on the kind of gummy bears you land on, you may find yourself doing everything from bouncing on pogo sticks to floating away in bubblegum balloons.

Simplistic as all this may sound, Burrito Bison has a way of sucking you in. It begins with one flight, then another, then another – eventually, you may find yourself losing fifteen minutes or so to the game even as you transform the bull-headed protagonist into a more graceful denizen of the sky.

For its low price of entry, Burrito Bison is certainly a worthwhile investment for those who are fans of the genre. It does everything you would expect from such a title. No more, no less. If there are any complaints that I have about the game, it’s probably the occasional sluggishness and the fact that Burrito Bison seems to have a habit of periodically crashing on my iPhone 4S. That said, it’s still a pretty sweet port. If you feel hard-pressed about parting with your hard-earned 99¢, there’s always the Flash version to try as well.