The first time I booted up ZiGGURAT ($0.99), I was lying in bed, in the dark. I was hoping for something relatively simple  to unwind with, but the pulsing music and unending creep of monoptic aliens made that impossible. Just playing Ziggurat felt clunky the first time I tried it, forcing me to sit upright in bed.

There’s no pause button in Ziggurat, which speaks volumes about its design. Ziggurat demands attention.

Tim Rogers — a game designer under the Action Button Entertainment moniker and professional Kotaku.com word-puker — also demands attention, or at least an attention span. His reputation is for sharp criticism (his own reviews site is particularly brutal) buried under sprawling, maximalist writing, but Ziggurat is beautiful in its simplicity. In its own way, it reinforces all of the fundamental, paradoxical truth of the “endless" genre: infinite potential married to inevitable failure. 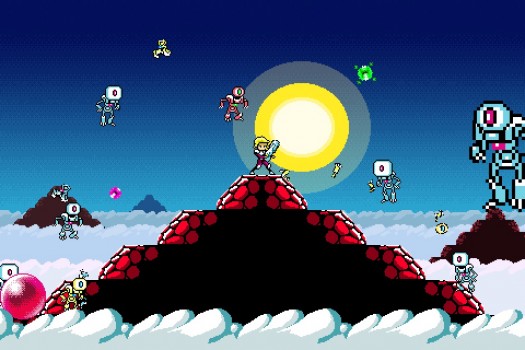 The best endless games give players just enough atmospheric window dressing to keep them wondering: where did those giant robots in Canabalt come from? What are they researching in that lab in Jetpack Joyride? Ziggurat‘s pitch: You play a woman perched at the very top of the eponymous ziggurat, armed with a laser shotgun and nothing else. High above the swirling clouds, you can see other structures in the background, each one perhaps topped with another human fighter. It’s tempting to hope that, should you actually survive the alien horde, it might be possible to rebuild society in these pyramids, but it’s a false hope.

As the sun set behinds her, our soldier is trapped on a few bricks, with no place to go. The only things that move in Ziggurat are the bullets and the aliens; the soldier is firmly grounded. Even before the aliens start climbing up the pyramid, the soldier’s sprite falls into a little heaving motion, bloodstream pumped full of adrenaline like a cornered opossum or feral dog. The sprite work in Ziggurat is excellent — particularly on the iPad — and it’s packed full of small details that reinforce the design of the game. 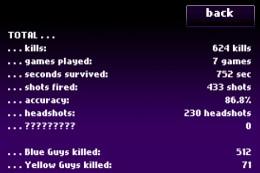 The detailed sprites are functional, too. As the aliens climb up the sides of the ziggurat, their cycloptic heads swell and deflate; as the soldier charges her shotgun, the energy ball moves through three different phases. A fully charged bullet against a fully inflated alien face sets off a generously large explosion, which can catch other aliens in its blast. Ziggurat is about efficiency and timing, about shooting the least amount of bullets to set off the largest chain reactions possible, about imposing order on chaos by … unleashing enormous explosions.

The mechanics would be impossible without Rogers’ art direction in place, but they also tend to get buried in the explosions, the chiptunes, and the bullets. There’s no tutorial, but the game is paced so that players can subconsciously learn the design, even while they’re fighting for their lives.

Ziggurat might seem difficult or unwieldy until you realize how the explosions work, until you tap into the game’s internal rhythms. Some aliens jump, others climb, and still others just seem to float, but they all expand and deflate and explode all the same. The joy of Ziggurat, for me, is that cycle of tension and release. When the soldier dies — which happens when one stray bullet or alien claw touches her — the screen flashes red and a discordant guitar riff screeches out. In Gears of War, a guitar riff meant sucess; in Ziggurat, it means failure. In both cases, it means you can start breathing again. 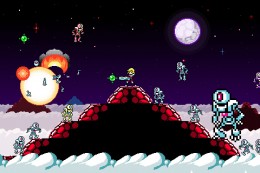 And unlike other “endless" games, Ziggurat is designed tightly enough that I never felt like I was plateauing. I am undoubtedly bad at Ziggurat — my Twitter feed and GameCenter leaderboards make that clear enough — but I’m always getting better. This isn’t a game of masochism, it’s a game of evolutionary improvement, of making the last woman alive stronger and better, one death at a time. There will be good sessions and bad sessions, but my scores are constantly climbing upwards. The title, Ziggurat, doesn’t just describe the setting of the game, but the dominant metaphor: a series of steps, arduously climbed.

Thinking of a structural ziggurat might also the best way to conceptualize the game’s controls. Aiming the soldier’s gun is done by sliding your figure along a horizontal axis at the bottom of the screen, left to right. At the outer edges, the soldier aims her gun down, at an angle. As you slide closer to the middle of the screen, the reticule moves up, until it hits 90 degrees. Everything from the alien freaks to the bullets they shoot to the soldier’s own shotgun coalesces in one spot, at the top of the ziggurat.

(There’s another, Angry Birds-esque control scheme in which your gun acts as a slingshot, but it’s slower and more imprecise than the originals. It also forces players to tap and slide their fingers all over the screen, obscuring the action. And, frankly, it lacks the thematic cohesion afforded by the “precision" controls. Avoid it.)

My favorite thing about Ziggurat is that it dismantles the hardcore-casual myth that has so long plagued videogame culture generally, and iOS gaming specifically. An “endless" shooter with Peggle controls doesn’t make for good advertising, but Ziggurat is a game that forces its players to pay attention, to process and react to constantly shifting situations, to do the (literally) impossible. It’s got GameCenter and Twitter functionality that encourages pro-social competition and discussion without asking players to pony up for more bullets or a different-colored spacesuit. It’s judiciously designed and takes the platform seriously, and Ziggurat speaks for itself.

As I broke the three-digit mark for the first time and saw the sun sink below the clouds, an orange alien behind a force field sneaked behind the soldier and killed her. The screen flashed, a discordant note erupted from my speakers, and I started over.

I’ll see you at the top.