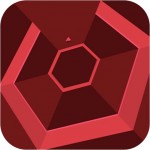 Even more punishing than developer Terry Cavanagh’s VVVVVV, Super Hexagon ($2.99) is a test of patience and an unending source of arcade adrenaline. All who have attempted Veni Vidi Vici will know the pleasurably painful twitching they are about to endure but with added vertigo.

Those who haven’t played anything from Cavanagh will quickly understand the challenge they are accepting when the lowest difficulty to select from is hard. Players assume the role of a rather pathetically small triangle which must spin clockwise or counterclockwise to survive an unending onslaught of fragmented hexagons and other shapes. The entire screen is the controller, and tapping either side dictates how the triangle spins.

Some taps will have to be short for sliding into a narrow gap and other taps will be long to withstand spiraling gaps. Super Hexagon‘s stages are aesthetically simple and seem to randomly generate, but several patterns feel “learnable" with enough practice. Along with new patterns, each stage also ramps up the speed, which helps the player avoid complacency just in case the mind-altering presentation wasn’t enough. 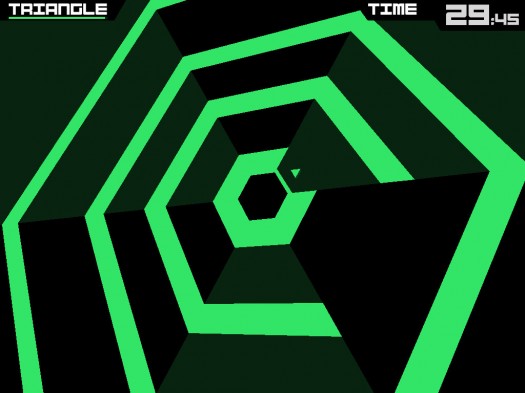 Most of the time, players will be cursing these difficult stage patterns. However, I can’t quite help but blame the input as not being “twitchy" enough at times to inch the triangle to safety. Sore loser? Maybe.

Completing the main game of Super Hexagon equates to three minutes of gameplay (as one must merely survive for 60 seconds per stage), but it’s going to take normal humans about 100 times that amount of practice to ever see the ending. A few hours in, I still haven’t cleared the last normal stage. That said, each completed stage will feel like a victory over the hardest of old-school games. Waiting for those who transcend their humanity are three harder stages to test their new, god-like twitch powers, too.

Game Center leader boards for each level provide a certain satisfaction for gloating and seeing who’s actually survived the Hexagon. Options, however, are non-existent. I would have preferred a choice to mute the voice that announces each new level to hear only the pumping music after a while. I think newcomers or casual fans may also wish for a practice mode, one that allows multiple hits or respawns instead of the game’s unforgiving one-chance, one-life rule.

Those squeamish or unconvinced by the challenge that awaits can sample a Super-less Hexagon in any Flash-friendly browser. Whether it was the unlocking of harder stages, finding the sweet spot to see the entire level to react, or just having hypnotic hexagons in my lap and in my bed (!!), I much preferred the iOS experience. I think the keyboard and monitor divorced me from the immersion, which the portable version thankfully ameliorates.

Inexpensive, innovative, and sensory-spinning thrills of this caliber are rare, so I suggest taking a ride on the Super Hexagon while it’s on sale for $0.99 before it settles into its regular $2.99 price tag.