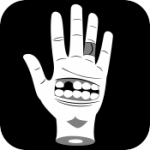 The iPhone’s accelerometer tends to be one of the most clumsily implemented features in games on Apple’s game machine that occasionally is used to make phone calls. It makes you look stupid in public playing anything with it, and usually the game isn’t responsive enough to reflect your strategic twitches. Cool Pizza (Free) is different. Actually, “different” is putting it rather lightly. Cool Pizza is downright single-malt deranged, has next to no story, and has the ability to turn your next commute into a fit of enjoyable seizures so violent you might look up and find yourself in a stretcher.

So, yeah, in a word, it’s fun. But this is also one of the first tilt-based games in recent memory that’s not just worthwhile, but also enjoyable. That it’s free is just a nice bonus. Then again, it might be free because it’s illegal to buy drugs, and this is about as close to a bad trip you can get without going to the bad side of town and talking to some bad people about snatching up their wares. 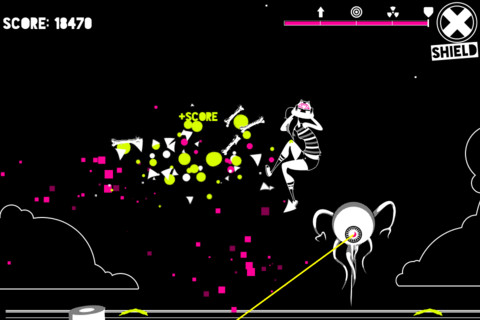 Here’s the deal: You play as a skateboarding chick who, if the iTunes description text is to believed, goes to the underworld to fight devils and determine whether pizza can ever be cool.

Good luck finding that out. Cool Pizza is incredibly tough, but also exceptionally easy to pick up and play. Developer Secret Library describes it as “a spastic screen-masher inspired by Space Harrier and After Burner,” which explains the stark color scheme, but to use a more modern vernacular? It’s like an over-the-shoulder Canabalt where you hit ramps to get airborne, smack organ- and bomb-spitting coffins with your skateboard, and avoid nuclear bombs. Also, you’ll need to focus extra hard while a glorious, blistering butt-rock guitar soundtrack blazes in the background.

That’s the most concise way of explaining the game. And despite its kooky flashiness, its simplicity helps it shine all the brighter. Because the main mechanic, tilting, and then thwacking your thumb to attack to catch even more wicked air, is all that’s going on here. Really it’s like an old arcade game, where your biggest opponent isn’t any enemy onscreen, it’s your own skill and how quickly you learn the patterns of what’s coming up ahead. I died early and often, and then, eventually, started to die only later and slightly less often. And, believe it or not, that is an accomplishment. 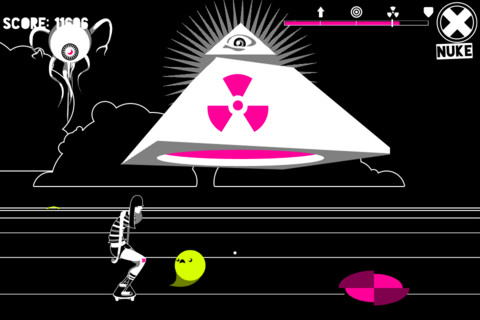 Cool Pizza is a bit sized unique and kookya reminder of where iPhone games could and in my opinion should be going: Not porting yesterday’s console hits or draining your battery to render super-colorful 3D warriors that take up the entire screen trying to emulate a similar “console-like" experience.