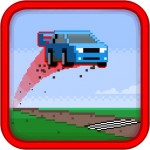 Way back in the spring of 2010, when No Can Win’s Cubed Rally Racer (Free) hit the scene, the lay of the land was a little different. Retina graphics weren’t yet a thing, everyone was using the now-shuttered OpenFeint, and there were all sorts of game genres that didn’t begin with “endless."

Cubed Rally Redline (Free) is a game for the modern era, and that’s really not a bad thing. It has the same charming retro-blocky look, the same overly aggressive cows and the same boxy little cars, but the rest of the game is a different animal. In Racer, the car was completely in your control. In Redline, it’s a bit more of a slot-car situation, stuck in five lanes, hopping between grooves.

As a result, Redline is less of a game of steering skill and more about razor-sharp reflexes. You have three buttons: left, right, and emergency time brake. The first two hop you between lanes, the third slows down time to give you just the slightest chance to maneuver. At any given moment, each lane can be full of obstacles or power-ups. Scattered throughout each run are fuel canisters, coins, and tokens that cause you to drift around curves Tokyo-style. There are also rocks, tunnels, cows and more to contend with. 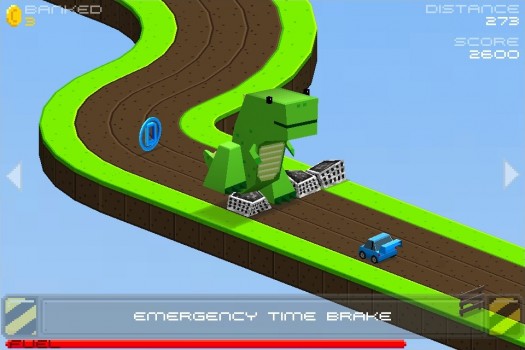 In typical endless style, these obstacles get rougher and rougher the further you go. You don’t so much get faster as they get crammed together, leaving you very little room to breathe. Mastering the emergency brake is key to surviving.

It’s worth noting the way that Redline handles difficulty, which is probably the most controversial part of the game. There are three colors of vehicles to choose from, blue, red, and black, and each is faster than the last. Consequently, runs pass by quicker and it gets harder and harder to manage lane switching. You unlock these other cars by collecting coins in-game.

In some ways, this is great. It lets players play as quickly or slowly as they’re comfortable with, but also keeps people from jumping straight into the hardest mode. Just don’t get confused about which order to unlock them: it’s the colors that matter, not the models. Do it the wrong way around and there will be a long, slow grind ahead of you. In another modern touch, you can bypass this process by buying coins.

Though most of its accoutrements are up-to-date, Redline feels classic in a more fundamental way: its only goal is to drive ever further. There’s no collection of missions, deep list of unlockables or even achievements to distract you. It’s just a matter of pushing it further, drifting your way to a higher score and avoiding everything that crosses your path. You’ll know you’ve reached a new milestone when it’s something new that kills you—finding those new things is likely to be the thing that drives you.

Cubed Rally Redline is a great excuse to get back into the bouncy, blocky world of its predecessor without just doing the same old thing. It’s a simpler sort of game, but the simplicity just makes it that much easier to get hooked. Still, I can’t help but be a bit wistful knowing that another game has been winnowed down to endlessness—we’re just lucky that No Can Win has done such a good job in the transition.