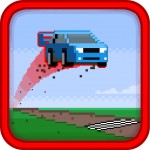 Back in mid-2010, developer Jared Bailey released a surprisingly awesome little racing game called Cubed Rally Racer (Free). It was played from an isometric perspective and featured blocky voxel graphics, giving it all sorts of retro charm. It was a pretty difficult game to get the hang of, but once you finally did it was incredibly satisfying. We gave it a big thumbs up in our review from back then.

Fast forward a couple of years, and now Bailey is back with more blocky racing goodness with his newest entry in the series, the upcoming Cubed Rally Redline. It’s not exactly a sequel, more of a spinoff, as the mechanics are decidedly different. Rather than actually steering your little car around the randomly generated terrain as you do in Cubed Rally Racer, avoiding objects and speeding towards the finish line, Cubed Rally Redline automates the acceleration of your vehicle and tasks you with changing lanes to avoid crashing into objects and ending your run.

So it’s more of an auto-running endless game with a lane-switching mechanic, but with the same randomly-generated tracks and pixel-y charm of the original Cubed Rally Racer. I think Cubed Rally Redline will be much more accessible to a wider audience because of this, and of course it doesn’t hurt that it’s a whole lot of fun too. Cubed Rally Redline is already working its way through Apple approval, so we’ll let you know when it hits, and in the meantime you can check out the discussion in our forums after checking out the vid below.

Post-video Update: I incorrectly state that the different models of cars in the game provide more challenge by way of speeding up the game, but the Old Bearded One must have just been imagining things as it’s actually the different colors of cars that offer advanced difficulty. Apologies for the error.