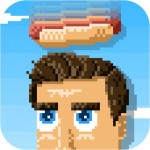 As a precocious teenager, I had an irrational fear of the police. Every time I saw them, my hands started sweating as a fetid pit of anxiety grew in my stomach. As a functional member of society today, this fear has largely dissipated — a speeding ticket is no longer the end of the world as I know it, and I don’t tend to keep company with recreational drug users (much).

Still, Adult Swim’s Heads Up! Hot Dogs ($0.99) gets to the heart of some people’s mistrust and resentment of the police: they’re all pig-eyed, hot dog-shooting sociopaths.

In fact, Heads Up!‘s seven levels are surprisingly hostile to the urban sausage: they can be dropped, eaten by dogs, blown away by air vents, and even shot by aforementioned crazed police officers.

To reinforce the point: the police officers will shoot at your hot dogs, even if they’re already sitting on top of a bystanders’ head. It’s all very irresponsible, especially since players only get to lose five hot dogs per level. 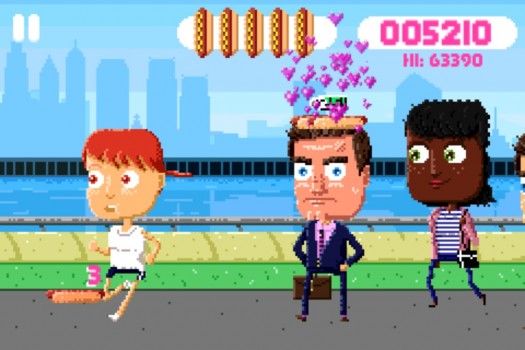 Heads Up! is a game about balancing hot dogs on the heads of passers-by. Encased meat will periodically fall from the sky, and a simple touch-and-drag will guide them onto the heads of unsuspecting joggers, business men, and be-headphoned youngsters. Points are accumulated by dropping hot dogs (and occasionally, Polish sausages or pork buns) onto people — different characters are worth different amounts based on, for example, walking speed — and keeping them there as long as possible. You’ll get a bonus when a hot-dogged pedestrian leaves the screen in tact.

This sets up its own risk-reward: you can transfer hot dogs from one person to another in an effort to keep them in play (and thus accruing points) longer. However, there seems to be a limit to how often you successfully move items from one person to another. The trick is to calculate how quickly you’re approaching this event horizon and figure out the most efficient way to clear hot dogs off the screen. 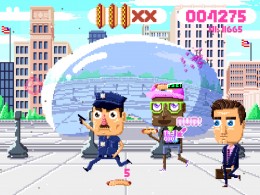 The pacing and difficulty of Heads Up! scale nicely, effectively massaging the brain into the glazed-over zen state that makes these arcade-y, infinite games so compelling.

It’s a simple mechanic, to be sure, but there’s enough nuance to keep the game engaging and fun throughout. Your strategies will evolve organically as you play longer, and there does seem to be some sort of procedural bonus item-generation: at one point, a businessman vomited up what looked like a rack of ribs, but my run ended almost immediately afterward, and I haven’t been able to recreate it yet.

The entire package is bolstered by expressive pixel art and an eye for characterization. I’m a big fan of the chunky, blocky style, but I especially like it because it complements the frenetic mechanics: even when there are six people on the screen — and one of them is shooting at stuff — and hot dogs are falling out of the sky like mana from heaven, it’s never hard to keep track of what’s going on.

For better or worse, retro stylings have an established role as signifiers of hip indie games, at least in Heads Up! they serve to keep the game clean and organized — if you lose a hot dog to a chihuahua, it won’t be because the touch controls weren’t sensitive enough or you couldn’t see what you were doing.

For anyone kvetching, Heads Up! Hot Dogs‘s chiptunes soundtrack alone is worth the price of entry, and it happens to come packaged with a sharp, charming, and funny game about putting beef franks on people’s domes. Heads Up! Hot Dogs is exactly why the App Store exists.