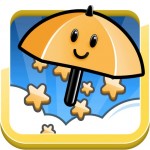 To celebrate Friday, Bradley and I sat down to play a video game. Come to think of it, that’s pretty much how we celebrate every day of the week. Anyway, today we played a game called Plicplic (Free) from developer Nathan Malville. It’s an endless high scoring game, but one that’s centered around a game mechanic that I haven’t seen used previously.

You control a happy little umbrella as the breeze continuously floats you upwards. Touch either side of the screen to dip in that direction and try to collect stars, which will boost you further along into the sky, while at the same time trying to avoid crashing into birds, who are the natural enemy of umbrellas I’m told.

Plicplic has the core mechanics down pat, creating a unique experience that’s hard to put down. It’s dying for some Game Center support and a bit more variety, two things that the developer has stated are coming in our forums, but for a buck I think many people will find themselves losing a good chunk of time playing Plicplic even as it stands now. Word on the streets is people have reached scores of 2 million and more. Good luck with that!