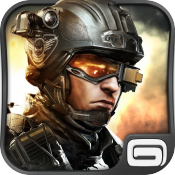 While looking quite a bit different from each other on the surface, all of the shooters here actually have a lot in common. Fast, frantic action that will test your reaction times and aiming ability, both offline and online. The major difference here is perspective. Some are first-person affairs, some are behind the back, and some are top-down. With such a variety of shooters on the App Store there’s bound to be something to suit every type of gamer.

If you’ve found yourself being quite adept at virtual controls in first-person shooters, then Modern Combat offers the full suite of features that you might expect from a console title. If you need something that’s a bit easier to control but doesn’t skimp on the action, Trigger Fist is the way to go. Top-down dual-stick shooters have proven a great fit for both touchscreens and mobile, and there were some fantastic ones released this year.

No matter your preference, if you crave some fast-paced shooter action then the App Store most likely has you covered. Here’s a list of some of our favorite shooters from 2012.

Modern Combat 4: Zero Hour, $6.99 – [Review] – [MP Review] – [Forum Thread] – Gameloft’s Modern Combat series has long since strived to be the Call of Duty of the iPhone, and in this year’s installment they get as close as ever to delivering that same type of experience to a device that fits in your pocket. The single player campaign was entertaining enough, though derivative and full of over-the-top stereotypes, but the online multiplayer side of things is far and away the most stellar offering on iOS or practically any handheld. Not to be forgotten, the visuals in Modern Combat 4 are nothing short of jaw dropping.

Trigger Fist, Free – [Review] – [Forum Thread] – [TA Plays] – While Modern Combat tries to fit the full console experience onto mobile, Trigger Fist tried to re-imagine what a 3rd-person shooter would be like built with mobile and touchscreens in mind. They totally nailed it by limiting your aiming to a single horizontal plane, like shooters used to do back in their infancy a couple of decades ago. It proved a brilliant move too as now rather than fumbling around with full-range aiming you could focus more on the action. And Trigger Fist delivered action in spades with a fleshed-out multiplayer offering as well as hands down the best AI anywhere, meaning you could have just as much fun offline playing solo too.

ARC Squadron, $2.99 – [Review] – [Forum Thread] – [TA Plays] – The Unreal Engine has long since been used to exploit the graphical potential of gaming hardware, and Arc Squadron is no exception. It’s gorgeous, but to its credit it also managed to avoid the tropes of the engine like overly dark, gritty, and shiny visuals. Arc Squadron is colorful and expansive, and makes you feel like you’re really out their in the vastness of space. Beyond visuals, it offered a fun 3rd-person on-rails shooting experience full of action, huge enemies, and tons of explosions. Its unique gesture control system also felt very natural for the touchscreen and gave you a very hands-on feeling between you and your craft.

Sky Gamblers: Air Supremacy, $2.99 – [Review] – [Forum Thread] – Like racing games, flight combat games are a staple of video games. They let you take control of a vehicle you typically would never be able to in real life, and experience death defying moves and gunfights right through the safety of your screen. Air Supremacy epitomized that, giving you free reign over a ton of awesome jets and arcade-y action that’s faster and furiouser than any Vin Diesel flick. It strays from reality, but that’s part of the appeal. It’s a graphical showpiece for iOS devices and also offers a ton of incredible online multiplayer options, along with a huge community behind it. Its follow-up title recently hit the App Store and appears to maybe take things to the next level, but prior to that Air Supremacy was the de facto flight combat game on the iOS platform this year.

Minigore 2: Zombies, $1.99 – [Review] – [Forum Thread] – [TA Plays] – We’ve waited three long years for a sequel to 2009’s Minigore, and this year we finally got it. While not fundamentally different than the first title gameplay-wise, I don’t think it set out to be. Minigore 2 added layer after layer of upgradeable items to buy, unlockable characters, a host of cool power-ups, and a variety of different maps to play on. On top of all that was a huge cast of new enemies as well as the ability to display a staggering amount of them onscreen at the same time. The result was the Minigore we know and love turned up to 11, and with visuals that took advantage of all the latest hardware as icing on the cake.

Beat Hazard Ultra, $3.99 / (Free) – [Review] – [Forum Thread] – Seeing as iPhones are descendants of the iPod, and we tend to keep our mobile music collection on them, games that can use your music library are incredibly interesting. Few do it properly though, but Beat Hazard Ultra doesn’t fall into that category. It takes one of your songs and turns it into a level, with the number of enemies, boss battles, and level of frenzy all being determined by the music track itself. It’s not just a gimmick either, as each song feels like a unique experience. Visually it’s one of the most intense games around, and it has the crazy action to match. This is hands-down one of the most enjoyable and engaging ways to experience your music, on top of being just a great dual-stick shooter in general.

MUTANT STORM, $2.99 – [Review] – [Forum Thread] – While technically just a port of an old PC title, Mutant Storm feels like it was destined for the iPad. It helped usher in a new era of retro-inspired arcade shooters ten years ago on PC, and became even more notorious with a release on Xbox Live Arcade in 2005. Visually speaking Mutant Storm is intense, and offers up a psychedelic experience with neon lights and particles filling your screen and eyeballs. The dual-stick controls feel nearly perfect, and with more than 80 levels, a compelling multiplier system, and a progressive difficulty system that has you earning different colored belts like a karate class, Mutant Storm should satisfy your arcade shooter needs for a long, long time.