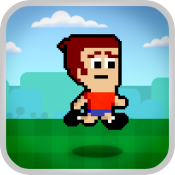 The platforming genre has been a staple of video games since Mario invaded our living rooms nearly three decades ago, and it’s a genre that thrives on iOS as well. Plenty of fantastic platformers were released to the App Store this year, in a variety of flavors. Some take the more traditional route and offer up the kind of running, jumping and enemy-stomping that you would expect from this kind of game, carried out through the use of virtual buttons.

Others tried to play up to the fact that virtual buttons can be a pain, and instead offered an auto-running kind of experience where simple well-timed taps would have your character negotiating the tricky terrain of cleverly designed levels. Some games focused more on exploration, some focused on speed running, and some focused more on combat or puzzles. Of course, some blended elements of everything together into a cohesive package.

One thing’s for certain, though, and that’s with the variety of different kinds of platforming games found on the App Store you’re bound to find a style that suits you personally. Here’s a list of the platforming games that we enjoyed the most throughout 2012.

Mikey Shorts, $1.99 / (Free) – [Review] – [Forum Thread] – [TA Plays] – Being the first release from a new developer, Mikey Shorts surprised everybody with just how fantastic it came out. It found a perfect balance between being a platformer that’s fun for anybody to play, as well as a highly competitive experience for those who obsessed over speedrunning its levels and competing with others on the leaderboards. Plus, it has excellent controls and a great sense of humor and style.

Mutant Mudds, $4.99 – [Forum Thread] – [TA Plays] – Already a well-established and beloved downloadable title on the Nintendo 3DS, Mutant Mudds made the transition to iOS very well, and has the chance to reach a much larger audience now. It’s slower-paced than most iOS platformers, requiring plenty of thought and well-timed jumps to reach the end of each level. Fantastic touch controls and a checkpoint system makes the task more manageable, and a whole host of secret levels and alternate endings fleshes out the experience even more.

League of Evil 2, $2.99 – [Review] – [Forum Thread] – One of our favorite iOS platformers of all time got a sequel this year, and delivered more of what we loved back in early 2011. Namely, tight controls and Super Meatboy-style quick-hit levels – short, sweet and extremely challenging. A brand new art style traded in the retro-pixel aesthetic for one that was more stylized and looked great on high resolution iOS screens.

Sonic The Hedgehog 4â„¢ Ep. II, Free / (Free) – [Review] – [Forum Thread] – Sega took a huge step in restoring gamers’ faith in the Sonic franchise with Sonic 4 Episode I in 2010, but as pretty as it looked and as hard as it tried to mimic the classic Sonic titles, something still felt a bit “off." Episode II this year improved that feel a lot, plus added team moves with Tails and a whole unlockable episode that followed Metal Sonic and his exploits after Sonic CD. While not perfect, Episode II was another great new Sonic game that I really enjoyed, and I hold out hope that Sega continues with the series.

Wimp: Who Stole My Pants? HD, $2.99 – [Review] – [Forum Thread] – [TA Plays] – Wimp came out of nowhere when it released this year, and turned plenty of heads. Great controls and plenty of clever puzzle elements made it a joy to play, as well as challenging. Its fantastic art style made it stand out with smooth animations and a ton of personality for a main character that’s essentially just a green ball of goo. New mechanics and abilities were introduced at a perfect pace, giving the game a great sense of progression that urged you to keep coming back, and a “3-star" reward system made it fun to explore every inch of a level to complete all its challenges.

Incoboto - GameClub, Free – [Review] – [Forum Thread] – While some of the puzzle-platforming elements in Incoboto failed to impress, the game more than made up for it with story, atmosphere, and emotional draw. The world is ending, and you have the overwhelming task of putting it back together piece by piece. Paramount to this task is your sun friend Helios, who doesn’t seem to have the capacity to offer compassion for this dying world. Though it looks bright and happy on the surface, Incoboto is oddly dark and melancholy, which is an incredibly unique position for a platforming game. It’s also what made us become drawn into the strange world of Incoboto this year, and recently the experience was shrunk down for the iPhone and felt just as powerful on the smaller screen.

Rayman Jungle Run, $2.99 – [Review] – [Forum Thread] – [TA Plays] – Ubisoft and Pasta Games were able to take the heart of the stunning Rayman Origins console and handheld game and repurpose it for a mobile device with a touchscreen. Rayman just runs his heart out through each level and it’s up to you to make sure he jumps, floats, and punches with pinpoint precision in order to reach the goal. Simple two-button controls allow you to focus on negotiating obstacles and collecting every last Lum, which is a satisfying challenge.

Mega Run - Redford's Adventure, Free – [Review] – [Forum Thread] – Trading in the endless and random nature of most runners, Mega Run was comprised of a ton of carefully crafted levels that encouraged you to explore, take alternate paths, and utilize different strategies to earn enough points to snag the coveted 3-stars. A Pixar-level visual style and a cast of colorful characters made Mega Run feel like you’re playing an interactive cartoon, somewhat fitting seeing as its follow-up title is the just-released Monsters Inc. Run ($1.99)

Polara, $2.99 / (Free) – [Review] – [Forum Thread] – [TA Plays] – Polara took your pretty standard endless running formula and turned it on its ear by adding in an Ikaruga-like polarity switching mechanic. It doesn’t sound like much, but that small change made Polara one of the more compelling and challenging runners, and a super smart progression system made it feel like you were always improving your skills at the game.