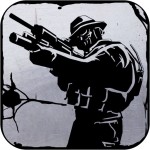 iOS gaming has come a long way since the humble beginnings in the homebrew community with the original iPhone and the official App Store launch following year. Mobile phone gaming has long since been considered a throwaway activity, with tiny games designed to eat up a spare few minutes of free time.

That hasn’t necessarily changed, but with the advent of smartphones and hardware that is getting more powerful with each new handset generation, those throwaway experiences are being flanked with deeper, more visually and mechanically advanced games that easily rival dedicated handheld gaming systems and even approaches some console and PC offerings.

In fact, “console-like”, a term that gets thrown around a lot, has really just come to mean “a deeper gaming experience than you’d normally expect from a phone game.” For mobile developers targeting this kind of experience, the more “console-like” they can make their games the better. 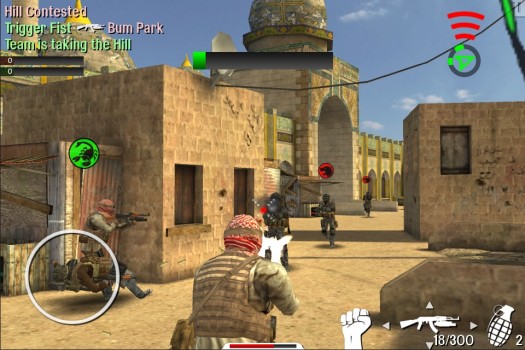 However, as impressive as mobile device hardware is these days, and as incredible as the visuals and expansive worlds that are now possible are, sometimes it’s what you don’t try cramming into your game that makes it succeed. Addition by subtraction, if you will. That’s how I’d describe Lake Effect’s new 3rd-person shooter Trigger Fist (Free), which doesn’t match other iOS shooters in terms of bullet points and features, but is actually more unique and a better fit for mobile because of it.

Trigger Fist’s most radical change from similar iOS shooters is this: you can’t aim up or down. Yep, just like in the earliest days of the first-person shooter genre with games like Wolfenstein 3D ($1.99) and Doom ($4.99), there is no y-axis to worry about. That might sound like a limitation, but the result is that Trigger Fist is much more focused on the pure act of shooting rather than fumbling with controls and precision aiming.

Of course, that could just be me. Personally I always end up struggling with virtual sticks when trying to aim and fire on someone in the heat of battle, so I totally appreciate the decision to streamline the aiming in Trigger Fist. It feels like an old-school frag fest, and that’s what I love about it. 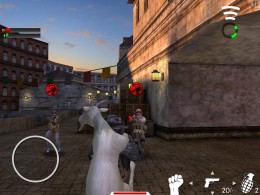 Now, if you’ve enjoyed some of iOS’s previous “console-like” shooters like the Modern Combat or N.O.V.A. series that feature dual-stick controls with full range of movement, then the annexing of the y-axis might not be for you. And that’s cool, I get that. The important thing is that Lake Effect tried something different, and whether it’s your thing or not at least there are options for the kinds of shooters we have on the App Store. Had this game been on a system like the Xbox 360 with its great dual-stick controller then it would feel like a step backwards. Here on the touch screen, it’s a boon.

While the core gameplay in Trigger Fist is solid, it won’t blow your hair back with its set of features. There is no story-based single-player campaign, or really any story at all for that matter. The entire game consists of 4 multiplayer modes: Free-for-all Deathmatch, Team Deathmatch, King of the Hill and Sacred Goat. The first 3 are self explanatory and standard fare for pretty much every shooter, though that’s not to say they aren’t still fun.

Sacred Goat though is a really interesting mode. It’s sort of a rendition of Oddball from Halo. You square off as teams of 4 with a random goat running around the map. You can pick up the goat and sling him over your shoulder. You only have use of your pistol while carrying the goat, and if you’re killed while he’s on your back he’ll scamper off for anybody to pick up. Your team wins by being the first to hold onto the goat for a set amount of total time. 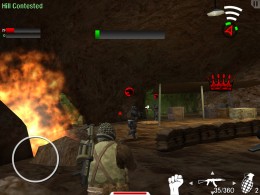 There are 6 maps currently in the game, and although they run the gamut of typical modern shooter environments visually, the level designs themselves are absolutely fantastic. Plenty of strategic locations and different tactics to discover, and they’re small enough to always keep the action a moment away without feeling tiny or cluttered. One downside to no vertical aiming is that the environments are completely flat, but that’s a sacrifice I’m willing to accept. Again, this feels like a modern day shooter with an old-school soul.

You can connect with friends or random players online for games for up to 8 player matches, but due to current Game Center limitations there can only ever be 4 human players at the same time. The remaining players are filled out with AI bots so you’ll always have a full match, and you can even play all 4 modes to your heart’s content completely offline with the bots if you wish.

Battling AI bots might not sound like the most exciting thing in the world, but the bots in Trigger Fist are something special. They far and away have the most intelligent and challenging AI I’ve ever seen in a mobile shooter. They flank you, intelligently utilize cover, use weapons wisely, team up with each other strategically, and generally play better than the majority of players you’d run into online. When you’re playing Trigger Fist but lack any sort of online connection you likely won’t even care as the AI makes the game a blast to play anyway. 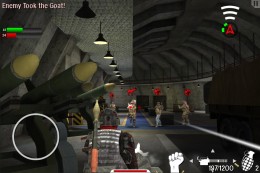 Besides the great touch screen controls and fast action, one of the things that’s kept me coming back to Trigger Fist is its upgrade system. Whether you’re playing online or off, you have 3 different classes of soldier that each level up independently: a Scout, a Rifleman and a Gunner. You can switch classes in between respawns during a game, and by using each you’ll earn experience that unlocks newer and better weapons and perks.

There’s not an overabundance of weapons or items, and the grind for some of the later items gets pretty intense, but it’s nice to have some goals to work towards. If you want you can level up instantly with IAP, but it’s in no way necessary and in my opinion would ruin what’s fun about playing. Plus, the higher tier weapons aren’t necessarily more powerful, rather they just offer different kinds of firepower.

For all the good things I have to say about Trigger Fist, it does have a few problems. It gets the job done visually, but is far from the best looking game out there. Its soundtrack and sound effects are also kind of generic, lacking punch. The biggest issue currently though is the overall flakiness of Game Center. Matchmaking struggles to find a full 4 players, and several of the leaderboards aren’t working. A fix is already submitted for these issues and should be out any day. Also, the player base has definitely grown since the game released last week, which has helped substantially with finding real players to match with.

There are definitely more “console-like” shooters on the App Store, but Trigger Fist succeeds by forgetting about consoles altogether and just making something that feels right for iOS. Some may see it as lacking features but I’d argue that it’s just streamlined and a better game for it. It has some minor issues, but the core ideas are executed to perfection, creating a shooter unlike anything else currently on iOS. Plus, it’s just damn fun to play, which is why I can’t seem to get enough.

Great touch controls, fast action, amazing AI, intelligent level design, and an overall simplicity are all the reasons Trigger Fist has caused such a lapse in my productivity as of late. Our forums are abuzz about the game too, so stop by there or the username trading thread and get in on the fragging.