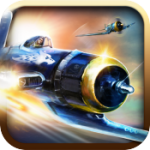 Sky Gamblers: Air Supremacy was a big deal when it launched back in March. It was one of the first games optimized for iPad 3, and it showed off that tablet’s capabilities as a game device well. In short, it was gorgeous and ran like a champ. But it was also a pretty good video game, which is why we’re stoked that a new follow-up has shown up on the App Store.

A couple of days ago, Sky Gamblers: Storm Raiders ($4.99) was released for iPhone and iPad, and it appears to be doing everything that its predecessor did right. For instance, it’s got a ton of visual bells and whistles; heat haze, radial blur, volumetric clouds, god rays, all that sort of stuff are included in the package. It also has massive campaign and online modes that put you in control of several different planes across a bunch of cool environments.

Another neat thing: Storm Raiders is set during WWII. Instead of modern jets, you’ll be flying around old WWII fighters across the pacific. It’s a change of pace that opens the game up to a few new features, including our current favorite, bullets ripping through the cockpit in real-time.

We’ll be giving this one a closer look for review, so stayed tuned. That said, it seems like a pretty safe bet for Sky Gamblers fans.