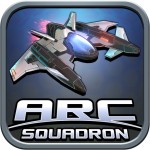 One of the coolest things to witness on iOS is when a developer creates a game that successfully makes a complete transition from traditional controls to touch mechanisms. Sure, a lot of games can get by through simply adding virtual control pads and buttons, but it’s the games that make perfect use of touch controls that feel much more natural and fun. ARC Squadron ($2.99) by Psyonix is one such game and is a blast to play on iOS. By including a simple but highly effective control scheme, a decent selection of beautifully detailed levels, and a great upgrade system, ARC Squadron embodies what makes an iOS game great and is a must-play.

As an elite pilot in the aptly named ARC Squadron, players are tasked with taking down the Guardians, a nefarious race bent on destroying the universe. You’ll fight the Guardians through a variety of on-rail stages that have you destroying enemy ships, collecting energy cubes and avoiding planetary obstacles. Clusters of levels culminate with boss stages, each of which require their own strategies and techniques. While the story is rather cliché, there’s still a lot to do in ARC Squadron, as completing the story unlocks harder difficulties to try. Normally, the basic formula and story described above would be enough for a decent game, but ARC does so much more. 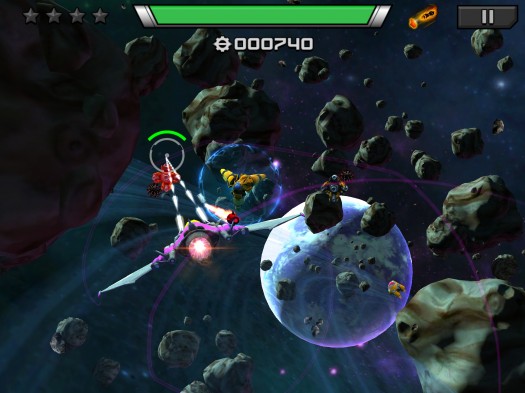 While the majority of your effort in ARC Squadron will be spent simply getting from level to level, a deeper secondary goal is available for players looking for perfection. Each mission completion is rated on a four star standard based on score. Sure, you earn points for destroying ships and collecting energy cubes, but the true strategy for hitting high scores lies in the potential for multipliers. Players earn score multipliers for destroying ships in rapid succession as well as for collecting energy cubes in succession. Additions like Game Center leaderboards and endless bonus missions that test your reflexes in a variety of different ways are appreciated as well.

I’m a huge fan of this dichotomy of gameplay mechanics. Not only does the star system provide an incentive to play levels again (thus increasing replayability), but it does it in a way that doesn’t feel like a chore. A lot of games with multiple objectives typically force players to choose between one or the other, effectively forcing you upfront to have to play multiple times. However, with ARC, the goals of passing the level and trying to get a 4-star rating work hand-in-hand, with skilled players accomplishing both simultaneously. It may sound like a small thing, but I think it’s indicative of just how tightly integrated all facets of ARC Squadron work, especially considering how scores double as currency. 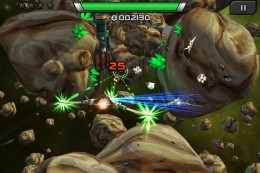 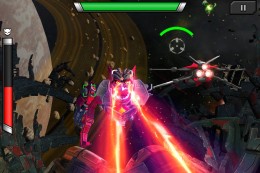 Another element that expands the gameplay in ARC Squadron is the wide variety of ships and upgrades available for purchase. Points earned in each stage act as your currency, which can be used to purchase and upgrade both weapons and ships. While new ships and upgrades are relatively benign (raising shields and laser power), weapon purchases are a little more interesting, with power-ups ranging from the offensive minded homing missiles and smart bombs to defensive options such as decoys. An IAP system for currency exists, but it’s so non-intrusive that it’s hardly worth mentioning.

When it comes to a game focused on accuracy and precision, pin-point controls are an absolute must. This is an aspect that ARC Squadron nails, and I think puts it above any other similar games. Rather than focuses on virtual joysticks or buttons, ARC utilizes a simpler control scheme that allows you to move your ship with a simple touch-and-drag. Swiping makes your ship do a barrel roll, allowing you to dodge attacks faster than with normal movement. Meanwhile, your standard cannon is on autopilot, shooting at anything that gets within its sight while secondary weapons are launched with a tap on the screen.

I’m a huge fan of the control scheme in ARC Squadron. Movement feels so intuitive, and the auto-fire is an excellent move, letting players focus on other aspects. Maneuvering your ship simply feels natural, which is a rarity for me. Also, if you think something like auto-pilot makes the game easy, trust me you’ll be way too busy dodging lasers and collecting energy cubes to worry, especially on harder difficulties. In fact, my only complaint lies in the fact that its too easy to launch your secondaries with an errant tap.

I’d be remiss if I didn’t mention ARC Squadron’s graphics, which look absolutely beautiful on current generation Retina-enabled iPhones and iPads. ARC’s framerate is incredibly smooth, which is a must for twitch-based gameplay. Meanwhile, the visuals themselves are extremely detailed, with ships and environments looking just as good as other space faring titles such as Galaxy on Fire II.

It’s obvious that Psyonix put a lot of care and effort into ARC Squadron and it certainly shows in all facets of the game. With a ton of content, smooth controls and visuals worth talking about, there’s little to not enjoy about ARC Squadron. Do yourself a favor and give it a try.