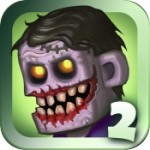 Today Brad and I sat down and did something that’s never ever been done on TouchArcade before: we played a video game with zombies in it. I know! It’s crazy. However, I think there might just be something to this whole “zombies in video games" thing, and it might actually catch on someday.

The zombie game in question is Mountain Sheep‘s Minigore 2: Zombies ($1.99), the long-awaited sequel to one of the App Store’s most notorious dual-stick shooters. You see that? It has “zombies" right in the title, so you KNOW that it is in fact a video game with zombies in it. I really appreciate that.

Anyway, Minigore 2 itself is actually an excellent little dual-stick shooter. Its core mechanics feel extremely similar to the original: run around mowing down wave after wave of enemies using various weapons, and try not to get overwhelmed by the horde and meet your demise. It was these finely-honed mechanics that defined the original Minigore, and they’re just as solid as ever in this new sequel.

Where Minigore 2 really differentiates itself is with the stupid amount of customization and upgradeable items Mountain Sheep has piled on top. Every game played nets you coins – at a decently fast rate too – that can then be used to purchase a variety of new weapons, consumable power-ups, and tons of different playable characters. These can then be upgraded further using coins, making you stronger and more resilient to the constant onslaught of zombies (among dozens of other types of enemies, I might add).

Everything comes together really well, and Minigore 2 feels like a true sequel that has improved upon the original in every way. Oh, and the visuals are fantastic, too. Not only can there be well over a hundred enemies on screen at once, but the blood effects in this game are bonkers. That is, if gore is your thing. I mean it is directly in the title of the game, and all.