The little things matter in flight games. When you crank up an engine, you want the jet exhaust to grease up the screen. You want to hear the thick, thunderous crack of a sound barrier break. And you want to feel like the world is insignificant as you slice through the air at 1500 MPH while a song that vaguely sounds like the one from that weird Cruise flick pounds in the background. Namco Bandai’s Sky Gamblers: Air Supremacy [$4.99] nails a lot of these little things, and while the premise sucks and it occasionally doesn’t look so great, few iOS games deliver as consistently as this one.

Backing up, Sky Gamblers is an arcade flight game that feels pretty similar to the Ace Combat series. It plays it loose with things like, say, physics and reality, but doesn’t try to pretend to be anything else other than an insanely fast-paced, action shooter in the air. It’s really good at leveraging these aspects, too: the sense of speed is fantastic and the maneuvering and shooting components feel blessedly fluid. These things define the experience. 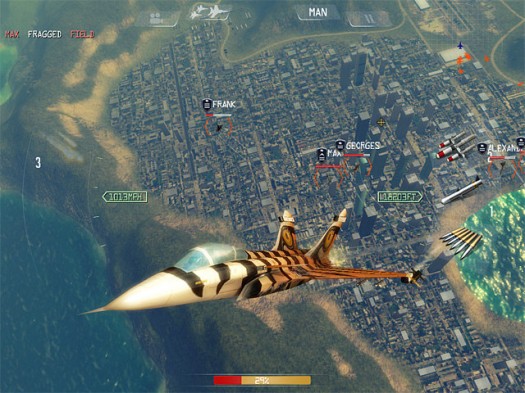 A good chunk of Apple’s faithful should know this game already. It was one of the two titles given a substantial demo at the new iPad press event. As expected, it delivers on a visual level. The assets, and particularly the planes, are rendered with a healthy respect for the new iPad’s higher resolution screen, and most of the environments look alright, too. This also boasts a ton of atmospheric and effects touches that bolster the pace-pumping, action scenarios that dot its content landscape.

But while it nails a lot of the little things, it flubs a few, too. In particular, some of the texture work on ground details and buildings and infantry are straight up ugly, and don’t reflect the work put into the rest of the title. The tutorial in particular is a mess, and the voice acting isn’t so good, either. 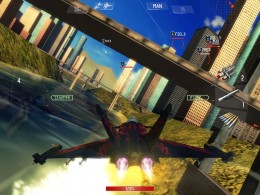 The thing that it gets the most wrong is its own story. Told through a jumble of comic book-style entries as if it were a Max Payne, the premise is a mess of poorly constructed context and devices. From what I can gather, you play as a hotshot pilot who, suddenly, finds himself without an army to call home. After a canyon run, you meet up with a group of lovable mercenaries and then join up.

There’s just enough reason in its madness to justify the fact that you’re in a plane and charged with killing people — a lot of people, in fact, across a campaign that tries to feature every environment, objective, enemy type, and color in the Game Design Handbook.

In the first mission, for example, you’ll fly alongside a squad on a quest to kill enemy fighters across a field and over the top of a city. Later, in a desert level, you’ll be asked to rip through enemy fighters while bombing ground infantry shortly before moving to a Bomb the Base objective. These layers and the sheer scale of each level hammer home the speed your craft can go, and that adds a palpable thrill to each confrontation or traveling section. Dogfights on the other hand reinforce the gracefulness of flight, as you’ll need to spiral or otherwise dance away from lock-ons, circle for position, and hunt your prey airplane-style. 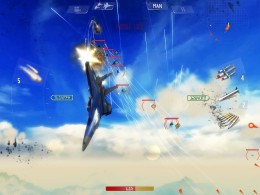 The latter is an important point: since Sky Gamblers doesn’t care about natural laws, there’s a distinct, teeth-rattling speed inherent in the combat design. Fights are all about how many bullets you can let loose while doing crazy stuff, like, say, flying upside down with the throttle all the way up. The same old flight game strategies still apply: you do want to get behind the enemy and execute successive passes, but the way you go about it in Sky Gamblers gives it an awesome edge. Everything just feels so fast; it’s bliss.

Flight games, strangely, have found a home on iOS. The controls seem to work, and this is no exception. The casual pro scheme in particular is great; the d-pad that controls the movement is robust and floats, and the pitch doesn’t get in the way. You can also use accelerometer controls, but those never clicked with me.

If the campaign doesn’t do it for you, then there’s a bounty of bonus modes and missions to check out. Team Deathmatch, Bomb the Base, and several survival modes are all ready to be played from the get-go. You can take these online, too, and the component seems, surprisingly, solid. I’ve yet to experience lag and the matchmaking is sharp.

If you have a new iPad, this is clearly one of THE games to get, as its boasting some of the best 3D, high resolution visuals at the moment. If you dig explode-y things and moving really fast, you’ll probably want to give this a look, too. Smart design bolsters both of these aspects. Check it out. 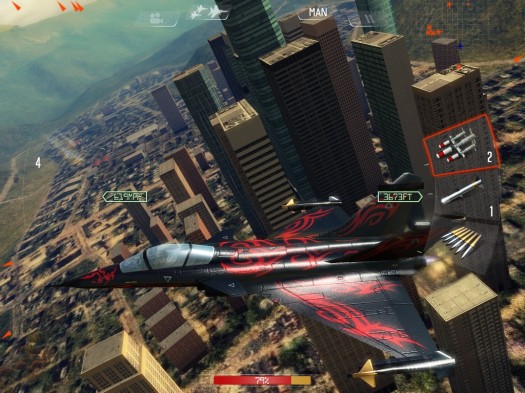 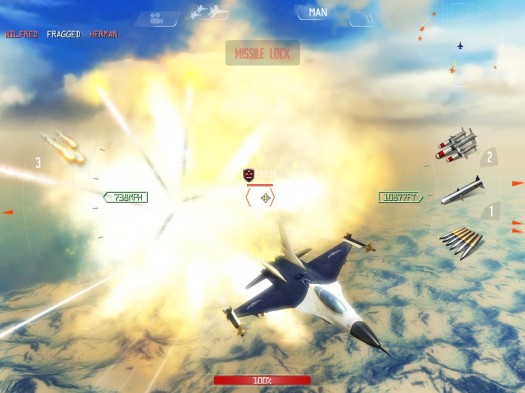