Audiosurf was the very first PC game I ever owned, and it still holds up as well now as it did back in 2008. Having a game that turned my obscure punk music into playable tracks was revolutionary, and ever since the App Store launched, I have been looking for a similar alternative to play on the go. Riddim Ribbon, from the makers of App Store relic Tap Tap Revenge, was the only one that got close, yet the restriction of only a few R&B tracks lessened the experience for myself personally. An Audiosurf game was also announced in 2012, but unfortunately never came to fruition. 7 long years later, Riff Racer ($0.99), from developers FOAM Entertainment, has not only filled this void but utterly smashed my expectations, because as well as including the musically-generated tracks to follow, they have also turned the Audiosurf formula into a complete stunt racing title, which looks as unfathomably awesome as it sounds. 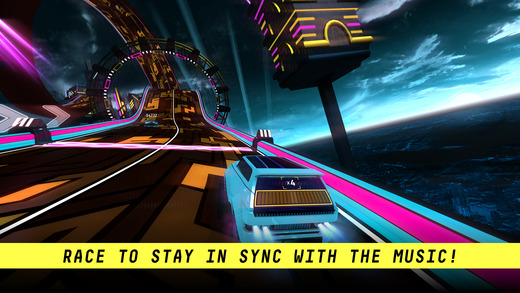 For anyone unfamiliar with the mechanics of Riff Racer, what the game does is turn any song on your iPhone into a specialised music tracks, whereby turns, jumps and obstacles match up with characteristics in that specific song. Best of all, it works with literally any track, so whether you’re more into classical pieces or heavier tracks, the game will do its best to cater to the music. There are also individual leaderboards for each song, so managing to reach the top for a specific track is a fantastic feeling, and becomes extremely compulsive in trying to claim your favourite albums – being able to race ghosts of other racers who have completed the same track only adds to the competition. Riff Racer adds in jumps, drifts and rolls, introducing more traditional driving game elements than similar titles such as Audiosurf offer.

If your music library is low on songs, Riff Racer comes with 25 free tracks that can be played, and also is compatible with Apple Music playlists, which should save some of the hassle for anyone who has signed up for the streaming service – but Spotify support somewhere down the line would be nice, even if I strongly doubt Apple have enabled the infrastructure for such a thing to happen. Regardless, for only $2.99 with only some cosmetic in app purchase options avilable, this is another essential premium iOS experience. I can’t wait to play Riff Racer, and if you’re a fan of racing or rhythm games, I’d definitely recommend giving it a test drive, and letting us know your impressions on our forum thread.