Hello, gentle readers, and welcome to the RPG Reload, the weekly feature where we usually take a look at an RPG from the App Store’s past to see how it holds up in the present day. We’re not going to be doing that this week, however. We just closed the book on the second year of this feature, with a hefty article delivered each and every week since the Reload launched on August 15th, 2014. I’ve covered more than 90 RPGs and/or RPG-related games, put together two large Christmas specials, done two year-end award ceremonies, recorded nearly 20 podcast episodes, and created a book-sized 12-part feature on the history of handheld RPGs. Our readers (you all!) have shown tremendous support to this weird, niche idea, and I’m always thankful for that. The Official RPG Reload Club thread in the forums just passed 1,000 posts, if you can believe that. It’s as good a time as any to take a little pause and consider where we’re going. Warning: this will be navel-gazey and bloggish. We’ll be back to the games next week, I promise. 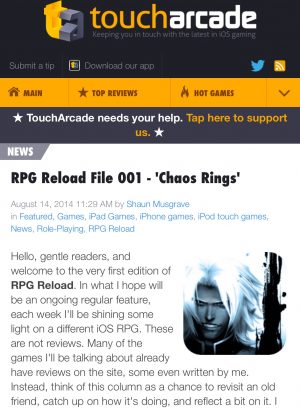 When I first pitched the idea of the RPG Reload to Eli and Jared, I was really just looking for an excuse to write about some of my favorite older RPGs on the platform. Being such a young market, relatively speaking, the mobile side of the hobby had shown little interest in retrospectives. News and reviews were heavily focused on the now. To a large extent, content is still that way. But I wanted to write about Chaos Rings, The Quest, and Saturday Morning RPG, by golly, and I’m very appreciative that Eli and Jared believed in my strange idea. Like a lot of people, I tend to overestimate how much effort I’m going to be able to put into projects, and so I rather boldly stuck a three digit number on that very first Reload. I remember someone in the comments jokingly asking what I would do when I reached the 1000th file. We’ll probably never know, but I took that as a challenge to at least use those three digits.

I passed the 100th column a while ago, thanks to specials and the history feature, but the actual RPG Reload Files are only a stone’s throw away themselves. That’s an awful lot of games. Along the way, I found some gems, got a new appreciation for some games, and found myself cooling on others. But more importantly, I started to find a new motivation for doing this column. I may have started selfishly, wanting to talk about specific games, but I soon realized that in some small way, I was doing my little part to try to improve mobile gaming. I firmly believe that mobile gaming is here to stay, and that means we all need to do our part to curate and record its history, no matter how little the major players in the business seem to be interested in that. I hope if nothing else that I’ve at least poked the rest of the mobile media into considering this responsibility. 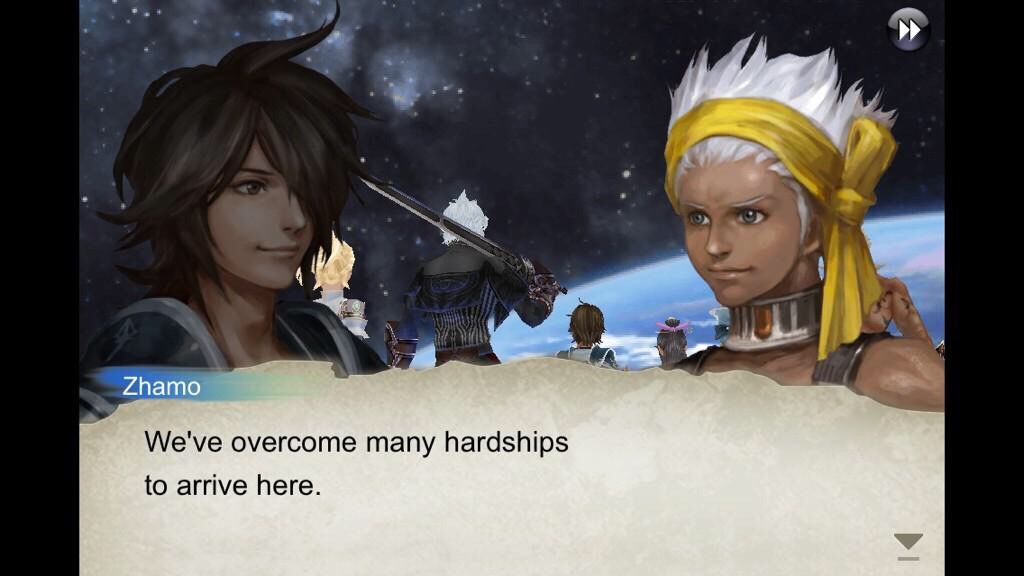 I’ve spoken to a lot of developers, many of whom have abandoned the platform or stopped making games altogether. I’ve heard stories of triumph and tragedy. A lot of that stuff didn’t fit into the themes or beats of the regular files, but I couldn’t help but think what a shame that was. These people have created, are creating the building blocks of a whole new branch of the gaming hobby, and the players who love their work never really get a chance to know them. So here’s the first news in this column: I’m going to be doing developer interviews on a monthly basis. In the coming months, I’ve already got some of the people behind Mangobile, Crescent Moon Games, Tin Man Games, and Rocketcat lined up. The goal is to have good, deep, general chats with these developers. We won’t be focusing on their next product or doing a promotion tour or anything. This is a chance to get to know the real people who make these games. I hope you all enjoy it.

The elephant in the corner next, I suppose. Many of you have expressed some worries about my health, sleep schedule, and so on. I genuinely appreciate the concern. As many of you know, I have a busy full-time job outside of my writing work, and a family to take care of. RPGs are big, complicated games, and though I love them dearly, they are time-consuming. Very time-consuming. The kindness of our readers has proven to be excellent fuel for my enthusiasm, but the reality is that I’ve been sleeping half-nights for a long time now, and as I slide rapidly down that hill to 40, it’s getting harder to summon energy reserves. 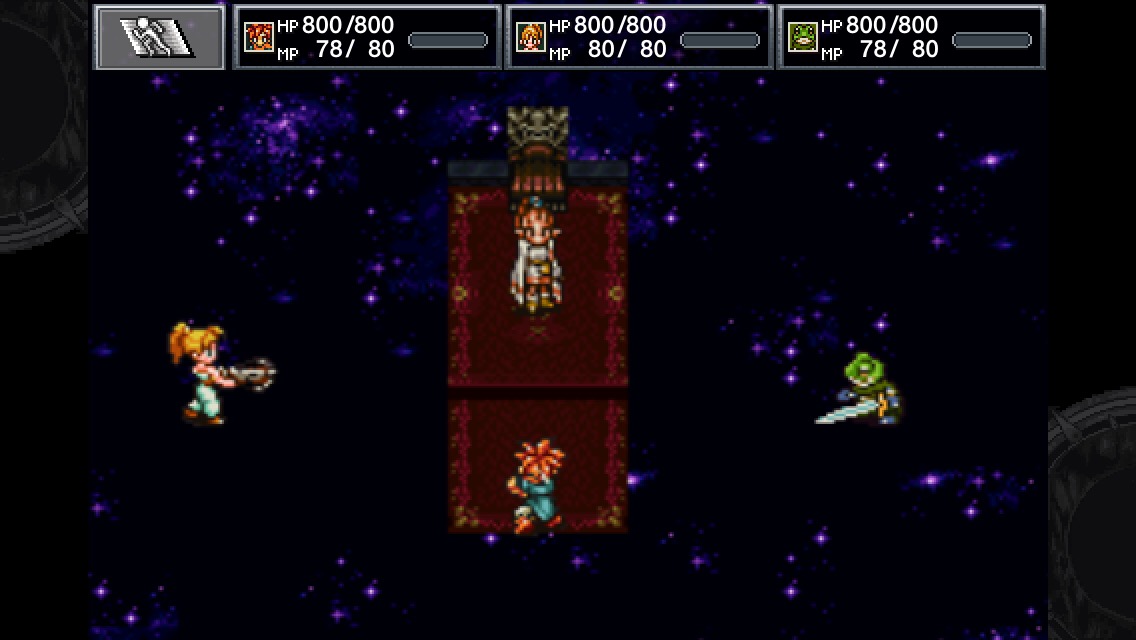 I attempted to relieve some of the work of the RPG Reload last year by switching out one file per month for my history project, but that proved to be even more time-consuming. I’m proud of it, but I’m also exhausted, which is why I’m yet to collect anything into a real book for you all. I apologize for that. I also apologize to one of our readers who is hearing-impaired and asked if I could somehow transcribe the podcasts. I haven’t made good on my promise to find a solution for you, and I am sorry. I simply don’t have enough time or money to solve the problem yet. I think about it every time I upload a new podcast episode and I really do mean to do something about it at some juncture when I find the resources.

In addition to my personal state, with almost 100 classic mobile RPGs covered, I’d be lying if I said I wasn’t worried about the road map for the future. The most popular games have largely been covered, and we’re getting to a point where keeping up a weekly schedule will probably force me to cover a lot of Kemco games or games that are less than a year old, and I’d rather not do either of those things. There are still some awesome RPGs to cover, but 40-50 per year (the schedule up until now) is going to have us out of things to talk about by the end of 2017. With dwindling candidates for full RPG Reload Files and an exhausted Shaun, something has to give. To say nothing of the fact that there are so many great non-RPG classics that deserve to have a little sunshine. I did a couple of Classic Reloads last year, but was unable to keep that plate spinning alongside the RPG Reload. 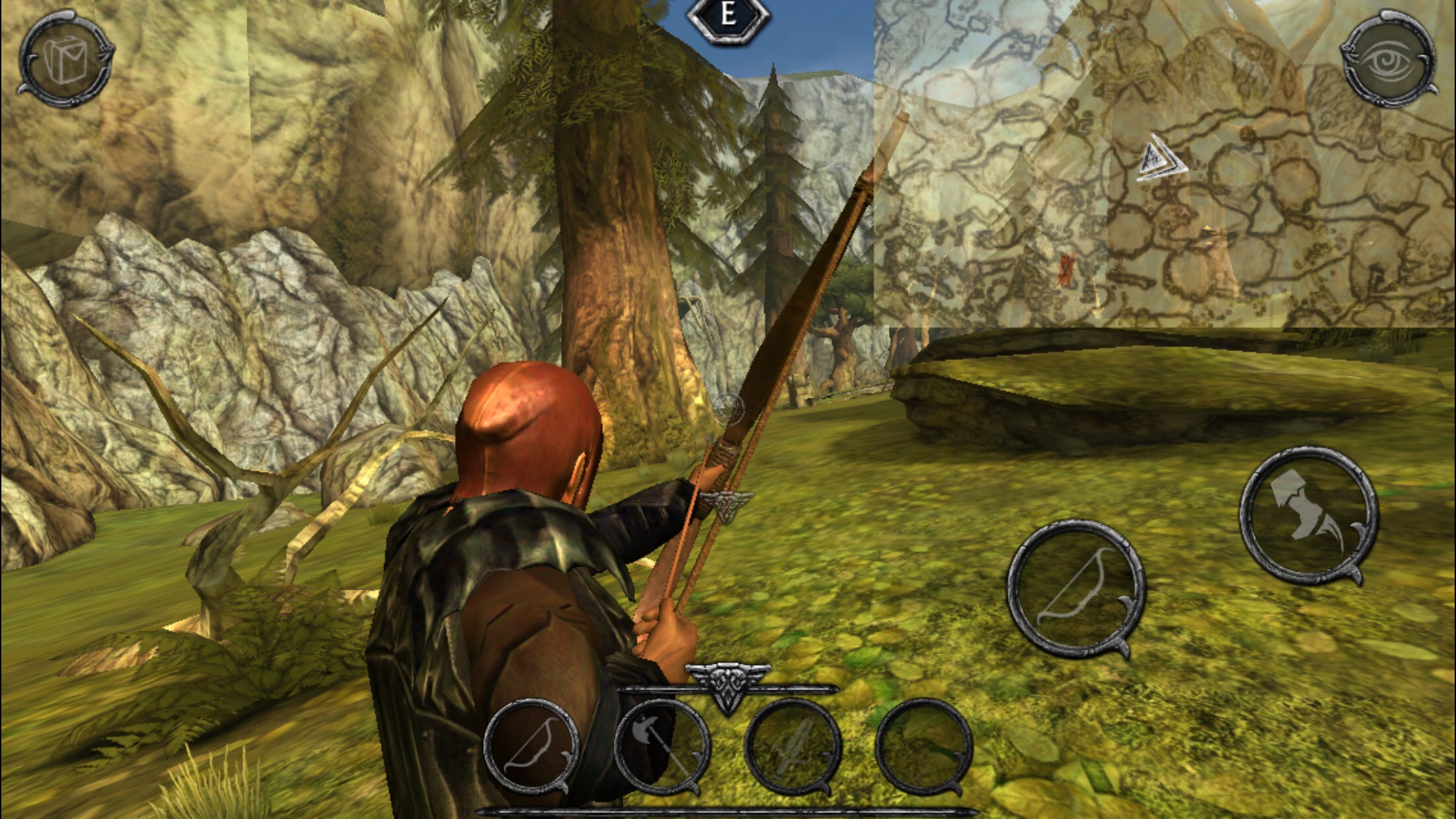 So with that all said, I’m going to lay out my loose plan for the future of this weekly feature, as clearly as I can at this point in time. For the rest of the year 2016, I’ll be doing one interview per month and one Classic Reload. The remaining weeks will be the usual RPG Reload Files, and we will of course have our Christmas Special and Golden Pancho Awards at the end of the year. That should see the year finish with RPG Reload File 100, which means I ended up using that third digit, if nothing else.

In 2017, things are going to be a bit more free-form. I’ll be doing monthly interviews for as long as I can find developers willing to talk to me. I’d like to do at least one Classic Reload per month. I want to do articles about RPGs in general, sometimes, or focused on a particular facet of the games. Naturally, I still want to do the occasional File, as well. But most of all, I really want to do something that involves the great community we’ve built here. I’m going to be kicking off a series called the RPG Reload Play-Along, which basically will work like a book club. There will be a featured game and a dedicated thread in the forums. We’ll all play together, share thoughts, post pictures, that kind of fun stuff. To help motivate people to join in, I’ll be randomly selecting one person per month from all the active participants and sending them a silly trinket from Japan, likely gaming or RPG-related. Playing old games is fun, but it’s more fun to play with friends, I think.

The podcast will also be allowed more freedom. Until now, we’ve had each month’s podcast featuring a game from the written articles for that month. From 2017 onward, we’re just going to feature whatever game we want. Yes, there will be a Chrono Trigger podcast. 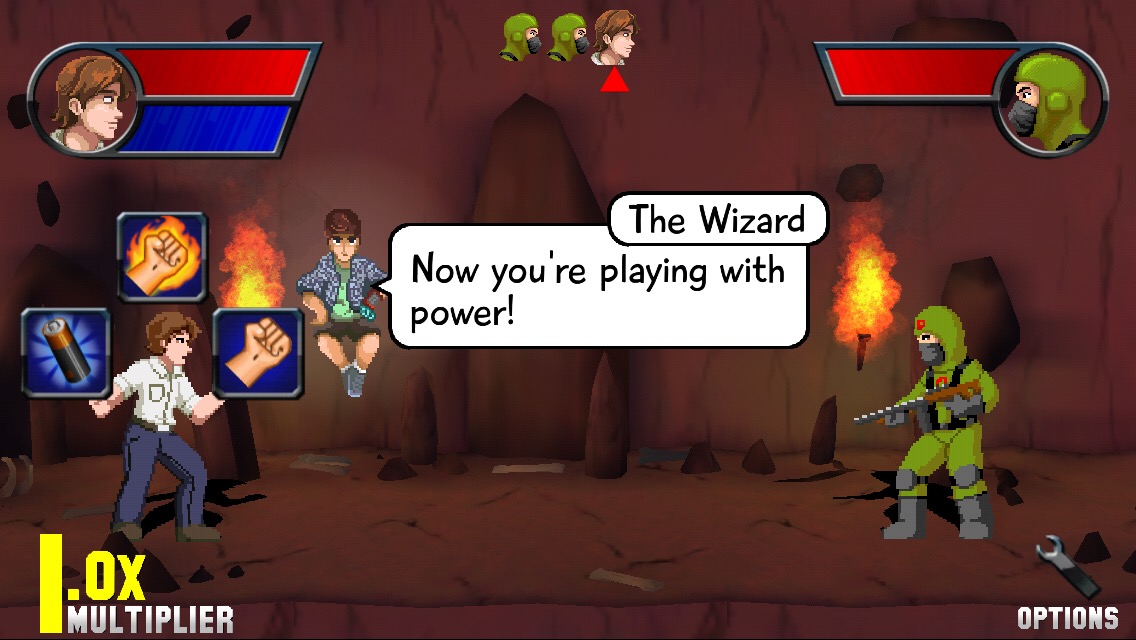 We’ll see how this all goes. If it crashes and burns, we’ll go back to the usual style. But if this works, I’ll have a little more time to breathe, everyone will be able to have some fun together, more games and developers will get a chance in the limelight, and we might be able to save Aerith after all. I might even be able to finish putting together the RPG Reload books. If you’ve read this far, thank you for indulging me. This week, and every week. We’ll have plenty of good times in the future, and with any luck, I can spend considerably less time digging through the trashbags outside of Kemco’s offices. Uh, metaphorically speaking. Yeah. Oh, and if you’re an RPG developer and want to get in on the interviews, please send a raven.

Anyway, next week I’ll be back with a more typical column, covering the strategy RPG The War of Eustrath. Be there with bells on, friends! You won’t be able to sneak up on me that way. Thanks as always for reading!