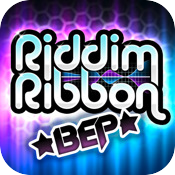 Nearly five months ago now Tapulous first announced Riddim Ribbon [App Store] on stage at an Apple keynote. Oddly enough, aside from graphical changes, the game that is available today is almost exactly what Tapulous promised at the event. Three songs from the Black Eyed Peas are included along with three additional 99¢ tracks available via in-app purchase. (Two by Tiësto and one by Benny Benassi.)

The objective of Riddim Ribbon is to guide a ball down a track, and tilt your device to follow a green line that moves left and right to one of the three songs you select on the main screen. When you stray from the track, the music begins to fade out until you’re only hearing the faint backbeat to the song. Laid out on the green line are silver spheres to pick up, ramps to jump over, and hoops to jump through. All of these different pickups and obstacles are arranged so you’re hitting them with the beat of the song, an experience that’s actually pretty cool if you haven’t played a similar racing rhythm game before. 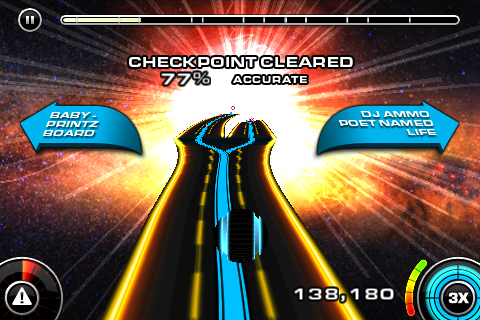 As you’re rolling down the tracks in Riddim Ribbon, you will be faced with both forks in the road and ramps that lead to secondary portions of track that allow you to mix the song by turning or jumping up on to the same portion of the song remixed by one of a number of different DJ’s included in the game. By replaying individual songs and choosing different paths to take, you can come up with a number of different remixes of the same song.

Riddim Ribbon is a game that sounds really cool when you describe it, yet it somehow manages to be not that fun at all when you’re playing it. The way the music is visualized is great, and the tracks are laid out very well to match each song. Unfortunately, it doesn’t take long to get bored of the three included songs, and the tilt controls are frustrating.

Instead of like most racing games where you tilt to move right or left, then hold your device level straight to go straight, the amount you tilt directly translates to your position on the track. This causes you to spend most of your time holding your device at an awkward angle instead of making small tilting movements to steer as you’re probably used to if you’ve played many racing games on the platform.

As mentioned previously, the way you interact with the music in the game is really neat but by default an announcer is almost constantly talking over it telling you how “dope" and “ill" your performance is along with announcing the many checkpoints on each song. It likely won’t take you long to turn this off in the options.

Riddim Ribbon is a great idea for a game that ultimately is ruined by frustrating controls and gameplay which is too easy to get bored of.