After a (very long) week with no Hearthstone (Free) League of Explorers to entertain us, we are back to our regular programming with today’s Wing 3, The Ruined City. In this Wing, you’ll fight against hordes of Naga and Murlocks in your attempt to make it through the Ruined City, get your hands on the third piece of the artifact, and in the process free Sir Finley Mrrgglton. The Bosses you’ll have to fight against are Lord Slitherspear, Giantfin, and Lady Nazj’ar, and some of the cards you’ll get are going to be really fun toys to play around with, especially Entomb, Naga Sea Witch, and the Legendary Sir Finley Mrrgglton. Overall, this Adventure has been quite fun so far but, more importantly, it has added cards that have shaken the meta, first among them Mr. Reno Jackson. While it’s still early to know how the meta will change once all the cards are released and we’ve had time to mess with them, I do think that we are in for some fun times in the aftermath of the League of Explorers.

This is an entertaining, if relatively simple, encounter, especially on Normal. His Hero Powers are Getting Hungry, which costs 2 Mana and Summons a Hungry Naga (a variety of Naga that are 1/1, 2/1, or 5/1 in Normal and 3/3 in Heroic), and Enrage!, which gives him +2 Attack this turn (+5 in Heroic). He also has cards like Slithering Archer, a 2/2 Deal 1 Damage minion in Normal (2/2 Dear 2 damage to all enemy minions in Heroic), and Slithering Guard, a 3/6 Taunt Minion in Normal (5/7 Taunt Minion in Heroic). In Normal you’ll get Sir Finley Mrrgglton as a 0/5 Taunt Minion on the opponent’s side, and when you kill him, he goes in your hand. If you don’t remember what this Legendary does, he let’s you Discover a new Hero Power, a pretty useful trick if you want to pick a class with appropriate minions for this Boss but would like a different Hero Power.

This Boss fight is mostly about controlling the board and making sure you carry enough board clears to deal with those Hungry Naga. Since each turn the Hungry Naga he summons gains an additional +1 Attack (+1/+1 in Heroic) over the one before it, you can guess how quickly the board will get out of control if you let it. You could also go OTK if you prefer, ignoring the Naga and kicking Slitherspear directly in the face. Cards you could also use are Mind Control Tech (to steal minions), Saboteur to slow down the Naga onslaught, Sacred Trial to also slow down his board (although this won’t really be that much help), and, of course, Vanish to reset the board.

If you are having a hard time taking him out in Heroic, try this OTK Priest Deck by Arti_09: 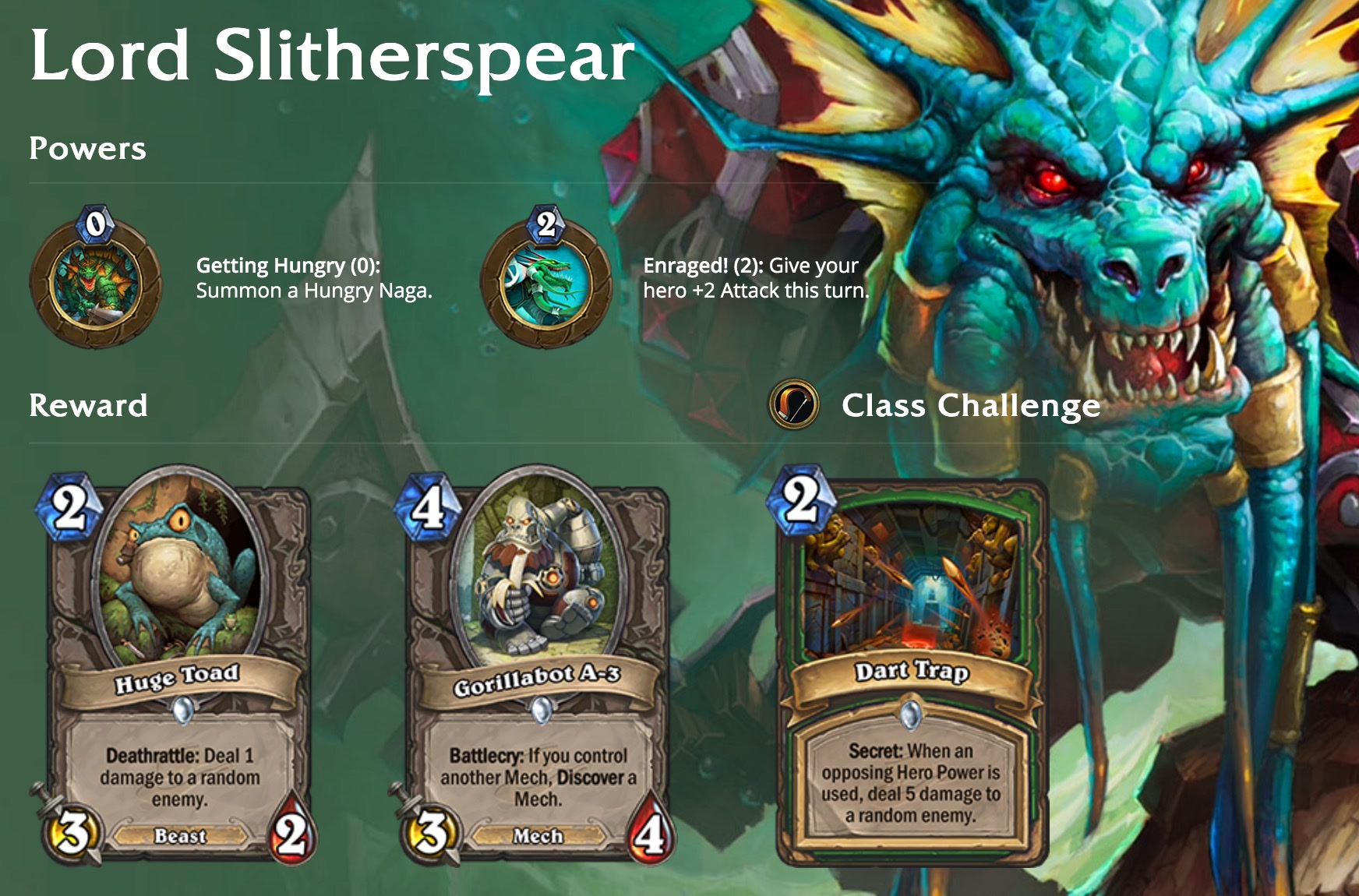 Guide to Defeating Giantfin in Normal and Heroic Mode

Well, isn’t this a fun Murloc party. Giantfin is, yes, a giant Murloc, and his Hero Power is Divine Favor, draw cards until you have as many in hand as your opponent, and costs 0 mana to play, so expect him to always have the right card to play (unless your hand is on the empty side). While some of you might think ‘Fatigue,’ he has many cards in his deck and his Murlocs have pretty good synergies, so I would choose another route to go about it. In Heroic he only draws two cards. He will be constantly flooding the board with Murlocs on his side, often using the Mrgl Mrgl Nyah Nyah (officially the weirdest-named card) that Summons 3 Murlocs (5 in Heroic) that died this game.

While clearing the board sounds like a good strategy, keep in mind that because Murlocs are cheap, he’ll be able to refill the board pretty much the next turn. So, pick consistent, strong board clears (Flamestrike, Blizzard, etc), and keep in mind that most Murlocs have low health so mass board clears will work better than strong minion clears. Explosive Sheep is also very useful. You’ll be facing Grimscale Oracle (which gives all other Murlocs +1 Attack), Murloc Tidecaller (which gains +1 Attack whenever a Murloc is summoned), Coldlight Seer (gives all other Murlocs +2 Health), Murloc Warleader (gives all other Murlocs +2/+1) and Old Murk Eye (has +1 Attack for each other Murloc on the battlefield). If you bring your own Murlocs to the dance, you can take advantage of some of the buffs since they’ll buff your Murlocs too.

If you are having a hard time beating Giantfin in Heroic, try MCFUser49454’s Freeze Mage: 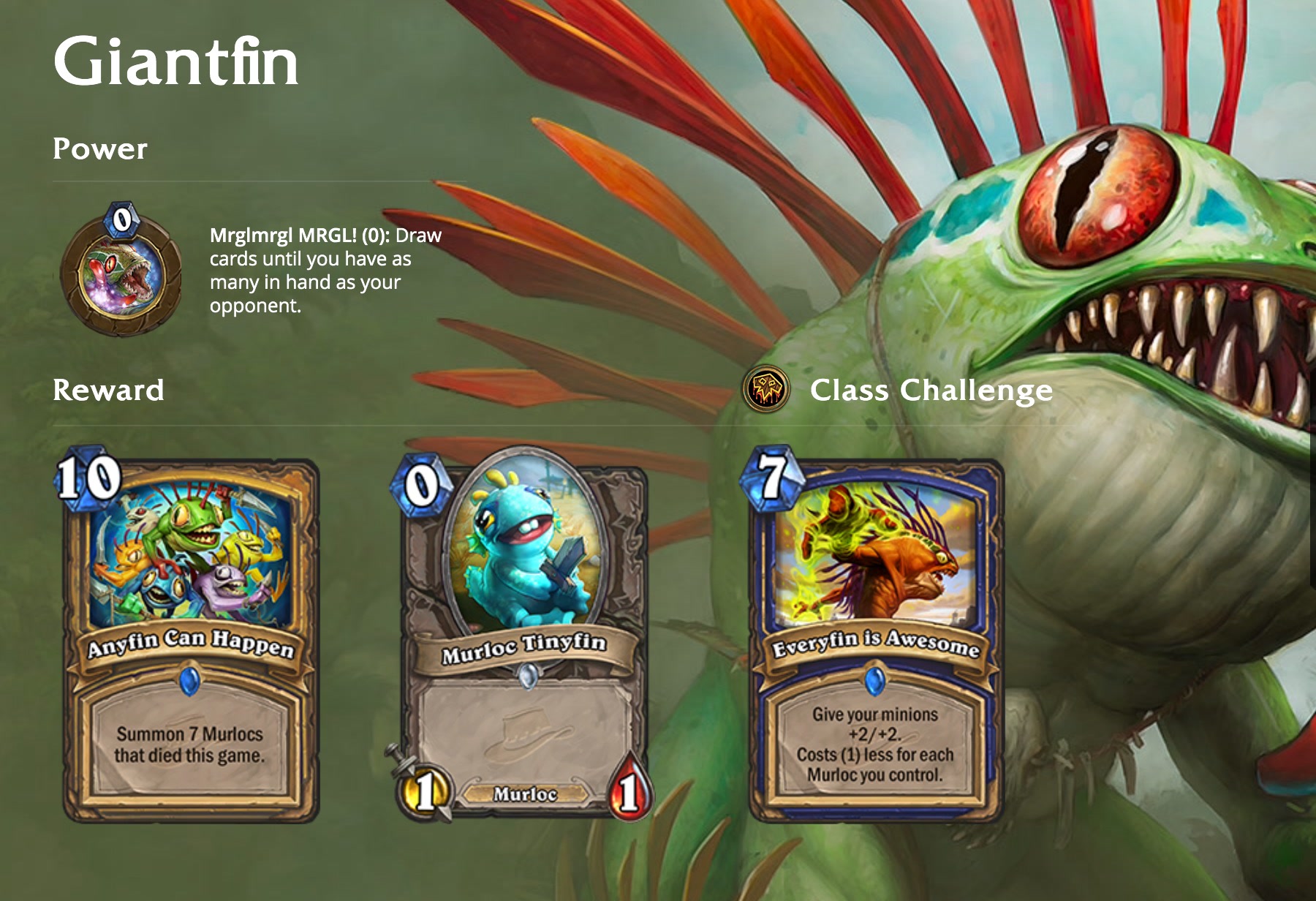 Guide to Defeating Lady Naz’jar on Normal and Heroic Mode

This was a fun, if RNG-heavy, encounter. Lady Naz’Jar’s Hero Power replaces all minions on the board with minions that cost 1 more, and she’ll use her Hero power at the end of her every turn. In Heroic, though, only her minions get upgraded and yours just get replaced with random same-cost minions. So, as you can imagine, your deck choice matters less than in previous encounters, but it still matters. Her deck has plenty of very cheap minions (like Murloc Tinyfin, Murloc Tidehunter, and Echoing Ooze), and spells that summon minions like Feral Spirit and Mirror Image, all of which work together to give Nas’Jar plenty of targets for her Hero power. In other words, if you don’t mess with her board constantly, she will get much more powerful each turn and while RNG will have a lot to do with how her board will look, the more targets the more chances you’ll find yourself faced with really powerful cards. She has 2 Lightning Storms in her deck, so keep that in mind when building your board.

You’ll need a good curve here to get minions on the board every single turn (including Turn 1), good removal (of course), and pretty sticky minions that won’t get killed the turn they are played. Minions or spells that create tokens are also great because of her Hero Power, so Muster for Battle, Unleash the Hounds, etc will work great. In general, you want to have minions on the board every single turn so you don’t get overwhelmed. If you want to bring Healing along, bring minions, not spells, so at least you continue having minions on the board. Also, spells like Mirror Entity will help in a pinch and keep in mind that freezing her minions works fine because her minions won’t upgrade until the end of her turn.

If you are having a hard defeating Lady Naz’jar, try deez4477’s Control Mage: 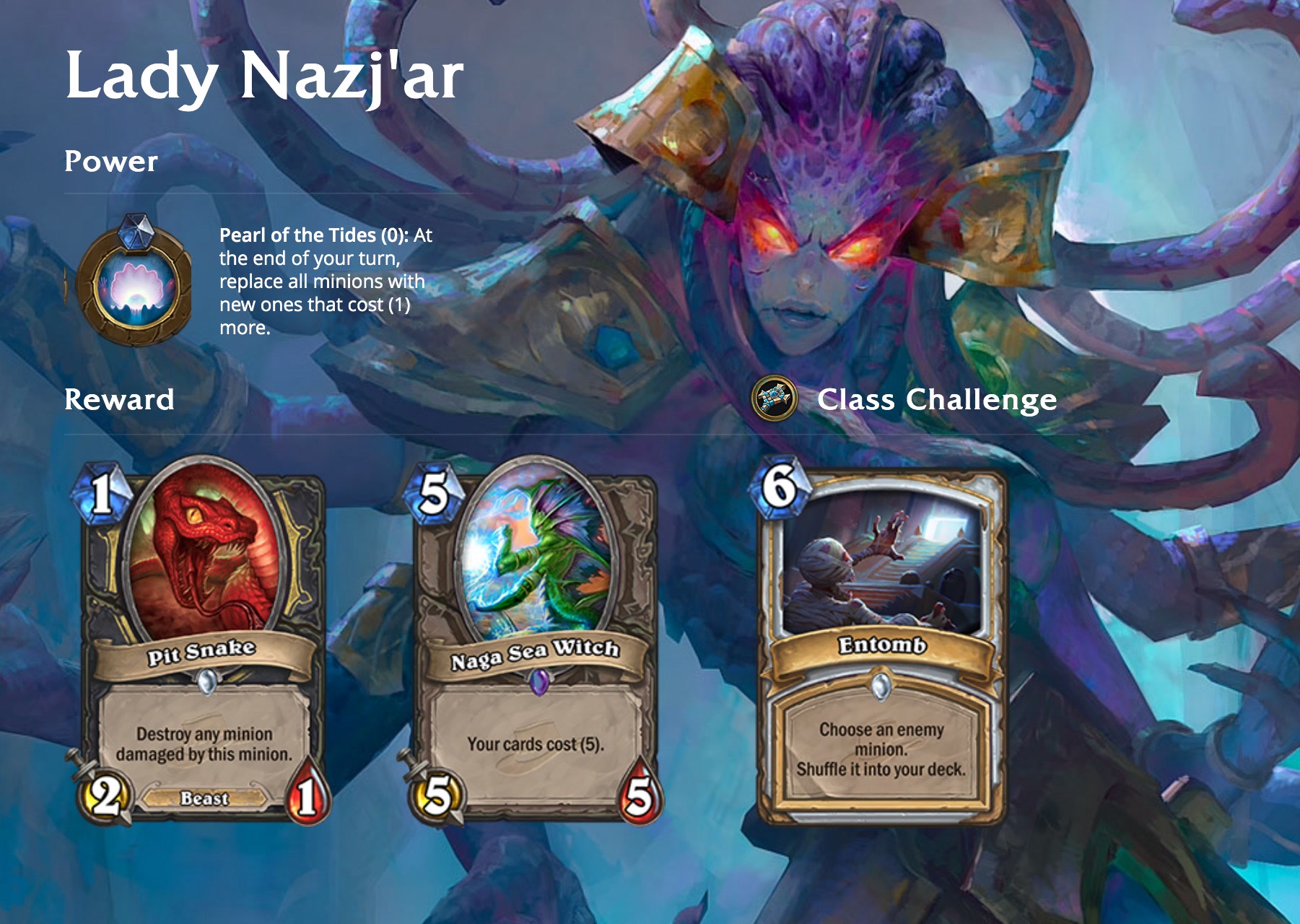 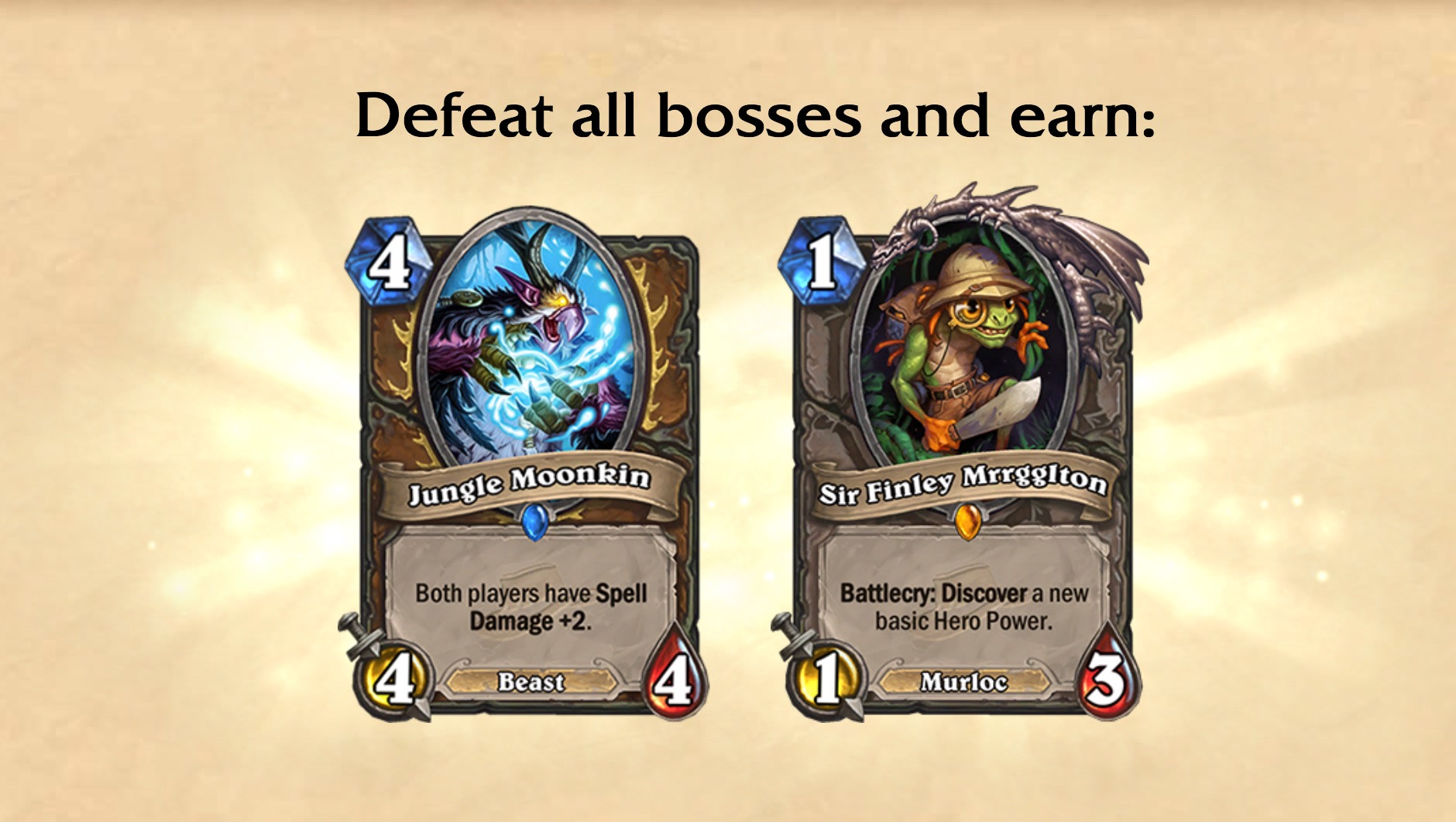