With Hearthstone (Free) League of Explorers First Wing officially behind us, we are now carefully entering the Second Wing, Uldaman. We’re now chasing the second piece of the artifact that lies deep within the halls of Uldaman, a very important location for dwarfs. Which is why Brann Bronzebeard himself will be coming along to help us make it through this wing. Similarly to the first Wing, Uldaman has two bosses to fight against and a level called the Mine Cart Rush that is similar in nature to the Temple Boss from last week. There are some very good cards to get this week like Tomb Spider, Unearthed Raptor, and, of course, the Legendary Brann Bronzebeard that makes battlecries trigger twice.

With Reno Jackson making such an impact since the card hit the game last week and with pretty much everyone running it, I can’t wait to see if Bronzebeard will have a similar effect. One thing is for sure; everyone is now much more excited about the impact the League of Explorers Adventure will have on the meta.

Guide to Defeating Chieftain Scarvash in Normal and Heroic Difficulty

Chieftain Scarvash has two Passive Hero Powers throughout the game that cycle with each turn. The first one is Trogg Hate Minions, which makes enemy minions cost 2 Mana more (11 Mana more in Heroic), and the second is Trogg Hate Spells, which makes spells cost 2 Mana more (11 Mana more in Heroic). As you can tell, you should build a deck with a curve that alternates minions and spells. Scarvash makes minions more expensive on the first turn, so plan your deck accordingly and make sure you mulligan for cheap spells so you don’t waste the first turn.

Hero Powers are unaffected by Trogg’s Hero Power, so your class pick becomes even more important for this Boss. In general, you want a deck with good low cost drops in the Normal mode, so Mage is a very good choice (as was the case last week).Because of the relatively low mana penalty, the Normal mode can be beat quite easily as long as your deck has relatively-low cost minions and spells.

In the Heroic Scarvash, however, things get much trickier compared to last week’s Heroic bosses. Scarvash starts with 30 Health and 15 Armor and has a Burly Rockjaw Trogg and a Stonesplinter Trogg already on the board. Add to that how the 11 Mana cost penalty renders you incapable of playing a minion or a spell (depending on the turn), and you get how important your decklist is going to be for this one. You can use weapons without a Mana penalty, so pick a Class that has strong weapons. And, of course, RNG will play a part because it also depends what you are going to draw and when. Scarvash will use cards like Confuse (which swaps Attack and Health of all minions), Dart Trap (the Secret that punishes you with 5 random damage for using your Hero power), and Burly Rockjaw Troggs that feed off your spells.

If you are having a hard time defeating Heroic Scarvash, use this Warrior deck by tingozhu 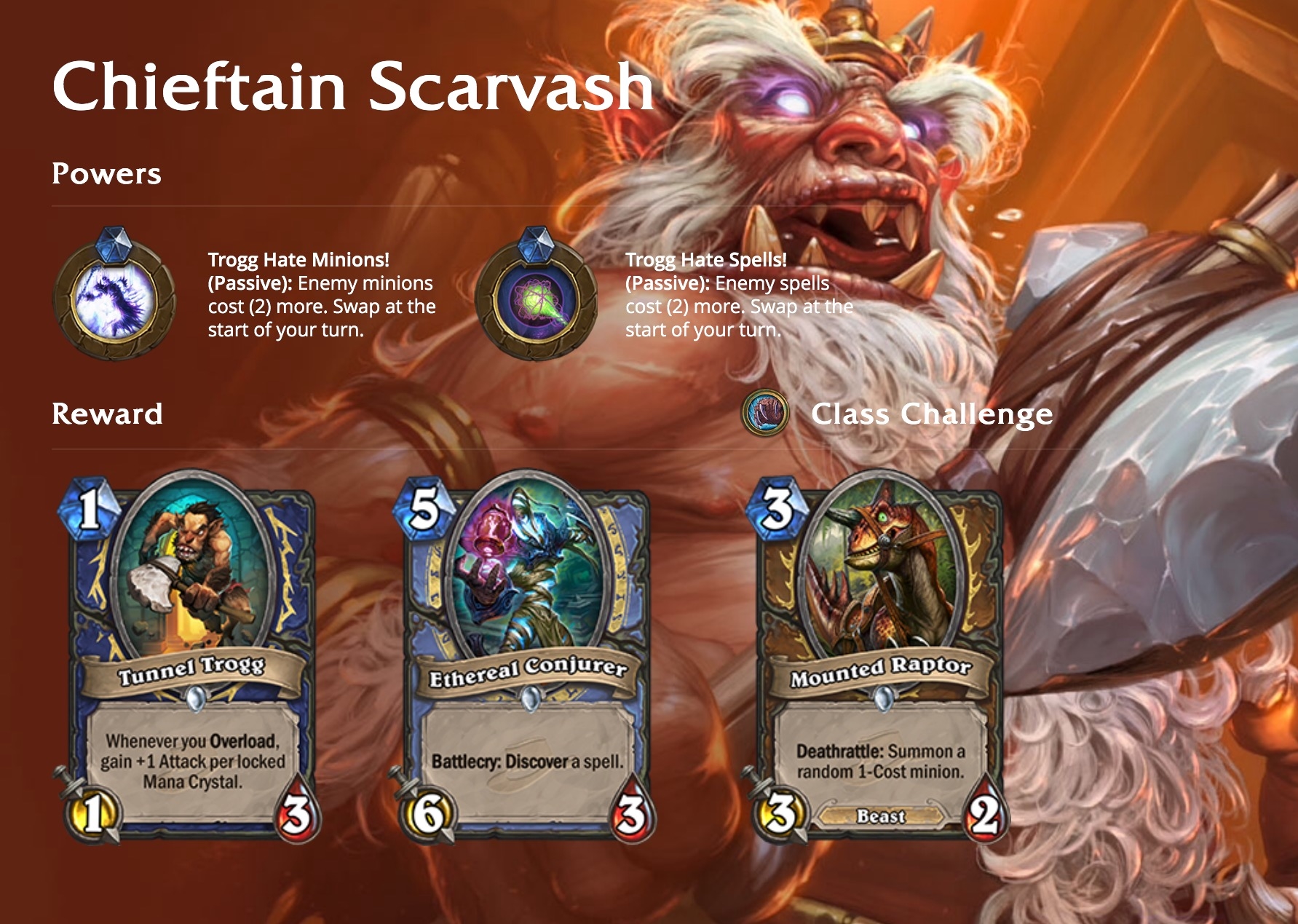 Guide to Defeating Mine Cart Rush in Normal and Heroic Difficulty

This is the first time we are getting a pre-made deck in League of Explorers. In this challenge you’ll have to survive for 9 turns against a steady rush of enemy minions. You’ll only have 2 Mana crystals a turn, and all your cards cost 1 Mana. The deck is made up of multiple copies of cards like the 3/6 Mechanical Parrot, Consult Brann (draw 3 cards), Boom (deal 3 damage to all enemy minions), Repairs (restore 10 health), Dynamite (deal 10 damage), Spiked Decoy (a 3/6 Taunt that can’t attack), and Barrel Forward (get 1 turn closer to the exit).

Your Hero Power causes 3 damage to a random enemy minion. The enemy minions are primarily 2/6 Chasing Trogg, 4/6 Earthen Pursuer, 6/6 Lumbering Golem, and Debris (0/3 Taunt). Each turn, you’ll have 2 more enemy minions on the board. This is a pretty tricky encounter because you really need to draw good cards early on before the board gets filled with enemy minions.

As you’ll notice, the enemy minions have either 3 or 6 health and your minions can do 3 damage. Add to that how you have one spell that deals 3 damage to all enemies and a Hero power that deals 3 damage, and you can see how you can keep the board under control. Don’t use your Hero Power unless you are guaranteed to kill an enemy. Try getting those Parrots and Spiked Decoys on the board so you have some presence and don’t waste them killing enemy minions; instead, try to get their health down to 3 so you can use your Boom spell. Of course that presupposes that you’ll have the Boom card, so try and use your Consult spell to get some Booms.

Use Parrots to take care of the Lumbering Golems but only put them on the board if they’ll take out the Golems; no point in wasting them and still getting hit in the face. Sometimes the draws won’t turn in your favor and you won’t be able to beat this challenge. Don’t think twice about conceding early if the draws aren’t favoring you; it’s that kind of a battle. The Heroic and Normal are exactly the same. 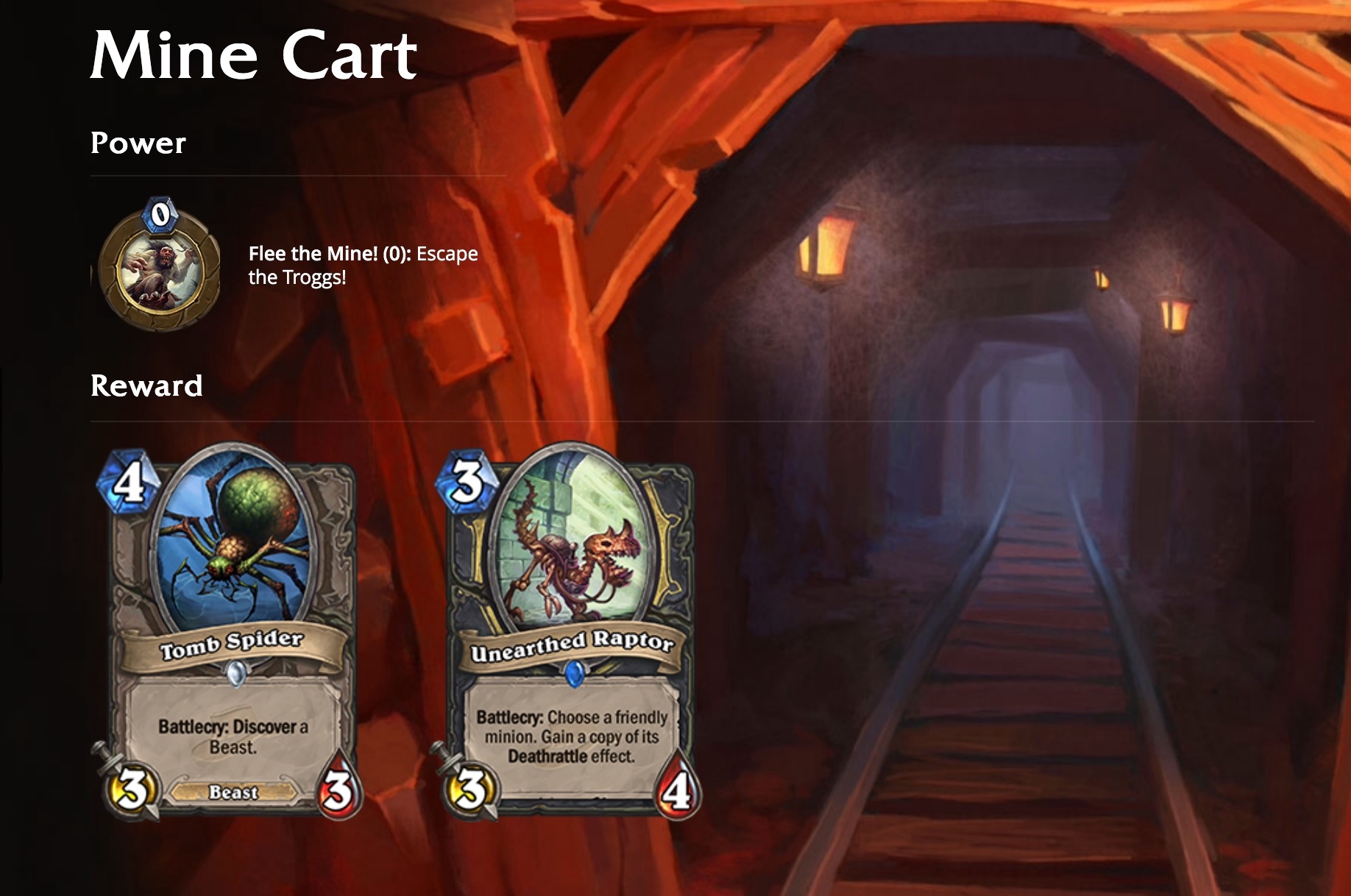 Guide to Defeating Archaedas in Normal and Heroic Difficulty

This Boss has 30 Health 15 Armor in Heroic and spawns minions for both but has plenty of ways to buff his minions. He summons 0/2 Earthen Statues for both players on Normal and 0/5 Earthen Statues on Heroic. He will then use Animate Earthen to give his minions +1/+1 and Taunt (+3/+3 and Taunt in Heroic). He also uses Shattering Spree which destroys all statues and deals 1 damage (3 in Heroic) for each statue destroyed. So, as you can guess, it’s not in your best interest to let him build up a board presence or even accept his statue ‘presents’ without buffing them and using them to take out his statues.

The best way to go about killing him is to go for a One Turn Kill play using buffs like Bloodlust or Savage Roar; anything to get all the statues buffed up quickly so you can deal massive amounts of damage. Try to control the board only if he has too many Statues hanging around that could shatter in your face. Shaman and Druid decks work well here because of the many ways they can buff minions on the board.

If you are having a hard time defeating the Heroic Archaedas, use LauraBF’s Shaman deck: 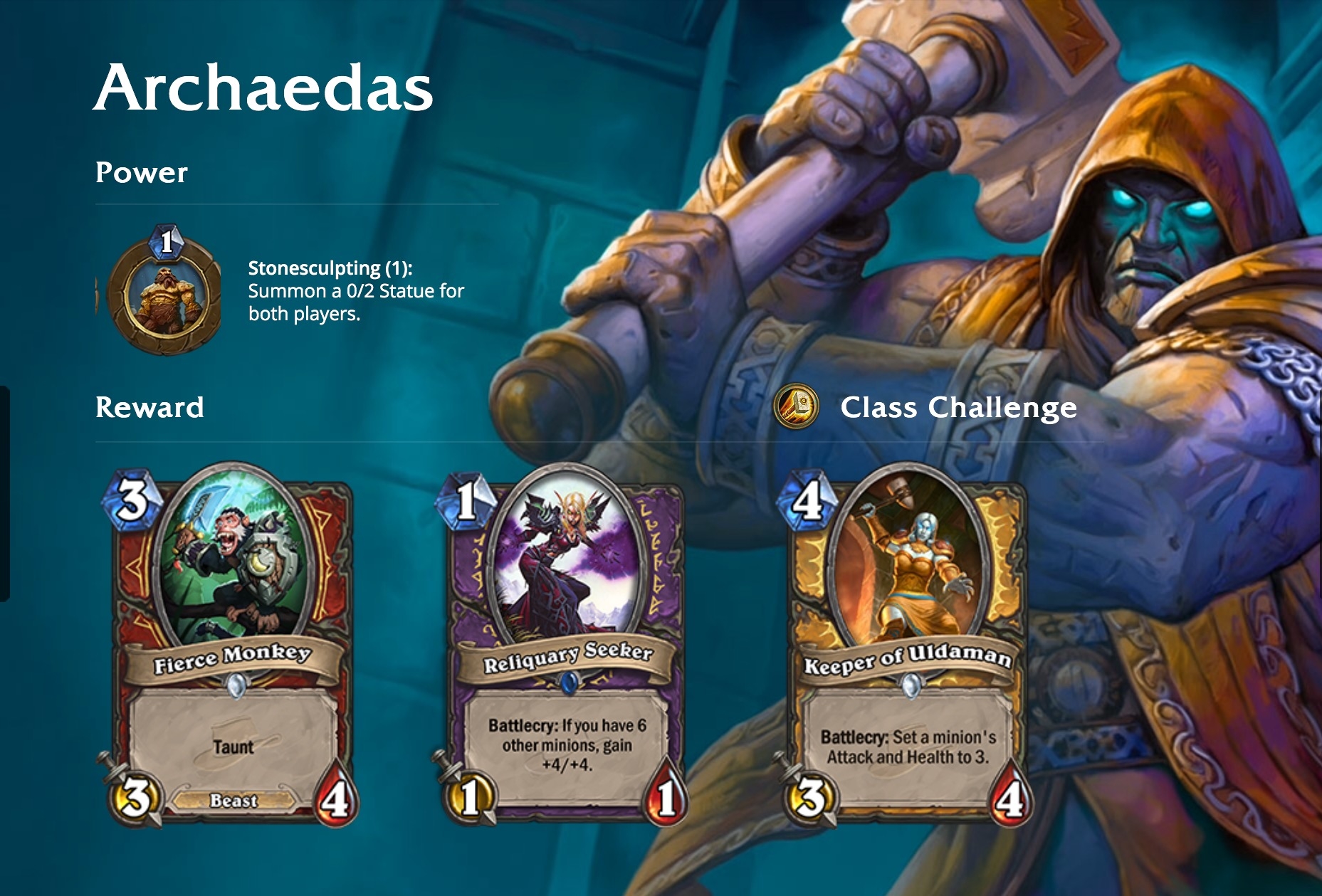 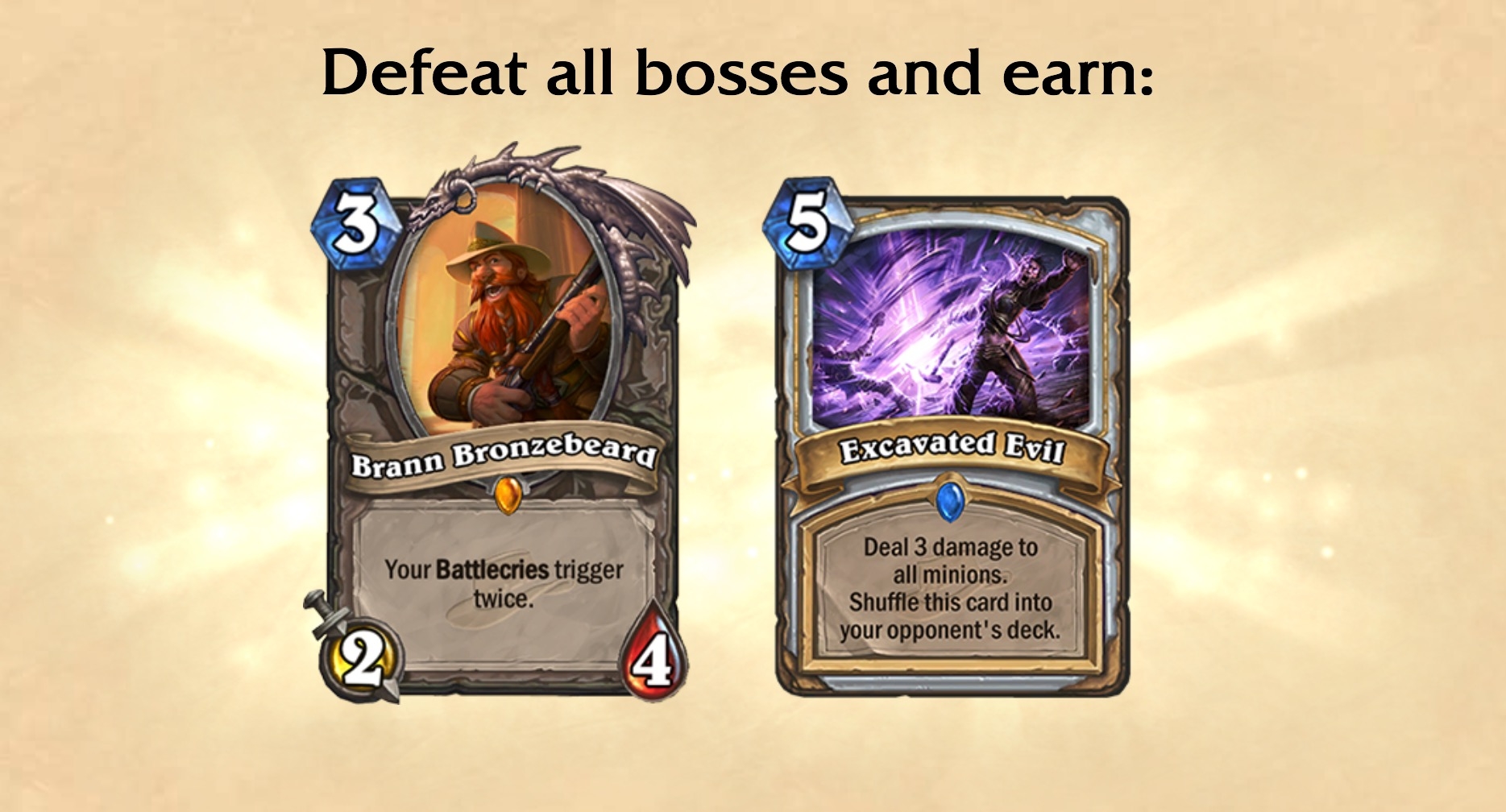