We’ve already covered the announcement of The League of Explorers, but I actually got to sit down at Blizzcon to play a part of the new adventure. The whole expansion is gloriously Indiana Jones-y, which was flawlessly exhibited in the Blizzcon demo. The Hearthstone team is getting super clever with these days with these single player encounters. In this particular one, you’re not even fighting an enemy as much as you’re fighting for your very survival. You’re escaping from a crumbling temple, and it’s going to take you ten turns to get out. You’ve got your normal load out of 30 life, which you might need all of to make it.

The whole thing is dripping with flavor, and if you want The League of Explorers to be totally fresh, I’d maybe just skip reading any further. The adventure will be out in a couple days, and with how clever a lot of this is, it might be better just going in knowing nothing. But, there’s going to be a ton of content released and spoiling one encounter isn’t that big of a deal, so, whatever.

The way these escape the temple levels are structured are filled with obstacles in the form of tower guards, defenses, and other bad guys in between you and the exit along with several decisions you can make along the way. These decisions are just like the Discover mechanic, and which one you choose largely depends on the situation you’re in at the time. The first turn a zombie chow comes out, and you’re given your first choice: Do you gain a mana crystal, or draw an extra card?

Mana crystals seem better, so that’s what I went for. The next turn an Oasis Snapjaw comes in to play, and you’ve got to deal with both this angry turtle as well as a pit of spikes which again provides a Discover-like prompt that feels like a Choose Your Own Adventure novel. You can either walk gingerly across the spikes and take five guaranteed damage, or swing across and potentially take no damage or ten damage.

Things get crazier from there, as if you make it to turn three, a rolling boulder gets played on your side of the battlefield. Each turn it rolls to the left, rolling over any minion in its way. When this is out, you’ll obviously want to pay extra attention to placing your dudes on the right instead of just flopping them out. 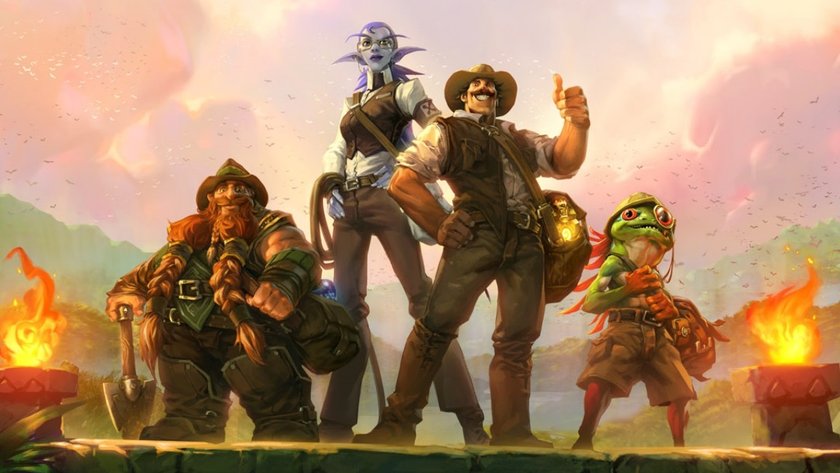 On the next turn, you stumble across a statue and are given a choice to either draw two cards or touch the statue and restore 10 health. I fell in the pit, so 10 health sounded pretty good… Unfortunately, in touching the statue it came to life and spawned a 10/10 minion. Thankfully, on my next turn, the ceiling collapsed and destroyed all the minions, taking the statue with it. Things get real from there.

On turn six, a 5/10 temple guard gets played, then on turn seven a Hogger-like 7/7 guardian who spawns 1/1 taunters each turn appears. With things getting hairy, you’re given another choice: You can summon a 7/7 golem for your enemy and be one step closer to the exit or just do nothing. More huge minions seems like a bad idea, so I did nothing.

On turn 8 you come across a 0/9 minion who does 2 damage to everything at the end of the turn, which is pretty terrible as you’re really hanging on by a thread by then… Things only get worse on turn 9 when two 10/3 insects appear. Make it through them, or really, just make it through this turn with any amount of life and you’ll successfully escape the temple.

This portion of the adventure was super clever, and I really like that Blizzard is still managing to figure out how to continue to spice things up in Hearthstone. Playing this level felt so different that initially it wasn’t even really super clear what you needed to do, as you straight up do not have an opponent to attack. The first wing of The League of Explorers unlocks this Thursday, and I can’t wait.