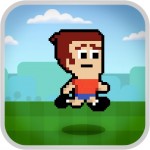 When I was six or so, I spent my afternoons in the house of a woman named Joan, tagging along with her three kids in an after-school care situation. It was there I got my first introduction to console games, playing things like Paperboy and Jeopardy! on their NES. But my first true love was Super Mario Bros. I wasn’t very good, but whenever my turn came around I’d play my little heart out, running across World 1-1, memorizing the jumps, eventually picking up the trickier hops in 1-2, and barrelling through over, and over, and over. Mikey Shorts ($1.99) brings that feeling back like it’s brand new.

Now, Mikey Shorts isn’t quite as complicated a game as Super Mario Bros. But that transcendent feeling, when you time each jump perfectly and soar past every enemy? It’s right here, and it brings me back to the late ’80s, piling on Joan’s sofa with a bunch of other kids and passing the controller back and forth. If I could just keep playing without dying, I’d get to go a little longer. That mindset makes it awfully hard to put Mikey Shorts back down. Just one more level, please? 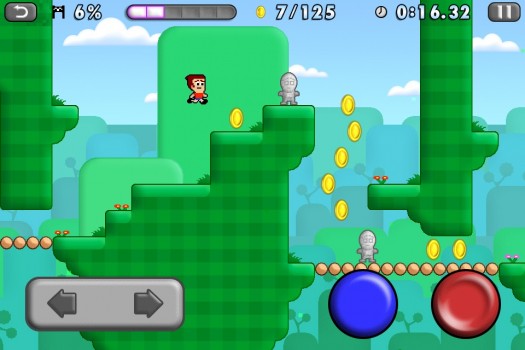 Story mode flies by in a flash. I sat down to give the game a look, and bam, 24 levels were under my belt. But that was just finishing the story, taking in the old-school tunes and watching the odd little cutscenes. Everything about Mikey Shorts is a little strange, visually speaking. Thankfully it plays a treat, and there’s a lot more to enjoy than just the first time through the tale.

Each story level has three goals: coins, speed, and shorts. Collecting every coin in a level sets one flag, and you’ll earn an achievement when you do so in every single level. Each level also has a hidden pair of golden shorts, a great reason to go back and explore meticulously. But speed, speed is where it’s at. 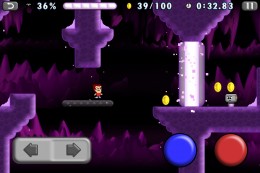 There’s a star ranking based on how quickly you can make it through. One star is a reasonably good showing. Two stars is not half bad. And three stars requires a run a hand’s width short of perfection. You only jump when needed, you never miss a jump or go the wrong way, you hit every statue required to progress on the first try, and the odd little patrolling robots don’t get in your way. You can stumble a tiny bit, but you simply cannot fall.

Each checkpoint you barrel through will show you if you’re going faster or slower than your best attempt, and that’s pretty cool. But head into the options and turn on ghost mode after your first run through. This lets you race another Mikey, Casper-style, and makes succeeding feel a lot like winning. Of course, you’re not really winning until you top the leaderboards, a fantastic excuse to keep shaving off milliseconds off your completion time. This is speedrun platforming at its most fun.

After a few levels, Mikey Shorts opens up with a Challenge mode. Instead of timing up, these levels count down, and the timers are tight. This is where the game gets kind of hard, and levels become larger and more complicated. Some are maze-like, others have branching paths you won’t have time to explore. No matter the twist, you need to get through very, very quickly. It’s a blast. 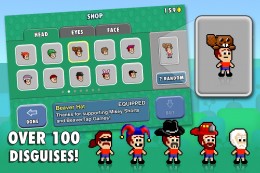 While the platforming in Mikey Shorts hearkens way, way back, the rest of the game is informed by an obvious love of more modern gaming—iOS gaming in particular. The controls are as flawless as virtual controls get, with just four buttons: left, right, jump and slide. Not flawless for you? Adjust them freely. The Game Center achievements are satisfying, and they provide great rewards: a whole whack of character customizations for little Mikey. If you want to play as Slash in a gas mask, you can do that. If you want to play as the Bearded One himself, there’s a pretty good facsimile in there too. You just have to earn (not buy—there’s no IAP to be found) the coins and unlock the beard.

The game’s look can be a little awkward at first, reminiscent of classic Mario but lacking its style. There’s no way I can find to describe the facial expressions of Mikey and the robots that surround him better than “perplexed." It gives the whole game an uncomfortable vibe that’s hard to shake. Hard, that is, until you get into the platforming zone and slide, soar and dodge like a kid who’s played these levels through thirty times and knows exactly where to go.

There are a lot of reasons to love a game. Great challenge, fun with friends, gorgeous design—all good reasons. Despite its rough edges, Mikey Shorts gets to me because it brings me to a place where I can play and have a great time, without hitting walls, without getting frustrated, without having to pass it on to the next kid in line. It’s a good feeling, one I don’t particularly want to give up.

So hey, BeaverTap Games. I know you’re around here somewhere. More Mikey Shorts, please? You’ve got me hooked, but I’m not six anymore. There’s only so many times I can replay these levels, guys. After the first hundred times, I swear I’m out.

For another look at Mikey Shorts, check out: TA Plays: ‘Mikey Shorts’ – A Platformer with Mass Appeal