It’s a uniquely lonely and melancholy game, and almost every visual and design tweak reinforces that. Inco, the protagonist and player-character, is tiny and feels insignificant next to the immense contraptions he has to manipulate to find new energy sources for his dying solar system; if you zoom the map out far enough, he disappears from sight completely.

Incoboto‘s elegant one-finger touch controls keep developer Fluttermind from having to implement a cluttered user interface, keeping players’ focus on only a few things at a time. The relative abundance of inky black sky only reinforces the idea that Inco is thoroughly alone. In fact, the only communication he receives are from outdated corporate memos and the fragmented death rattles of the dead and dying inhabitants of the Milky Way. 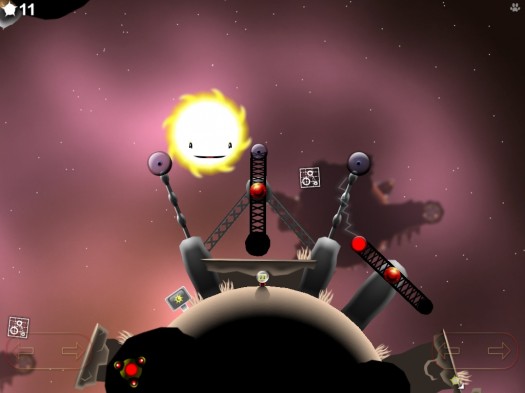 There’s a sentient star named Helios who chirps and bubbles his way through the galaxy  at Inco’s side, helping him solve puzzles and cannibalizing enough “starpieces" to reinvigorate the cosmos. Helios is consummately chipper, and puts Inco’s dire situation in sharp relief. The best science fiction makes the audience forget that the world is ending in favor of highlighting interpersonal relationships. It only takes a few minutes for Helios to become a charming and precious  sidekick, and Fluttermind achieve it with a few words of broken dialogue and a handful of facial animations. It also doesn’t hurt that cooperation with Helios is crucial to solving most of Incoboto‘s puzzles. Utility breeds empathy. 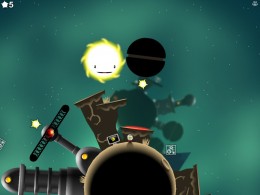 Nevertheless, Fluttermind bring a sort of streamlined efficiency to the rest of their game as well. There’s not a stray piece of dialogue to be found, or a single puzzle or mechanic that doesn’t build upon, integrate, or recontextualize something that came before it.

Incoboto‘s galaxy is comprised of a number of small clusters loaded up with machinery, contraptions, portals, force fields, and various other doo-dads designed to encumber Inco on his quest for starpieces. Each world or cluster introduces a new puzzle concept or piece of gear, usually accompanied by Tweet-able slogans or warnings from the cartoonishly evil, Cave-Johnson-era-Aperture-Science-esque Corporation. The worlds feel full and realized: as the Corporation spread, it makes sense that they’d leave defunct machinery in their wake, abandoned on planets slowly rotating about their axes. 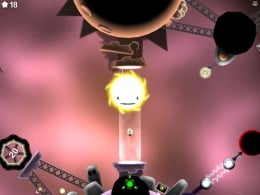 The comparison to Portal doesn’t come lightly. A large portion of the puzzles Inco must solve are portal based, and the basics of momentum will be crucial to understanding the toughest ones. More generally, Incoboto falls well within the broad spectrum of physics puzzle games.

Each gameplay chunk is relatively short and discrete — gates to new worlds are unlocked as Helios eats more starpieces — and each new section introduces a new mechanic, giving Incoboto a feeling of constant forward progress. The real trick is how seamlessly each of Incoboto‘s new lessons makes its way into the next series of puzzles, getting absorbed into an ever-expanding framework of mechanics and concepts. There are clear laws in Incoboto, but Fluttermind is at liberty to interpret them differently from world to world.

Each gameplay element — the puzzles, the bombs, the gravity beams — are relatively simple, but Fluttermind integrate them in such a way that the game never feels straightforward or boring. Incoboto‘s complexity is matched by smart, efficient pacing. I often felt like I was mastering a complex system in a short amount of time. It also makes each section feel meaningful and genuine, giving Incoboto the feel of a much larger and fully-featured game.

In other words, when Incoboto is firing on all cylinders, it’s an empowering puzzle game that makes its players feel smart and successful, like the last gear in a Swiss watch.

When Incoboto stretches too far — when the puzzles seem impossible or, more often, when the touch controls don’t live up to the platforming required of them — it comes crashing to a halt. I spent three days firmly, mind-numbingly stuck in the KindWord system last week.

Finally figuring KindWord out was its own reward, but a single huge breakthrough isn’t quite the same feeling as the joy of sustained momentum, of watching Incoboto‘s system gyrate in perfect harmony.  Incoboto is elegant and subdued, unafraid to juxtapose the vastness of the cosmos and the terror of inevitable burning out with the intimacy and charm of a small boy befriending a star. It’s tightly and efficiently designed and as much an experience as it is a game, one that I do hope you check out.