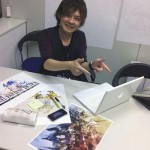 Square Enix’s Final Fantasy Tactics: The War of the Lions was getting close to becoming the Duke Nukem Forever of the App Store. It was announced back at E3 of last year. Since then, it missed its original September 15th release date, then got pushed back to “spring 2011". Spring came and went, then Squeenix announced it would be coming in June or July. That original estimate didn’t turn out to be too good either, as not long after, it was pushed back again. As long as I’m linking all of these relevant stories, I should also mention our Final Fantasy Tactics hands-on preview, which still is one of my favorite April Fools Day posts, even though it sure did make a lot of people angry.

ANYWAY! With all that backstory out of the way, I can get to the good news: Final Fantasy Tactics has been submitted to Apple for approval. I blasted out a tweet polling developers for recent App Store approval turnaround times lately, and assuming there aren’t any show stopping bugs or other reasons for apple to mash the big red “REJECT" button we could be playing FFT potentially as early as this Thursday, but more likely next Thursday, if Squeenix sees similar approval times.

This is exciting news, as Final Fantasy Tactics is basically the perfect game for the iPhone. (Yeah, I went there.) I’d still love to see them port more of the Final Fantasy games to iOS devices, and with how successful they all seem to be on the App Store, I can’t think of much reason why they won’t eventually. Either way, if you’re looking for a place to party with people similarly excited for FFT, swing by the thread in our forums.