Stray Robot Games is a New Zealand based studio, formed late in 2010 who have just released their first iOS game: Wooords [99¢], a minimalistic word game, which involves sliding fridge-magnets around the screen. You’ve probably seen puzzles in newspapers (or on the App Store) which involve forming as many words as possible from nine letters. One of the letters is the “key letter" and must appear in each word, and if you manage to put all the letters in the right order, you form an elusive “big word" and earn bonus points.

In Wooords, instead of typing words in (or writing them in a newspaper), you simply slide fridge-magnets around to form words, anywhere on the screen. The letters don’t have to be perfectly lined up, just adjoining, as the game is clever enough to detect when a word is formed and you’ll be rewarded with a burst of stars, a happy sound and some points. An awful lot of effort went into this design decision, too. 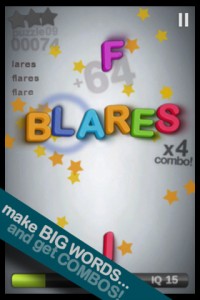 For instance, as you move the fridge-magnets, they make little clinking noises as they collide with each other. If you drag a letter between two other letters, they ease apart to make room. And if you form a larger word, the letters subtly decrease in size, so the word fits on the screen. If you shake your device the letters are randomly re-arranged. It’s shocking how well this all works.

There’s three game modes to choose from. In ‘Classic’ mode you have unlimited time to form words, which are rewarded by points and stars. Achieving one star unlocks the next puzzle (30 in total), but real satisfaction comes from obtaining the maximum three stars. This mode is about skill and persistence, rather than speed. The second mode is ‘Daily Words’, which is a daily competition to rank yourself against yourself, friends or the world. A fresh set of letters is released every 24 hours, which gives this game daily re-playability. And lastly, there’s ‘Word Jam’ which places an emphasis on both speed and skill. The goal is to reach the target score within the word and time limit. This involves completing quick-fire rounds, so speed is definitely a factor here.

Wooords can be played casually for fun, but don’t let the cute magnets fool you, this can also be a competitive game of speed, skill and strategy as you climb the Game Center leader-boards. The scoring in the old newspaper puzzles (and similar games) was based on the quantity of words found, with bonus points for nine-letter words. But in Wooords the scoring is far more advanced with multipliers for speed, and the number of syllables, which all contributes to the players score and overall “IQ level" rating.

This cute little game has already become a part of my daily routine. It’s fun to fling the magnets into words as quickly as possible and as the developer points out, you’re also exercising your brain, by testing your “vocabulary, speed and concentration". Wooords is even a universal game, which sweetens the deal even further.

Even though you might already have a ton of similar word games on your device, the clever refrigerator magnet-powered gameplay feels surprisingly fresh, and makes the UI used in previously released word games flat out seem archaic in comparison. Before downloading, be warned: Wooords will make your actual refrigerator magnets seem unresponsive and far less interesting!