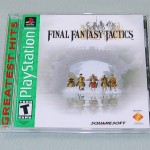 Originally released in Japan in summer of 1997, fellow North Americans would have to wait another half a year to get their hands on Final Fantasy Tactics, which is still regarded by many to be one of the best turn-based strategy games available. The game opens with a curious almost How I Met Your Mother story telling session where a historian tells you a tale of the past regarding the world of Ivalice, warriors, swords, swords, and stones. It’s a little cliche by today’s standards, it was just as amazing as all of Square’s other RPG’s when it was originally released.

Next, you’re guided through a somewhat unconventional character creation process where you create your hero and choose a birthdate. It isn’t immediately apparent, but the zodiac symbol that corresponds with that birthday actually plays a massive role in the game. (Arguably too massive.) Practically every action you take in battle can be either strengthened or weakened by what amounts to a game of zodiac game of rock paper scissors running in the background as some enemies are weak or strong to attacks that align with a certain sign. 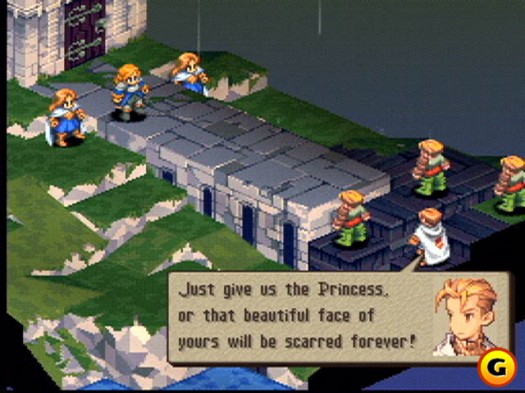 With that out of the way, you’re thrown into a tutorial battle where the game teaches you the basic mechanics that will be used throughout the rest of the game. In a nutshell, you learn about units having different movement ranges, how the active turn system works, and how you usually want to avoid attacking units from the front as you almost always do more damage attacking from the side or rear.

Final Fantasy Tactics is really a game of menu mastering. Menus and sub menus are everywhere that allow you to execute all kinds of strategies as units can be equipped differently and can hold different jobs which unlock new/varied abilities. The depth of all of these sub-systems is impressive, and while you can coast through the early parts of the game mostly ignoring them, actually completing Final Fantasy Tactics requires delving deep in to the job system.

I’m not entirely sure how much more of the gameplay is actually worth mentioning in this preview. Final Fantasy Tactics served as a fantastic foundation that has been imitated by countless other games. It combines all of the mechanics you’d expect in a Final Fantasy games such as magic, loot, and experience with a turn-based system that focuses the entire game on combat. There’s “world map" but it really only serves as a cleverly disguised menu to get you to your next battle. Needless to say, if fighting is your least favorite part about Final Fantasy games, feel free to skip this one.

The controls of Final Fantasy Tactics work well, although it feels a little backwards that the X button cancels while the circle button confirms choices. Other than that, hitting triangle brings up the menu, and square allows you to move the camera around. Alternatively, hitting the L1/L2 and R1/R2 shoulder buttons allow you to tilt, rotate, an zoom the camera.

The save system in the game feels a little antiquated, in the modern age of cloud-based storage and all. Regardless, playing the game will require one block on your PlayStation memory card. It also will require a PlayStation itself, as who knows when this game will finally hit the App Store.