To understand the Trism ($2.99) phenomenon and why Trism II ($2.99) is a historic game, even if it isn’t that great, we need to roll the clocks all the way back to April 17th, 2008- Before the App Store even launched. There was a lot of doubt surrounding how good games could even be on touchscreen devices, as most (if not all) mobile games of the time were played using a stylus in the case of the Palm Treo, the scroll ball (or joystick) in the case of the Blackberry, and similar input methods. Trism was among the first games to showcase just what was possible in a puzzle game where your only inputs were swiping and tilting. Check out this video from our first story on Trism:

The way the original played was, and still is, super clever. You slide rows of triangles to make matches, and then as those matches cleared themselves from the board, additional tiles slid in based on the orientation of your iPhone. The amount of depth the game had with its strategy was really sort of shocking, as stringing together your best matches involved a lot of thinking of which direction you wanted triangles to fill in from- Which really was unlike anything else available at the time.

We were so captivated by the game we posted about it a second and third time, calling it “one of the better buys currently available on the iTunes App Store" once it finally launched. Where Trism really started to make waves was when developer Steve Demeter revealed that he had made $250,000 in two months. Before then, most assumed that things on the App Store were doing OK, but being an Apple platform it was super reasonable to expect that selling iPhone games would be a lot like selling Mac games: Sure, there was money to be made there, but it wasn’t anything to shout about. This truly was a tweet heard ’round the world: 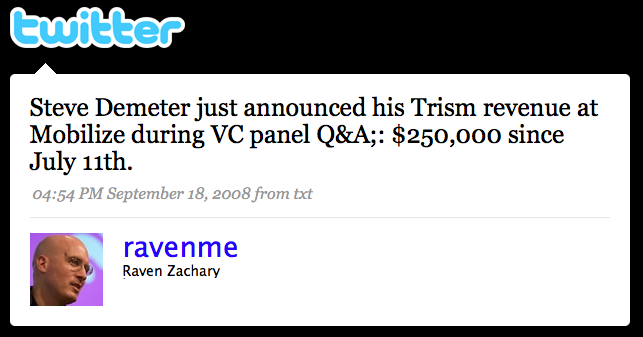 Steve’s brief mention of the profits of Trism was effectively the gunshot signaling the start of the App Store gold rush marathon. Suddenly, iPhone development was no longer this weird niche thing, and seemingly overnight everyone announced their upcoming App Store title.

Before Demeter single handedly kicked off the rush to iPhone development, he actually announced two new Trism games in the summer of 2008: Trism 2 which woud emphasize multiplayer gameplay and Trism: Puzzle Master which would expand on one of the specific game modes inside of Trism. Nearly ten years later from this announcement, Trism II is now available on the App Store.

The truly odd thing about Trism II and what makes this review super awkward to write, is if the game had a year long development cycle and was released in the summer of 2009, it would have been an instant classic. Trism was still in the minds (and phones) of most iOS gamers (particularly as we included it in our 2008 best games list, and it constantly was featured by Apple) and a sequel which adds new power-ups, a storyline, an item system, and everything else would have been a complete revolution compared to the incredibly basic titles that were flooding the App Store.

In 2018 though? The only people left who remember Trism are the oldest of old school iPhone gamers and anyone who has read books or articles on the history of the App Store. With the clout of Trism largely washed away by the sands of time, all we’re left with is a relic of a bygone era of App Store gaming and a $2.99 puzzle game that’s just kinda-sorta of OK at best. Stranger yet, practically everything that made the original Trism unique or interesting has been replaced by a odd assortment of ancillary mechanics that seem to just be borrowed from other popular puzzle games of the last decade.

For instance, instead of the ultra-clever tilting mechanic mentioned earlier, new triangles just sort of slide in from the top. Instead of sliding rows around with swiping gestures, you’re just tapping to drop triangles into a hexagonal grid, nearby triangles disappear, and if you match enough of them (or specific patterns of triangles) special powered up triangles spawn which can clear out many more triangles: Sort of like how matching multiple blocks works in … basically every puzzle game released now. 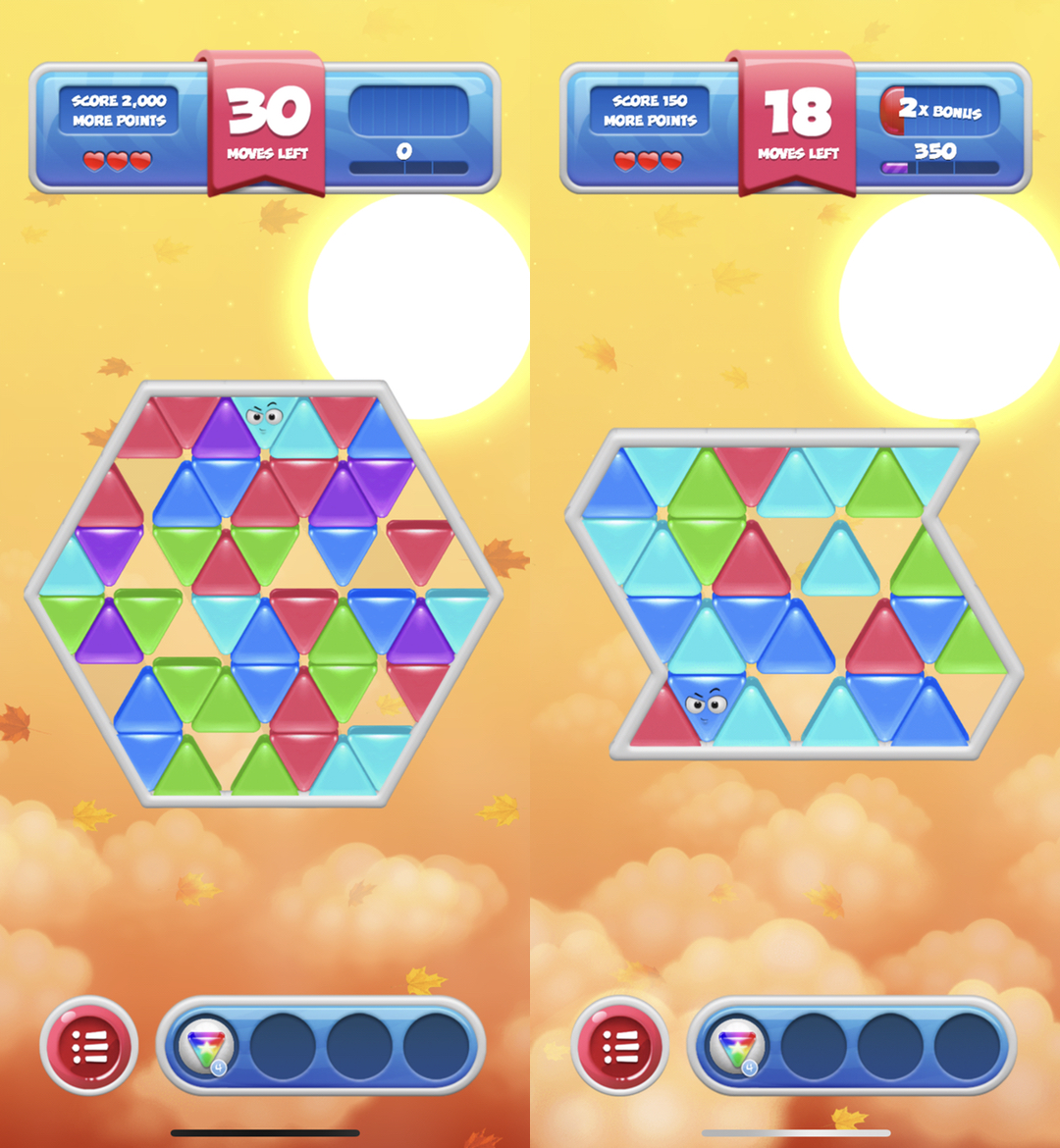 The levels themselves are also awkwardly structured at times, with moments where you’ll actively need to avoid finishing a level because you need a higher score to gain enough stars to unlock the next. One interesting element of scoring is the combo system, where you increase your score multiplier based on how many matches of a single color you make in a row without matching a different color. I have enjoyed the strategic element of setting up massive chains of matches, but often there isn’t often a whole lot of reason to go to the effort unless you’re just chasing a high score.

The absolute strangest addition, however, is an extensive amount of dialog in the game. If you’ve played any of King’s games, like the recently released Diamond Diaries Saga there’s definitely some exposition to set the scene, but it’s more or less limited to “Hey, you, gather diamonds." “Cool, you’ve got enough diamonds to make this piece of jewelry, go get more." Trism II has an unbelievable amount of game-stopping text for a puzzle game, both intensely explaining somewhat obvious game mechanics and expanding on a story, and cast of characters, which largely just feels unnecessary and a little weird. Performance of the game isn’t great either, with odd loading screens here and there that pop up- Even on my iPhone X. 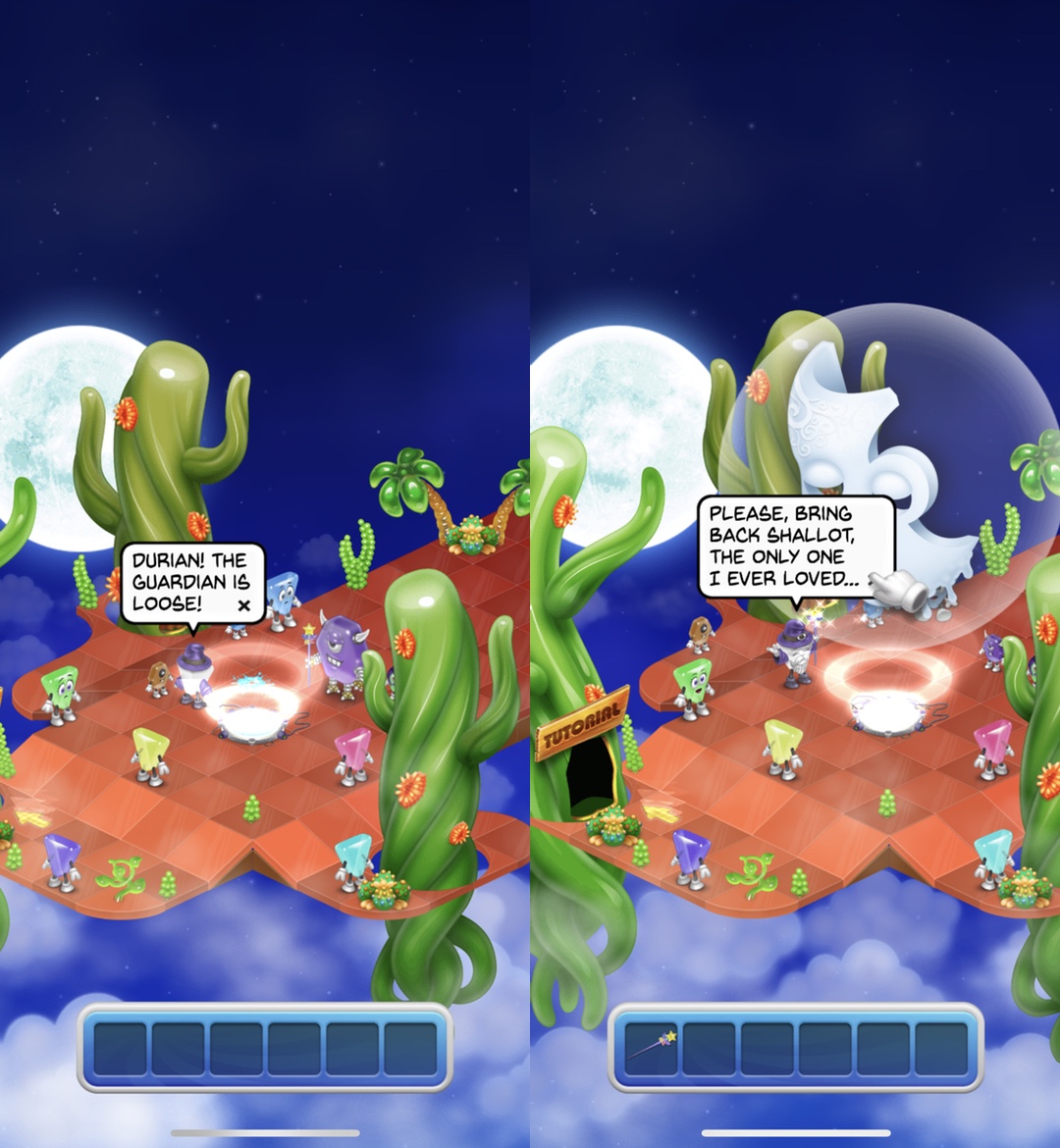 All that being said, Trism II is still an interesting piece of iOS gaming history. The game isn’t bad, it just feels odd to be released as a premium game in 2018 when the App Store is absolutely flooded with truly fantastic puzzle games (most of which are free). As we’ve mentioned many times on our podcast, the App Store is at a point where you really, really need to stand out to get any traction, and being yet another puzzle game that simply “isn’t bad" really isn’t enough.

This feels really weird to say, but if you haven’t heard of the Trism games, I’d just download the original. It works fine on iOS 11, although it hasn’t been updated for modern screen sizes so there are black bars. The tilting and sliding mechanics still feel unique, and the graphical styles and old school iPhone OS pop-ups give it a fabulous vintage flavor. Trism II is a bit harder to recommend, but if you’re among the many ultra old school iOS gamers still lurking around TouchArcade, it’s worth checking out just for the nostalgia blast and the sheer curiosity of playing a sequel to an iPhone classic that has been ten years in the making.