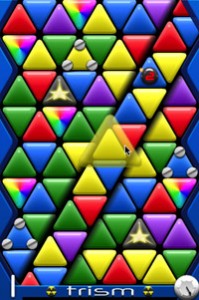 Trism [App Store] developer Steve Demeter revealed at a conference that he had generated $250,000 in income from his popular iPhone game since its launch on July 11th.

Trism is a gravity based puzzler which generated some press ahead of the App Store launch.

Trism presents the player with a playifeld populated by colorful, triangular tiles or “trisms.” The rows of trisms can be slid in six different directions (thanks to their triangluar shape) in order to achieve a match of three or more like-colored pieces. When a match is made, the like trisms disappear and surrounding trisms fall in to fill their place in the direction of gravity.

Trism is available from the App Store for $4.99. At that price, Trism would have had to have sold over 71,000 copies to generate that level of income, or an average of almost 1200 copies a day.

We had previously reviewed Trism and found the original game to be quite enjoyable and well worth the $4.99.