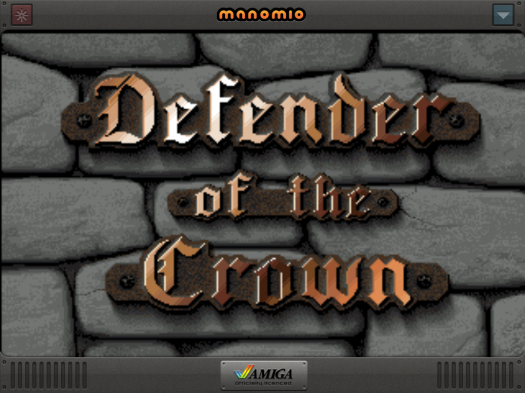 For quite some time now we have been tracking Manomio‘s upcoming iAmiga emulation system for iOS, designed as a sort of wrapper or delivery vehicle to bring licensed Amiga games to the App Store. At the end of last year, we posted an exclusive preview of the in-development system, including a demo video showing a number of classic test titles running quite well on an iPhone 4. One of the titles we played with back then was Cinemaware‘s classic 1986 strategy game, Defender of the Crown. I’m happy to report that this well-loved, fully-licensed 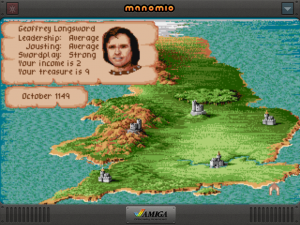 title will be the first iAmiga-powered game to land in the App Store, and that Manomio CEO Stuart Carnie was kind enough to grant us exclusive access to a near-release build of the game.

First, let me say a little bit about the game, for those that may be unfamiliar. Defender of the Crown is a strategy game set in medieval England. The player takes on the role of any of four Saxon knights in a bid to defeat the Norman invaders and fill the vacant throne of England. The original game manual, which is packed with historical information, tells the story well.

IT IS A TIME OF LEGENDS. A time for heroes. A time of bitter strife, when great men rise above their peers to perform great deeds. A chapter of history is in the making.

Your liege the king is dead, the throne vacant. Britain enters a season of destruction, a winter of killing that can end only when the last brave Saxon knight lies dead or the castles of the Normans lie in heaps of rubble, emptied of the foul oppressors who have enslaved your people. 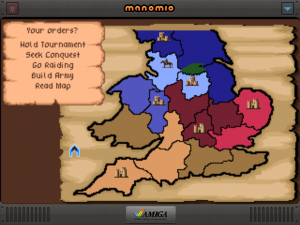 The game is centered around a Risk-style map of England on which the player builds and deploys troops in an effort to defend home territories and take land occupied by the Normans. The struggle involves field combat, castle raids (with catapults, even), jousting, rescuing damsels in distress, and the like. While some of the action is quite involved — jousting is a first-person affair, for instance — other portions of it are more high-level strategy, i.e. click attack, watch the stats columns update. The whole thing is laid out like a very interactive board game, as opposed to something more intricate and vast, such as the more recent Warcraft III or Starcraft II. It is 25 years old, after all.

Even though Defender of the Crown is now 25, the pixel artwork of the talented and renowned Jim Sachs is still lovely to behold — and I don’t think I’m talking through my retro blinders, there. Given that, I wanted to share an excerpt from Brian Bagnall’s excellent book On the Edge: 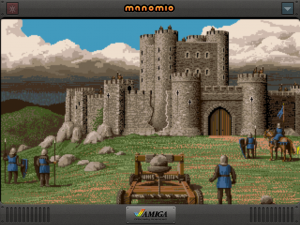 the Spectacular Rise and Fall of Commodore, to help convey just how actually jarring an experience it was to see the game for the first time back in 1986.

[Amiga co-creator R.J.] Mical saw artist Jim Sachs push the Amiga to its full potential. “Jim Sachs, what a God he is," marvels Mical. “Jim Sachs is amazing. These days everyone sees graphics like that because there are a lot of really good computer graphics artists now, but back then, 20 years ago, it was astonishing to have someone that good."

The final game was a landmark in video game production values. As game designer Bob Lindstrom recalls, “The shock of seeing Defender for the first time was one of those experiences that changed the gaming stakes for all of us."

Compared to other video games of the time, Defender of the Crown established a new level of quality. IBM had Kings Quest by Sierra On-Line, a decent but primitive adventure game. The Macintosh had games like Checkers or Backgammon, or board games like Risk. Defender of the Crown had richer graphics than any computer, console, or even arcade game could boast in 1986. It was a revelation.

That’s not to say that the game shined so brightly on every one of the numerous platforms to which it was ported. While the Amiga original is unquestionably the most visually impressive of the lot, there’s room for debate as to which version looks the worst. And, happily for iOS users, it’s the Amiga version that will soon be landing in the App Store. 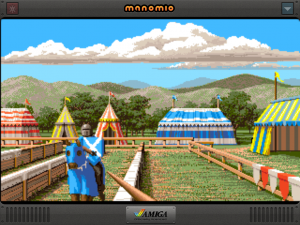 Being a faithfully emulated version of the original, Defender of the Crown for iOS brings with it the Amiga’s mouse-based controls, and Manomio has done a good job of making that work with the iPad’s touchscreen. In order to interact with items on the screen or aim the jousting lance, the screen becomes basically a large trackpad, with a pointer that can be dragged or clicked (tapped) to get things done. As a full-time user of Apple’s large Magic Trackpad, I very quickly got accustomed to the interaction, there. In a number of situations, a direct tap on this or that item on the screen would be preferable to dragging the pointer about, true, but I think it’s important to remember that this is an emulated title that is being made available to iOS gamers thanks to the iAmiga system. A ground-up rewrite of a classic from years past — and the likelihood of that occurring — is an entirely different proposition, from many angles. I think there’s much to be enjoyed about Defender of the Crown on iOS, just as it is.

Have a look at a bit of gameplay on the iPad 2 from the latest build of the game.

Stuart indicates that right now the game is feature complete and all that’s left is to finalize the in-game documentation. Defender of the Crown for iOS is a Universal application supporting the iPhone 3GS, 3rd gen iPod touch, iPad, or better. It should arrive in the App Store in about two weeks and we’ll be sure to let readers know when they can start to have fun storming the castles.