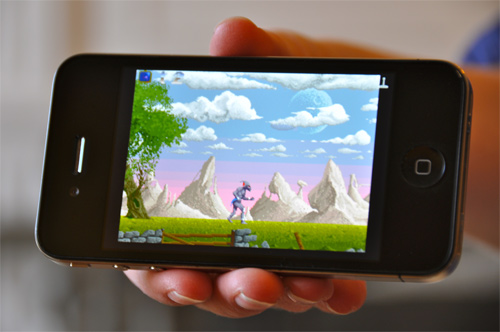 Indie development studio Manomio, whose proud motto is “in retro we trust," first grabbed our attention last summer when their Commodore 64 for iPhone [link] emulation app was rejected by Apple, putting some of the App Store’s boundaries under the spotlight. Happily, though, C64 eventually got the green light and has been warming the hearts of retro gaming enthusiasts for just over a year, now. It’s beautifully executed and is a favorite here at Touch Arcade. 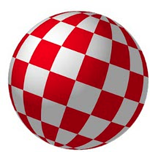 Early this year, Manomio let us know that they had a whole lot more retro heart warming in store and shared details of their upcoming Amiga emulation system, now known as iAmiga, that would allow them to license and release various classic Amiga titles to be faithfully rendered on your iPhone screen. On hearing this we were — readers and editors alike — thrilled at the prospect of enjoying some of the true gaming gems that sit among the vast library of Amiga releases. A short tech demo video was provided in short order, showing two games in play, that served as quite a teaser, making us very anxious to get our hands on the studio’s latest.

I’m happy to report that, yesterday, Manomio CTO Stuart Carnie was merciful enough to finally put an end to our suffering and provide us with an exclusive early build of the iAmiga system, packed with a bundle of sample games, to put through its paces. Yea, it’s dirty work, but somebody’s got to do it.

After spending some serious time with the iAmiga system, I can tell you that, for an early build, it is truly impressive. While it’s true that a few of the games that I tried glitched at some point, the vast majority ran perfectly and buttery smoothly on my iPhone 4. I’m talking about totally accurate sound, flawless graphics, glass smooth animation — just as if the games were being played on the standard config Amiga 500 that iAmiga emulates. Right now there are keyboard, mouse, and joystick input systems that can be activated with a tap, but (especially in the case of the keyboard) they are quick and dirty solutions that will be replaced with much more refined components before anything lands in the App Store, Stuart assures me. The overall portrait / landscape control mechanics, like those found in the studio’s C64, will be preserved, however.

As for what’s under the hood of the iAmiga system, Manomio has taken the UAE4All Amiga emulator and tied it to Stuart’s own ARM assembly optimized, emulated 68000 CPU core. In the name of performance, the core relies upon the ARM7x architecture and, as such, only iPhone 3GS / 3rd gen. iPod touch devices and up can play. iPad support is coming, as well.

The original plan was to take this emulator and wrap it around various licensed Amiga titles and release them as stand-alone games. That’s still part of the plan, but as certain App Store restrictions have loosened a bit of late, there will likely also be a sort of Amiga shell app released that that allows the stand-alone games to be played in a richer Amiga emulation environment that may offers things like OpenGL ES 2.0 shader effects to add scan-lines, CRT glare, and even TV-out and iPad play using a tethered iPhone as a controller. Just the kind of things that make die-hard retro nuts rather weak in the knees.

Stuart has given the okay for us to record and share sample gameplay footage of his emulation system, and so I’ve put together a fairly lengthy mix of 10 Amiga games that you just might remember.

The games shown in the video are the following, in order: Defender of the Crown, Battle Squadron, International Karate +, R-Type, R-Type II, Speedball, Stunt Car Racer, Shadow of the Beast, Virus, and Xenon 2: Megablast. It should be noted that this list does not represent the list of games that will necessarily be coming to the App Store through the iAmiga system — these are games simply used to test the system in its developmental state. (In fact, some of these I added from my own collection of Amiga disk images.)

As far as what we will be seeing in the way of iOS Amiga releases, Manomio has licensed various titles from Cinemaware, so Defender of the Crown, It Came from the Desert, Wings, and others are on the way. The studio is currently in licensing discussions with several other IP holders to secure additional titles for iOS release, including Factor 5 (Turrican I, II, III), The Bitmap Brothers (Xenon II: Megablast), Magnetic Fields (Supercars), Cope-Com (Battle Squadron), and Archer MacLean (IK+). Additionally, they are in talks with an unnamed major mobile publisher that’s very interested in putting Amiga classics in the hands of today’s gamers.

As you can see from the video, what we’re in for is a wave of excellent games that are retro, true, but not so retro that they lack mainstream appeal. (Yes, the Amiga was that advanced 25 years ago.) This is big news, not only for iOS gamers, but for mobile gaming in general. In my personal experience, Amiga emulation has been quite a bit more difficult to manage than other age-old platforms on proper Macs and PCs due to the complexity of the original hardware. The thought of having easy access to these games in a tap-and-go fashion — even standing in line at the bank — is just amazing. I call this some of the very biggest news in iOS gaming that we’ve ever covered and can’t wait until all of you out there get a chance to enjoy these great Amiga titles on your iOS devices, as well. 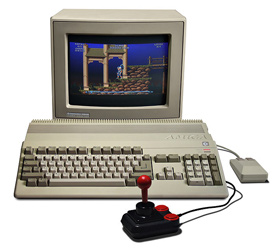 For readers unfamiliar with the Amiga, it is a 16-bit computer released by Commodore in 1985. A far more complex system than the C64, the Amiga featured a powerful central processor (the same found in the early Macintosh), various custom co-processors, and a multitasking operating system that, together, enabled audiovisual feats previously unseen in a consumer system at that point in time. While it did not see enormous popularity in the United States, it was wildly popular in Europe and is considered by many to be one of the very best game platforms ever created. InfoWorld called the Amiga the “third milestone" in computing after the Apple II and IBM PC.

We’ll be tracking Manomio’s iAmiga project closely and will pass along any further details that emerge, as we get them.

UPDATE: The developer has indicated that iAmiga will gain AGA support sometime after the first version is out the door. AGA (for Advanced Graphics Architecture) is the third generation Amiga chipset that brought a 24-bit color palette and more overall graphics horsepower to the platform. (Many of the most recent Amiga games are AGA-only.)