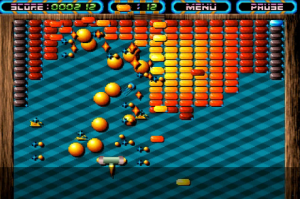 Krypton Egg was a highly regarded Arkanoid clone for the Amiga and Atari ST that was developed by HitSoft and released by Rainbird in 1989.  DotEmu has just released an iPhone port of this classic [link] through the App Store (published by Chillingo).

When Krypton Egg first hit the shelves back in 1989, French magazine PC Loisirs described it as the best breakout game in the world.  As has been the trend of late, this Amiga classic translates well to the iPhone.  We’ve played a lot of Arkanoid clones for the iPhone, and Krypton Egg is certainly one of the best.  While the game has a retro feel–even beyond the typical Arkanoid clone–it should appeal to fans of the genre who aren’t particularly looking for a jolt of dreamy-eyed nostalgia, as well.

Have a look at the developer’s demonstration video.

DotEmu is also responsible for the iPhone port of the Amiga classic Nicky Boom.  See our interview with DotEmu CEO Xavier Liard to get a better feel for this retro-reviving development house.