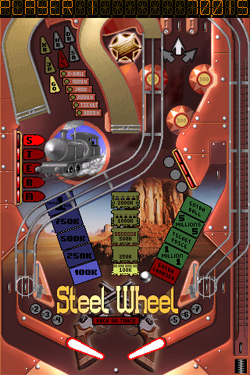 Pinball Dreams was an extremely well received game when it debuted on the Amiga back in 1992.  It took full advantage of the Amiga’s (then) powerful graphics hardware and offered a realism and playability rarely–if ever–seen before in a computer-based pinball game.  A British reviewer of the Amiga version well describes the significance of the title on the platform.

Pinball Dreams was an enormous success; not only did it top the Amiga best-sellers lists, it’s also responsible for selling a sizeable number of Amigas at the same time. But what was it that made the game so different from other pinball games? Attention to detail: Pinball Dreams emulated the real pinball feeling like no game before it. The ball’s response is so much more realistic, the layout of the tables is carefully thought out and tied to the theme of the table…So careful were Digital Illusions to catch the real pinball feeling that the beautifully drawn tables (especially considering the colour limitation) even depict the screws that might conceivably be holding the table together. Add to this the great sound effects, the ability to give the table a quick shove (but not too much or you might affect the tilt sensors) and you’ve got a real classic. Unlike any previous game, you could really believe that there might be real pinball tables just like the four in Pinball Dreams.

Pinball Dreaming: Pinball Dreams [App Store] for the iPhone, like the original, features four themed tables, all of which are available to play from the start:

The tables are laid out exactly like those in the original but feature mildly improved graphics (thanks to the iPhone’s much greater color palette).  The graphics are detailed 2D bitmaps shaded to suggest 3D.  The developer provided us further details in this area:

Music and sounds naturally are all original. The only thing we’ve done is that we “remastered" the table graphics with more colors – you can play in the all-original graphics by entering the setup menu and selecting them from there. 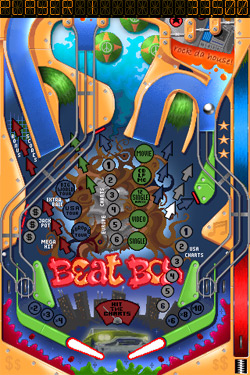 Pinball Dreams features touchscreen controls; a tap to the left or right side of the screen activates the paddles and a tap to a newly emerged ball in the well fires it onto the table.  A quick jerk of the iPhone gives the virtual table a nudge–but be careful, nudge to hard and it’s TILT city.  Rotating the device changes the orientation of gameplay.

I am a huge fan of the original and its various sequels and, years ago, spent days playing them on various Amigas.  I can say with authority that the iPhone version is actually more enjoyable than the Amiga original.  All of the nice elements of the original are here, but in a far more convenient (pocketable) package.  What’s more, while the iPhone and Amiga feature the same horizontal pixel resolution, the iPhone’s display is twice as tall (pixel-wise) as the Amiga’s, and so only slight vertical panning of the table is needed to track the ball on the iPhone (where the vertical panning in the Amiga version was extreme [video]).

All that said, it’s important to remember that this is a classic title from 1992.  While it provides great gameplay, it’s visuals and table theatrics cannot compare to more modern titles such as ZEN’s Pinball: Rollercoaster for iPhone and Pinball FX for X360 or Crave’s Pinball Hall of Fame for PSP.  And although it does have a retro feel to it, Pinball Dreams does not feel like “an old game."  It offers fast, smooth pinball action that’s hard to put down.

Pinball Dreams has already seen a rather positive reception from our forum members, many of whom are now replaying an old favorite on their iPhones and iPod touches.