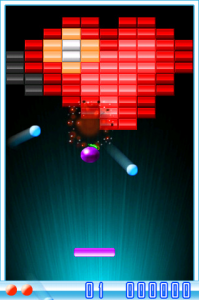 In 1986, Taito brought Atari’s classic Breakout to the next level with Arkanoid. They built upon the basic formula of destroying bricks with your paddle and ball by adding updated graphics, advanced levels, and a multitude of power up capsules that would fall at random from destroyed bricks.

Each power up capsule could provide you with advanced capabilities such as lasers, wider-paddle, multiple balls and more. Of course, if you get too distracted trying to catch the falling capsules, you could easily miss the ball and lose your turn.

The App Store has reintroduced this classic game to the iPhone in the form of six updated Breakout and Arkanoid clones. One trick in finding a good Arkanoid-style game is finding the right balance of difficulty level that both keeps the gamer interested and also avoids making the game too tedious. While Breakout was a milestone game when it was introduced in 1976, modern day gamers will quickly tire of the monotony of breaking each brick one by one.

The six current games include:

A comprehensive gameplay video is embedded below. 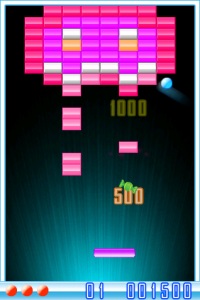 Ikanoid [$2.99, App Store] provides the best game playing experience amongst the games I tried. With its excellent sound effects and responsiveness, it really provides a solid arcade feeling. The availability of power up capsules are abundant, but aren’t so powerful that they necessarily detract from the basic gameplay. The biggest shortcoming of this title at present is the lack of any other menu options. The game’s only menu option is to start a ‘New Game’. There is currenly no high score. If you do start a new game, you start back on level one. (Paused games, of course, can be resumed)

This is a real shame because it currently limits the replay-ability of the game significantly without any way to track your progress.

However, we contacted Storybird about this deficiency and have been told that an impending update will address these issues and more. Specifically, a Hall of Fame and net rankings, 3 difficulty levels and a few more power-ups are planned for release as soon as Friday. 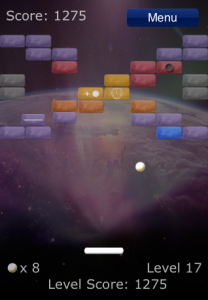 I’m going to discuss these games together since they share a remarkable resemblance. Both provide a more basic breakout game with some power up capabilities. Unlike Arkanoid’s use of falling power capsules, however, they’ve embedded power-ups within specific bricks; when destroyed, the power-up is instantly enabled.

Of the two games, Super Pong [$2.99, App Store] is superior, but only by a small margin. Break [Free, App Store] feels less polished and has a few more gameplay issues. Sound effects are very soft and unsatisfying. There are occasional collision detection issues as well as framerate problems. Still, it’s hard to argue with free, so the game may be worth a try.

The gameplay of both titles is more paced than Arkanoid. The use of in-brick power-ups slows game play down and removes a lot of the randomness of traditional Arkanoid play. 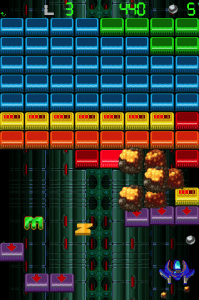 There’s a disturbing trend amongst iPhone game developers who chose not to provide any gameplay documentation. Ultranium 4 [$3.99, App Store] is one of these offenders. For most Arkanoid games, this may not be a problem, but one aspect of Ultranium’s gameplay left me scratching my head. At some points in the game, the ball curves off its normal linear pattern (see video). After a period of confusion, I decided that some bricks tend to attract the ball.

Ultranium tries to merge Akranoid with Galaga by replacing your paddle with a spaceship. The game introduces some non-traditional bricks that will explode on contact, as well as the “gravity" bricks I described above. In the end, I found gameplay to be uninteresting. Levels suffered from being too tedious (breaking each brick one by one) or too easy (with overpowered power-ups).

While we reviewed Binary Square’s Space Out [$4.99, App Store] before, it seems appropriate to mention it again in this roundup. In context of this roundup, I found Space Out’s gameplay to be somewhat lacking. While retro-gamers may find some interest in the nostalgic aspect of the game, the black and white graphics and hybrid gameplay were not particularly engaging to me. 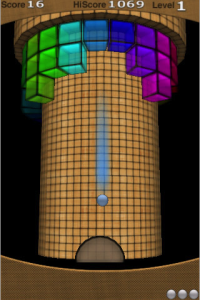 It may be unfair to include BreakTouch 3D [$2.99, App Store] into this roundup of primarily Arkanoid clones, as BreakTouch 3D is actually a beautiful Breakout clone. The gameplay offers no power up capsules, but does introduce the classic Breakout game on a rotating cylinder.

The 3D effects and graphics are impressive and do introduce an interesting twist to the traditional Breakout gameplay. However, gameplay itself tended to be quite tedious as bricks need to be removed one at a time. Perhaps some Breakout fans might enjoy this, but I think that most would grow tired of the game quickly.

Gameplay demonstrations of all the games with the exception of Space Out are included in this video. Space Out gameplay can be seen in our previous review.

For Arkanoid and arcade fans, Ikanoid [App Store] provides the best overall gameplay, and knowing that high scores are a single update away makes it easy to recommend this title.

Meanwhile, gamers looking for a more paced rhythm to their Breakout games can look at Break [App Store] and Super Pong [App Store].