Mobile gaming is no stranger to ports of console games, but what surprises me is when developers go the extra mile and bring additional features to the mobile ports of existing games. These range from interface upgrades for modern touchscreens to new features like autosave and more. Feral Interactive is a great example of a company that goes the extra mile for mobile versions of PC and console games with the likes of Tropico.

Over the last few years, it has been interesting seeing more Japanese developers bring some of their older games to mobile through basic ports and even proper conversions for current mobile devices. Square Enix is no stranger to premium prices for older games, and the company has even gotten better about ports bringing some games day and date with the console and PC releases like SaGa Scarlet Grace: Ambitions that is a must play on iOS.

I discovered Nippon Ichi Software (NIS) through the Disgaea releases on PS Vita and have been a fan ever since. The Disgaea series is easily my favourite tactical RPG series alongside modern Fire Emblem. Disgaea games aren’t your usual grid-based tactical experiences because they push everything to the extreme. I’ve seen the words “statistical playground" thrown around for NIS’ Disgaea series often and that is very accurate. Over the top animations and skills, loads of post game content, more numbers than most Excel sheets, and loads of humor that will be hit or miss for you is basically what Disgaea is all about.

The original Disgaea debuted in North America as Disgaea: Hour of Darkness on PS2. This was then ported to PSP as Disgaea: Afternoon of Darkness that added a new Etna Mode that was like a side story along with some quality of life features including widescreen gameplay for the PSP. The PSP port of this served the basis for Disgaea PC that is currently available on PC platforms through Steam. The PC version included higher resolution support. That PC version from 2016 served as a base for Disgaea 1 Complete that was released on PS4 and Nintendo Switch in 2018. Disgaea 1 Complete on those two consoles has a redone interface, higher quality character models, higher quality textures, and basically felt like a game made to let fans who got into the series through Disgaea 5 experience the origins of the series.

This game is not a port of the PS2 original or a “decade old game" like some people are saying. Disgaea 1 Complete ($32.99) on iOS and Android uses the PS4 and Nintendo Switch port from 2018 (that still is priced at $49.99 digitally) as a base and adds a few more very useful features in addition to having support for touch controls and traditional controllers. When I played Disgaea 1 Complete on both consoles, I was pretty disappointed that the Switch version had no touch controls despite the Switch having a nice touchscreen. Thankfully the iOS version rectifies this and I’ve been playing Disgaea 1 Complete on iPhone 11, iPad Air 2, and iPhone 7 Plus since it launched on iOS and have come away impressed for the most part. 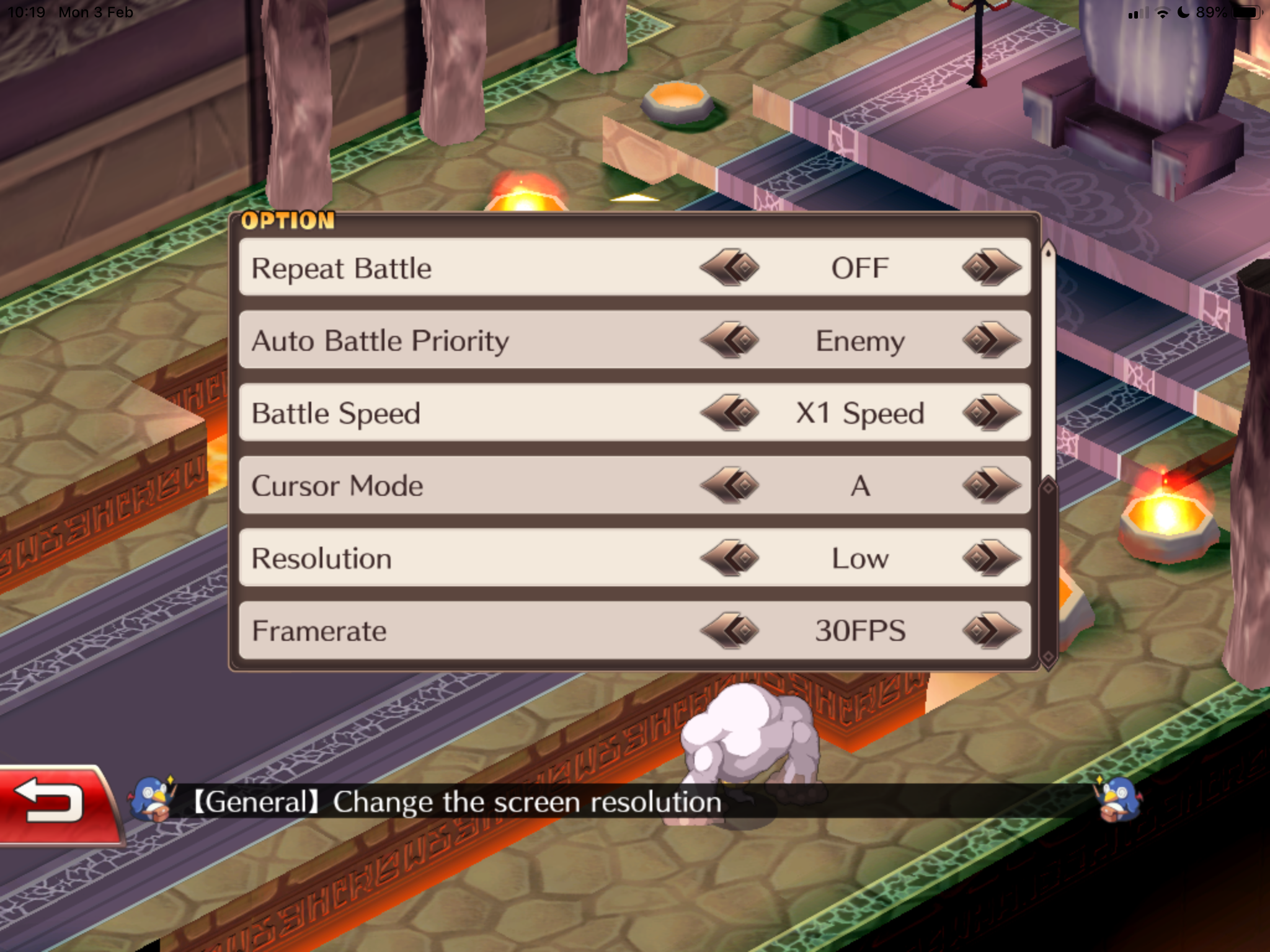 If you’ve never played a Disgaea game before or have never played Disgaea 1 before, you play as Laharl who wakes up after a two year slumber thanks to Etna, a castle vassal, who tells Laharl that his father was killed two years ago. The Netherworld is now in turmoil and Laharl sets out to fix everything with the help of Etna and some prinnies initially. A prinny is basically the NIS mascot that keeps saying “dood" while talking. The story is pretty lighthearted and over the top when it comes to dialogue. It serves as a nice breather for the focussed moments you will have during the 40 plus hours of main story here. If you played Final Fantasy Tactics, imagine that but with everything turned not to 11 but 9999 because that’s exactly what Disgaea is going for.

Disgaea 1 Complete on iOS and Android brings everything modern Disgaea fans like into a single package that modernizes the experience with new features exclusive to the mobile version of Disgaea 1. You still get excellent tactical RPG combat and a boatload of optional content, but the new features will ensure the people who spend hundreds of hours in a game like this find it hard to go back to older releases. The auto battle option is something I didn’t think I wanted in Disgaea but something I hope every future game includes. You can even blast through the game with up to 8x the speed in battles.

The Cheat Shop is a great addition to the series that I got to experience with Disgaea 4 on PS Vita. Having it on Disgaea 5 was great and I’m glad that NIS brought it to Disgaea 1 Complete on mobile. This lets you tweak around the experience gain, enemy strength, and more to customize your own experience. A lot of players use this for power leveling and it basically is a dream come true for those who try to reach level caps or get overpowered. The Cheat Shop alongside battle speed and auto battle easily make this the best version of Disgaea 1 on any system.

When it comes to controls, you can play Disgaea 1 Complete with only touch controls, button controls on a controller (I used both an MFi one and an Xbox One controller while playing), or a combination of both. It is worth noting that controller support overall isn’t great and I found no way to change the button assignments. Some menus also didn’t scroll with a controller. Touch controls are great for the most part. You will just need to get used to the hub movement because while you can tap to move, the character tries to go straight to where you tapped and not around any obstacles like staircases in a corner which is annoying. You need to drag to move which ends up working a lot better.

When it comes to visuals, Disgaea 1 Complete looks mostly great and scales well on different aspect ratios. The actual gameplay fully supports the iPhone X screen size and plays well on iPad Air 2 with the 4:3 aspect ratio as well. The cutscenes and story segments sometimes have pre-rendered backgrounds cropped depending on the device though. You can choose between three resolution settings and two frame rate options.

On iPhone 11, I could play at the high setting for resolution and 60fps without issues. The iPad Air 2 struggled to maintain 60fps though at full resolution. Despite already having a great portable version on Switch, the iOS port on iPhone 11 makes it hard to want to ever bother with Disgaea 1 on another system given how good the port is visually and when it comes to performance. The load times on iPhone 11 are instant just like the PS4 compared to Nintendo Switch where it takes a while initially to load up the game before you get into your save file. 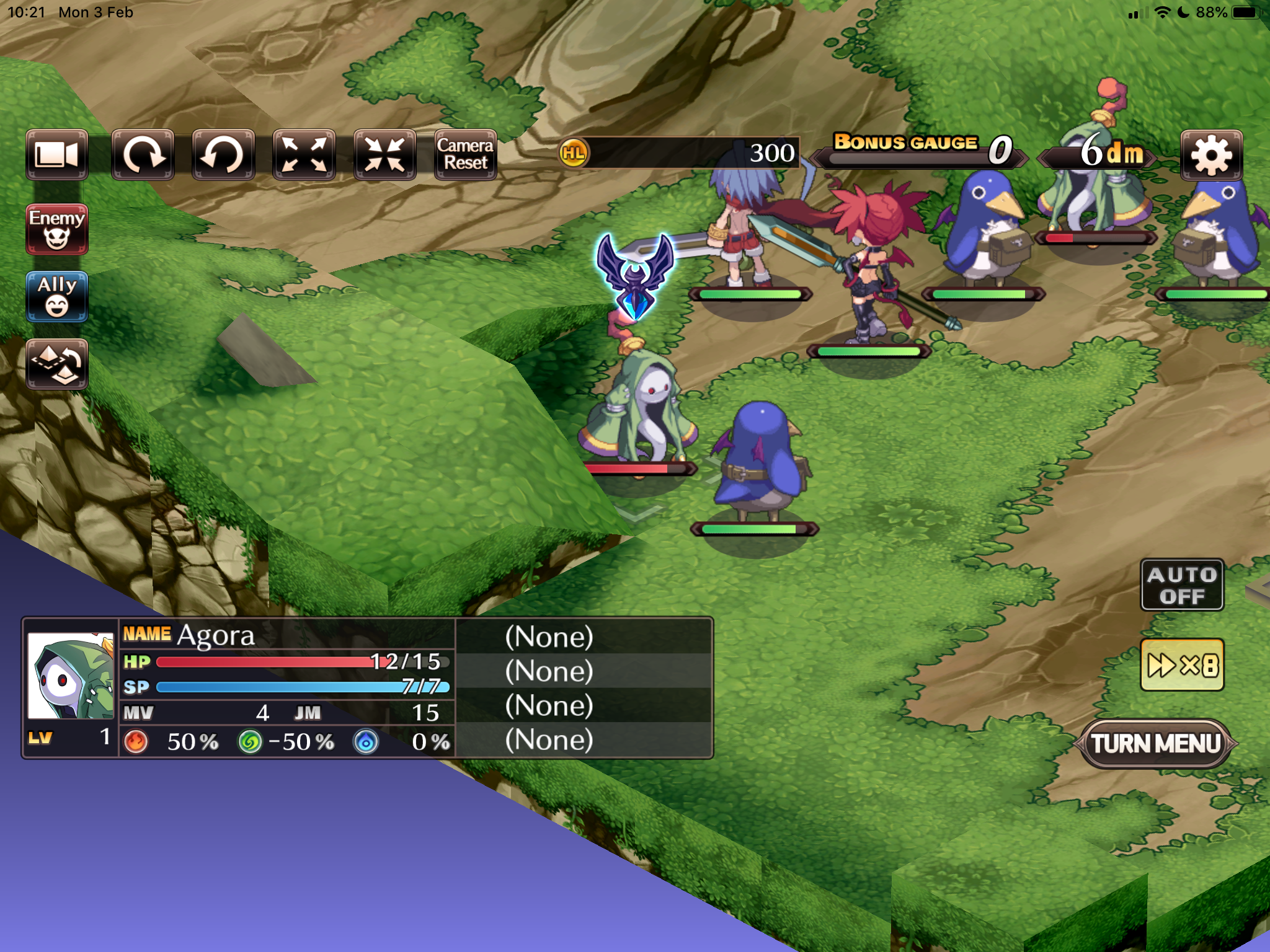 One annoying issue I ran into on iPhone 11 is the fact that the swipe bar or home indicator is visible at all times. This wouldn’t be a problem if it dimmed but it is visible at all times and sometimes covers a part of the interface or comes very close to covering some text. The only major patch since launch so far has been to fix a cloud save issue, but I’m hoping swipe bar gets resolved in a future patch too.

On the audio side of things, both English and Japanese voiceovers are supported for event scenes and Tenpei Sato’s great soundtrack has aged like fine wine. There isn’t a ton of voice acting here but having dual audio support is always welcome. This game uses NIS America’s localization from the PS4 and Nintendo Switch versions.

In addition to the controller support not being amazing, the cloud save implementation leaves a lot to be desired. It allows for cross platform saves but if you just own iOS devices, it is needlessly complex. You need to remember a login ID and a password to be able to access your saves which are stored on NIS’ server with a validity of a year seemingly. You can also upload and download only one save at a time.

While I am a big fan of the franchise, Disgaea 1 Complete at $49.99 on PS4 and Nintendo Switch was already not great value when Disgaea 5 was available for less in many places and is a much better game. Disgaea 1 Complete at $32.99 on iOS is worth it if you’ve never played a Disgaea game before and want a superb tactical RPG experience on the go. While it is much higher than the usual Final Fantasy port price, this release makes me think of Civilization VI on iOS and how that cost exactly the same on iOS as PC at the time. Disgaea 1 Complete costs less than other consoles and has more features that will be game changers for many people. If you’ve already played Disgaea 1 on PS4 or Nintendo Switch however, the new features on mobile are not worth the asking price for a double or triple dip. If Disgaea 1 Complete on iOS had the exact same features as the PS4 and Nintendo Switch release, it wouldn’t really be worth the asking price with the aforementioned issues.

Disgaea 1 Complete on mobile with the new features is the best version of the game on any platform now. While I still prefer Disgaea 5 Complete overall, it is good to see NIS continue to refine the original game with every new platform offering better ways to experience the origins of one of my favourite tactical RPG series ever. While I can’t vouch for the post launch support of this release when a new iOS update hits, in its current state (with the cloud save issue fixed), Disgaea 1 Complete on iOS is an easy recommendation for tactical RPG fans.