Square Enix’s SaGa games, and indeed most of the works of their creator Akitoshi Kawazu, are like the blue cheese of the JRPG genre. To many players, the inscrutable mechanics, emphasis on random elements, and complete lack of interest in the norms of the genre make the SaGa games complete turn-offs. And yet for a certain type of player, there’s really nothing else quite like them. There’s a special zing to them that can excite even the most exhausted of taste buds. Luckily for Kawazu and his fans, there have typically been enough of those players to keep the series going, albeit by a hair at points.

Indeed, things seemed awfully grim after the one-two punch of Unlimited SaGa and Romancing SaGa: Minstrel Song on the PlayStation. The former pulled off the unlikely trick of turning off even a lot of SaGa fans with its awkward design, while the latter was a humble late-gen remake that seemed to suffer from both poor timing and the ill reputation of the prior release. Kawazu was called in to help guide the troubled Final Fantasy XII to the finish line, and SaGa went dark for several years. Its ideas lived on through games like The Last Remnant ($19.99) and The Legend of Legacy, but SaGa itself seemed like it had finally burned through all of its chances. 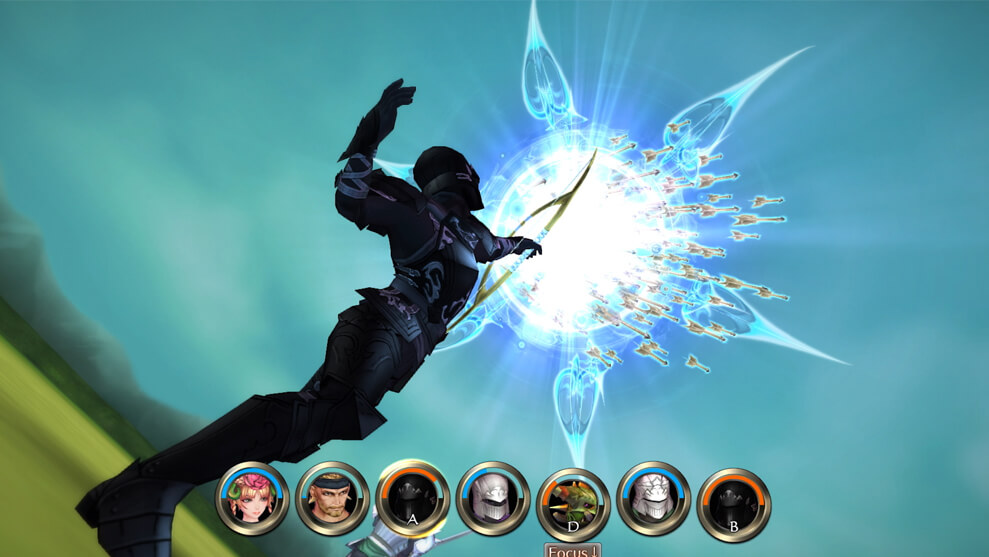 That said, the series had been quite popular in its time, and Square isn’t the sort of company to leave nostalgia untapped if it can help it. When the 25th anniversary of the first game’s release rolled around, the publisher announced a slate of projects to celebrate the occasion. There was a browser game called Imperial SaGa, a remake of Romancing SaGa 2 ($17.99) for mobile phones, and the crown jewel of the announcement: a brand-new SaGa game for the PlayStation Vita called SaGa: Scarlet Grace. Of these projects, only the remake of Romancing SaGa 2 earned a Western release, but across its various ports that game apparently did well enough to keep things rolling.

One important goal was to get that Japan-only Vita SaGa game out to a wider audience. An enhanced version of the game, now titled SaGa Scarlet Grace: Ambitions ($29.99), was brought to a number of other platforms in Japan in 2018. That game was localized and brought out worldwide on several platforms a few weeks ago. This is the first release of a brand new SaGa game in English in 16 years, which is one of the reasons why I’m giving a history lesson here. The other reason is that, well, it’s-a me, Shaun. Anyway, 16 years is a huge chunk of time in the games industry. There was no Xbox 360 or Wii or even Nintendo DS when Unlimited SaGa released. Master Chief had only had a single adventure, and Kratos was still a twinkle in Sony’s eye. Did this stubborn series actually learn anything in that time, or are we back to the same old stinky cheese? 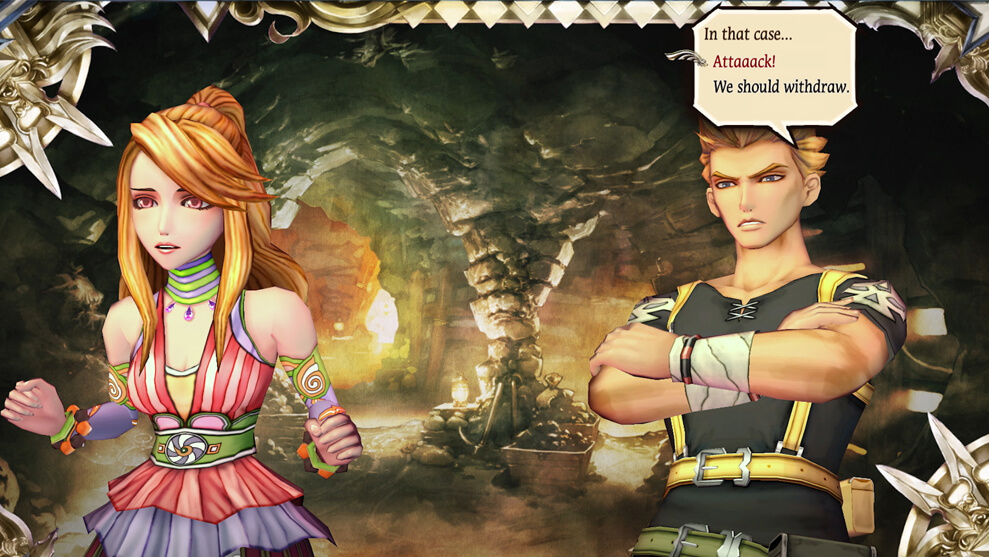 Ha, I love those leading questions. Actually, I hate them. Here’s the answer: SaGa has learned a lot. SaGa has learned almost everything. I’m utterly shocked at the quality of SaGa Scarlet Grace: Ambitions. This is what is likely a very budget-strapped game from a highly eclectic creator, and its Western release felt practically invisible for how much noise Square Enix made about it. Perhaps more importantly, this is a series known for… I don’t want to say “thoughtless design", because that is absolutely not the case, but certainly design that paid little heed to what was going on around it. I need to emphasize that because SaGa Scarlet Grace: Ambitions is perhaps the most thoughtful, tightly-designed RPG I’ve played since The World Ends With You ($17.99).

I suspect very strongly that this game was originally planned as a premium mobile release before the bottom fell out of the market, because it’s very economical in how it’s put together. There are no dungeons to explore here. Towns are basically single-screens with menus. Everything not only controls just fine with touch controls, but feels like it was made for such input methods. The game can be perfectly sliced into shorter play sessions or played in lengthy runs. There’s very little fat hanging on the bones of this 20-hour (per character) game, and that turns out to be a very good thing indeed. And I know, some may worry at what is missing. Are you here for epic battles? Got ’em. Interesting party building? Got that too. Stories? Wow, do we have stories here. Side-quests? Replay value? Strong writing? Check, check, check. 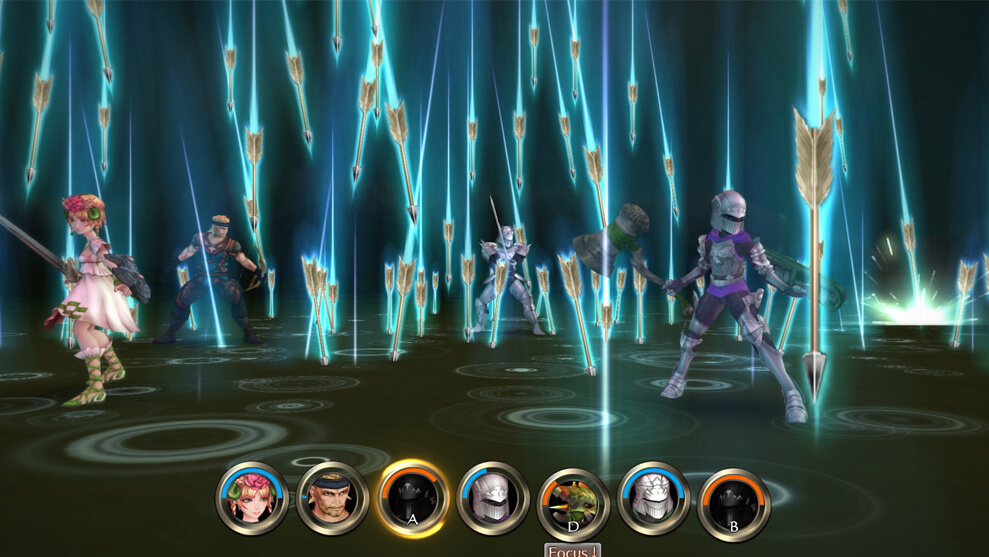 While I like every little bit of SaGa Scarlet Grace, it’s easy to pick out the best part: the battle system. This is one of my favorite RPG battle systems ever. You are given all of the information you need to make informed plans. You can see the turn order. You can see which moves the enemies are going to make. You can see how the moves you choose will affect those things. How many actions you can take per turn is governed by how many action points you have, with each turn adding another action point to the pool. Battles start off simple but escalate the longer they go on, meaning that skirmishes with goons are short and simple while boss battles turn into drag-out wars.

The turn order is more than just a helpful guide to who goes when, however. You (and your enemies) can manipulate the turn order by using moves that counter or interrupt attacks, and that’s something you’ll want to do because of one of the most enjoyable new aspects of SaGa Scarlet Grace‘s battles: United Attacks. If the removal of a participant in the battle results in two characters on the same side moving together, a United Attack will be triggered. This causes the characters who moved closer together on the timeline to launch an assault on another enemy. If that attack takes out a participant and causes two more characters to move together? Oh boy. You can see where this is going. On top of that, the characters that joined in will be able to act with fewer action points in the next turn, allowing you to use more powerful moves at a cheaper cost. Don’t be cocky, though, as the enemy can do this to you. You can even do it to yourself if you’re careless. 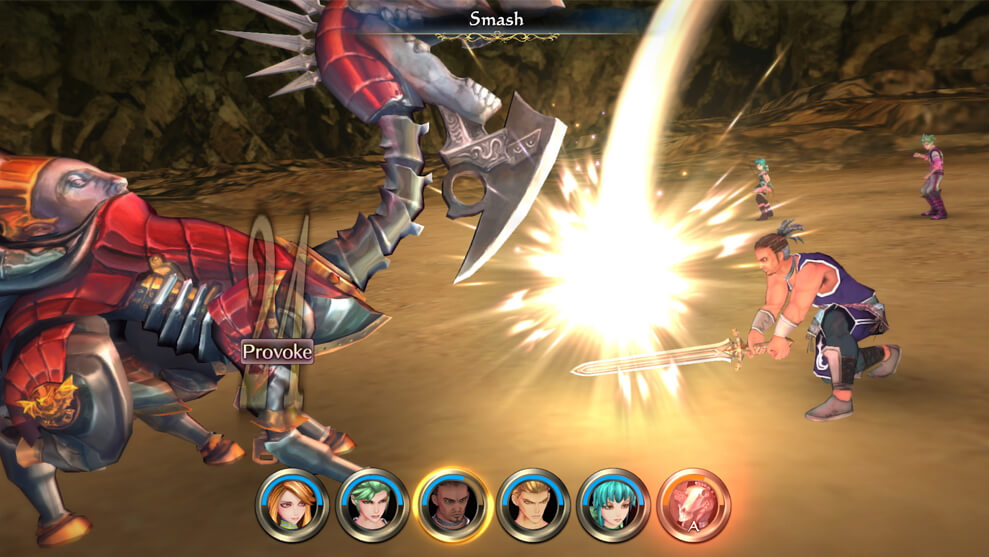 There are a few random elements to keep things spicy, but for the most part the battles in this game are a matter of knowing what you can do to counter what the enemy is going to do. Sometimes it’s a lot, sometimes it’s not enough. But you’ll rarely be blindsided if you pay attention to what you’re doing. I haven’t even mentioned battle formations, an element seen in many prior SaGa games but a lot easier to understand the value of here. I could not get enough of these battles. In some RPGs, I get tired of the combat system and try to avoid unnecessary fights. Here? I was picking every fight I could, simply because I was having so much fun shutting down my opponents.

Working hand-in-hand with the battle system is the familiar SaGa growth system. New moves have a random chance of coming out while using other moves, teaching that move to the character so that you can use it at your leisure in the future. Stat growth is a little less chaotic than usual here, mainly relying on random upgrades for hit point gains. Equipment is less frequently bought than upgraded using materials collected from fallen enemies, and new magic is learned by assigning points earned after using a mage in any battle. All of this adds up to a very flexible system that opens up nicely the deeper into the adventure you go. As far as party building goes, the amount of choice you have depends on which of the four playable characters you end up with. Some give you plenty of options, while others are stricter. 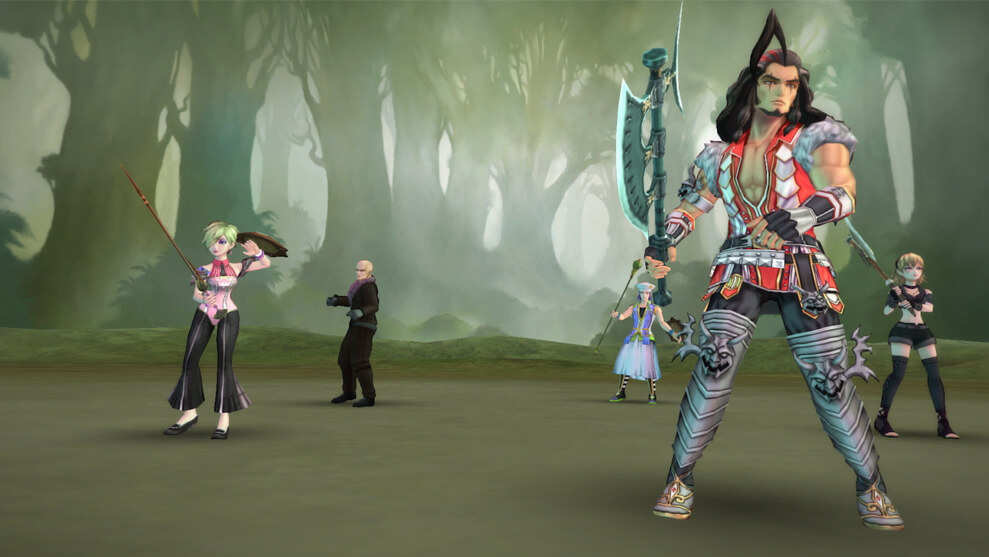 Ah, I could gush about the mechanics all day. What an impressively designed video game this is. But RPGs are more than mechanics, and some of you are probably worried about that whole “lack of dungeon exploration" thing I mentioned. Indeed, you’ll be spending most of your time traveling around a pop-up storybook-like world map. Your characters will venture into dungeons, but their exploration in such dungeons will be described in text, calling on you to make the occasional decision or fight some battles. In lieu of the usual dungeon exploration, the world map itself is packed full of points of interest, secrets to uncover, and places off the beaten path to see. You can follow the main path if you like, but you will certainly be rewarded in every sense of the word if you choose to wander around.

It honestly reminds me quite a bit of an adapted gamebook, along the lines of things like inkle’s wonderful take on Sorcery! ($4.99) or Nomad’s Fighting Fantasy Legends ($2.99). It’s a bit more complex than those, but it conveys that same sense that you’re sitting across the table from a proper Dungeon Master. Some of the side-quests are silly, while others are deadly serious. Some require you to solve a few puzzles to uncover, while others can pretty much be stumbled over. What you choose to do, or not to do, will have very real effects both mechanically and narratively on the rest of the game, whether for good or for ill.

With how much SaGa Scarlet Grace relies on text to convey situations, solid writing and a quality localization are perhaps more important than usual here. While I wouldn’t say that the various plotlines in the game are going to win any awards, the localization certainly should. There’s a lot going on here, and with lots of different characters, regions, and tones in play, keeping it all sounding the way it should must have been a task of Herculean proportions. But they did it, and I’m happy to say that the text was able to draw all kinds of emotions from me as I went through each character’s story. One character’s plotline is practically a parody and I can’t even begin to imagine how hard that must have been to handle.

Really, I could go on and on about SaGa Scarlet Grace: Ambitions. The more I think about it, the more I want to excitedly blather on about it. It feels like an RPG made for people who love RPGs, a confident and well-paced stab at the genre from a team of people who understand perfectly well how each part would affect the others. Now, look. I do love the SaGa games, but it’s always been a conflicted kind of love where I feel cautious about recommending them to others. They’re just so weird, right? SaGa Scarlet Grace: Ambitions is the first game in the series that I feel like I can safely recommend to RPG fans in general. It has all of the things that make SaGa games so appealing and very little of the opacity that normally turns people away. It’s absolutely brilliant and even though I’ve finished it four times already, I still have to fight a near-constant itch to fire up a fresh save and go at it again.