Now and again, we all grow a little nostalgic thinking of the games we used to play. Be they Diablo, Paper Mario, or, for me, Warcraft III, it’s fun to go back and play them again. Of course, we wouldn’t want to play them exclusively (modern games have made some improvements, after all!) but it is refreshing to note the highlights and draw parallels to the good in modern gaming, as well as the bad.

Enter Return 2 Games, a series planning to pay homage to seven retro titles with seven modern interpretations. The first of these, Book of Demons ($9.99), channels the visual style of Paper Mario into a hack & slash dungeon crawler on rails. While it isn’t exactly Diablo, it is quite a bit of fun, and no slouch when it comes to replayability.

While it clearly uses Diablo as an inspiration, Book of Demons doesn’t actually play very much like Diablo at all. Sure, there are hordes of enemies to slaughter, tons of different equipment to collect, a handful of different classes, and a range of difficulties, but actual gameplay is pretty different. Levels, for example, are far less open. Players are restricted to following a track with enemies approaching from all sides, and they must occasionally backtrack or hurry forward to avoid abilities or ranged attacks.

Movement isn’t all that’s different, though. All characters are “ranged" characters, in the sense that they can attack just about anything on the screen, no matter where it is in relation to the character. The only condition to this is that the creature must be “visible", or within the character’s sight range. This applies not only to creatures, but also to the various props and fountains: If it’s lit up, you can hit it; otherwise, you’ll have to move closer. 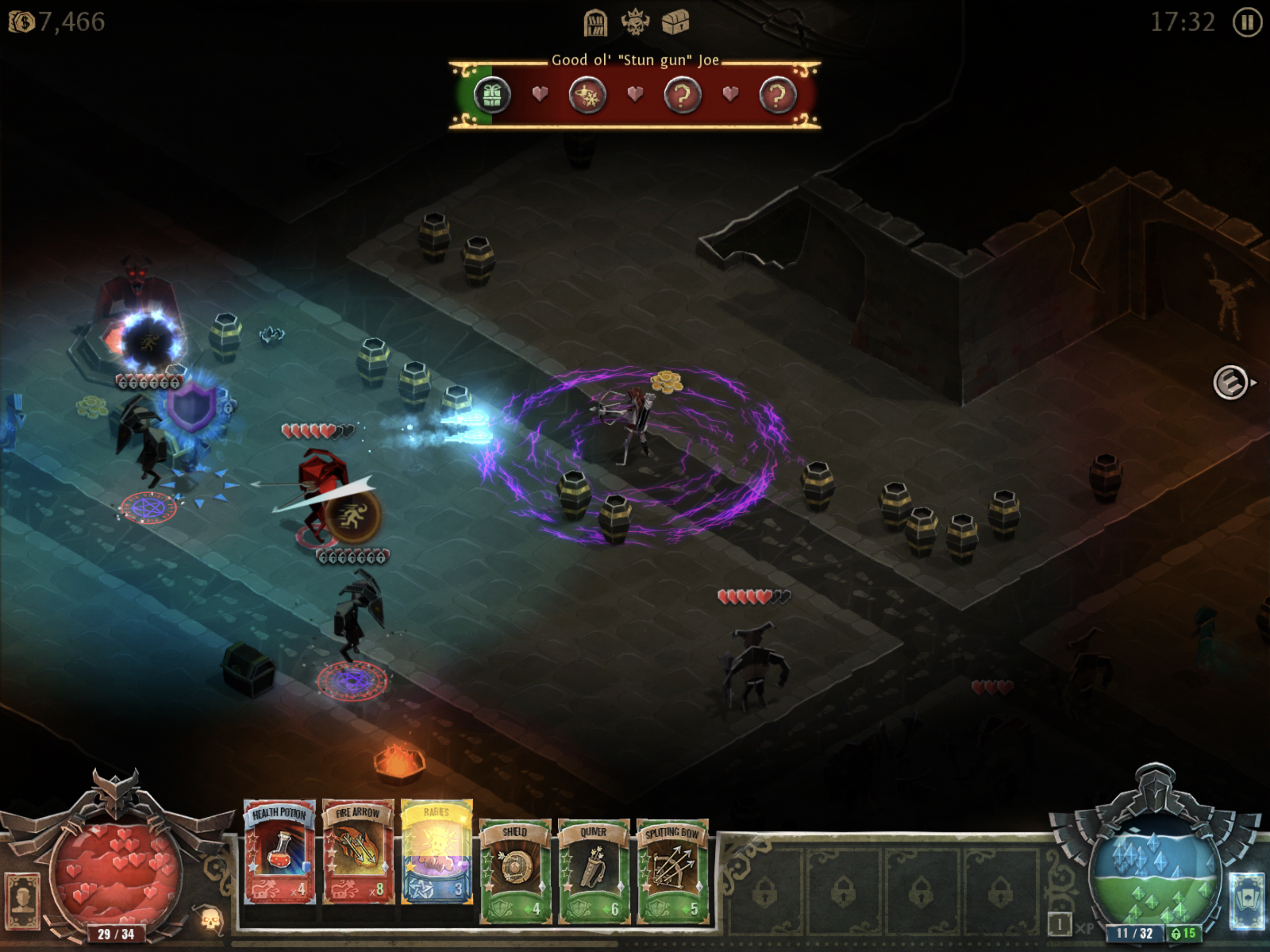 In terms of enemies, almost every single one has something special about it. The only exception, as far as I have been able to tell, are the basic skeletons which are, no matter how you flavour them, just basic skeletons. Beyond them, however, there are ghosts (bothersome creatures that always spawn with icy hearts), goat-men (who have randomised health pools), spiders (spawn more spiders on death), zombies (poisonous cloud on death), and more. In addition to the basic types, elites will occasionally spawn. These bigger, meaner, and generally badder baddies have special, uninterruptible, abilities that trigger upon reaching certain health thresholds. While most of these abilities aren’t actually unique to elite monsters, the combination of them is.

Players begin the game as the Warrior, a burly fighter who specialises in getting up close and personal with his foes. While all classes specialise in one area or another, the cards available to the Warrior are such that he, unlike the Rogue or Mage, doesn’t have to choose between becoming a nigh indestructible tank or an unstoppable killing machine; instead, he can be both. On the other hand, while he is incredibly durable and a menace to skeletons and ghosts everywhere, he can’t reach the same heights as the Rogue or the Mage. So while he is an excellent introductory class, most players will probably find the other two more interesting. 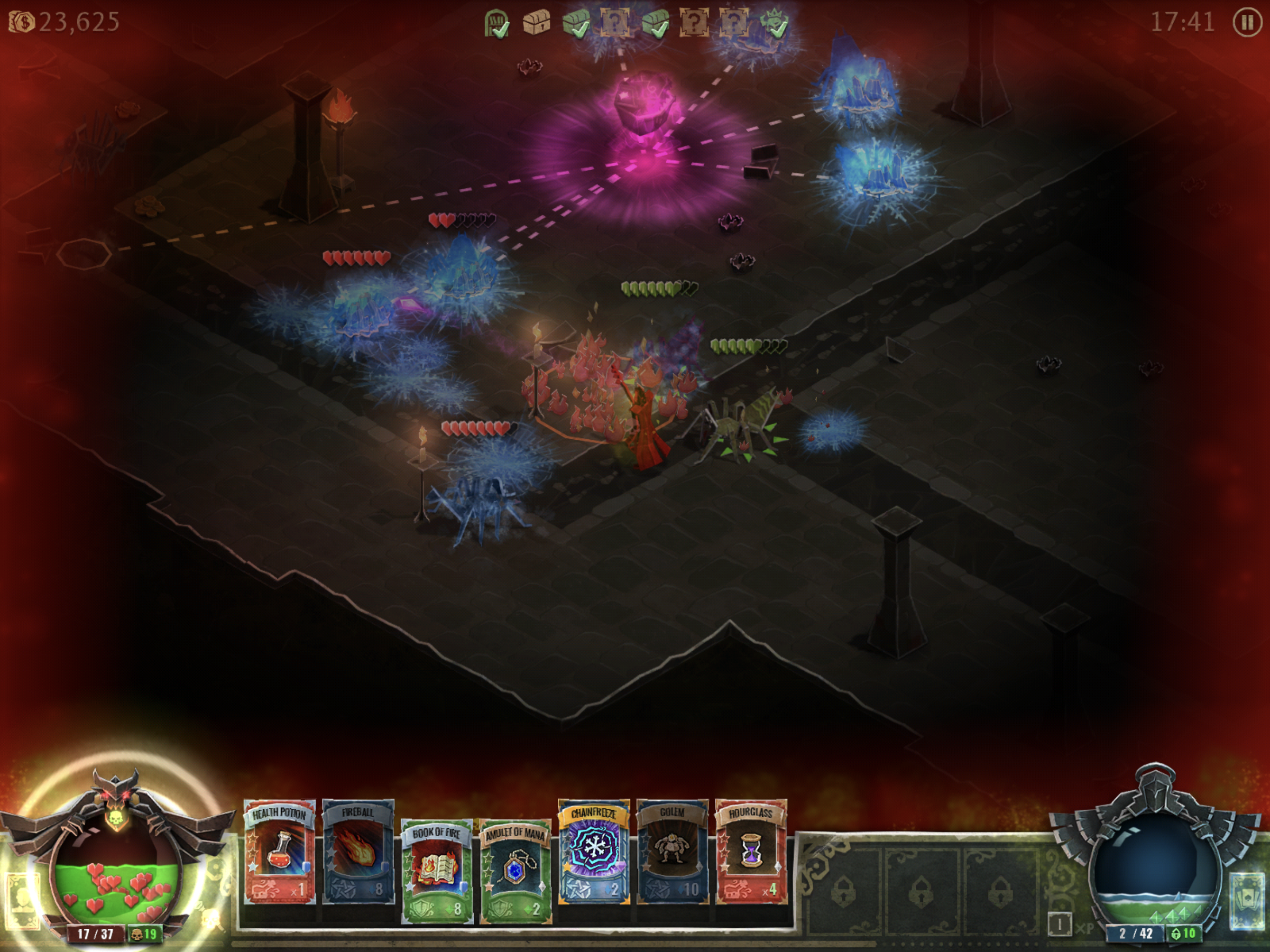 The Rogue, on the other hand, prefers to remain just out of touch, showering the onrushing mob with arrows elemental and otherwise. Should they get too close, a hearty dose of terror or a savage slash of claws are a quick fix. Unlike the Warrior, however, the Rogue’s attacks can miss, as both obstacles and enemies will block her arrows, potentially costing valuable resources.

Last (but certainly not least), the Mage brings a compendium of spells both practical and flashy. From fireballs and ice bolts to teleportation and magical shielding, the Mage is a versatile class well equipped for clearing dungeons. Despite his strengths, however, he is especially dependent on his mana pool, and without it all that versatility and power is as dust in the wind.

Visually, Book of Demons is similar to Paper Mario, but not so similar as to be directly drawing inspiration from it. Rather, it is closer to a pop-up book in style, with landscapes folding out from the entryway, enemies and NPCs alike springing up from the ground, and character cutouts that look like, well, paper cutouts. It’s kind of charming, actually, in a rather dark and campy way. 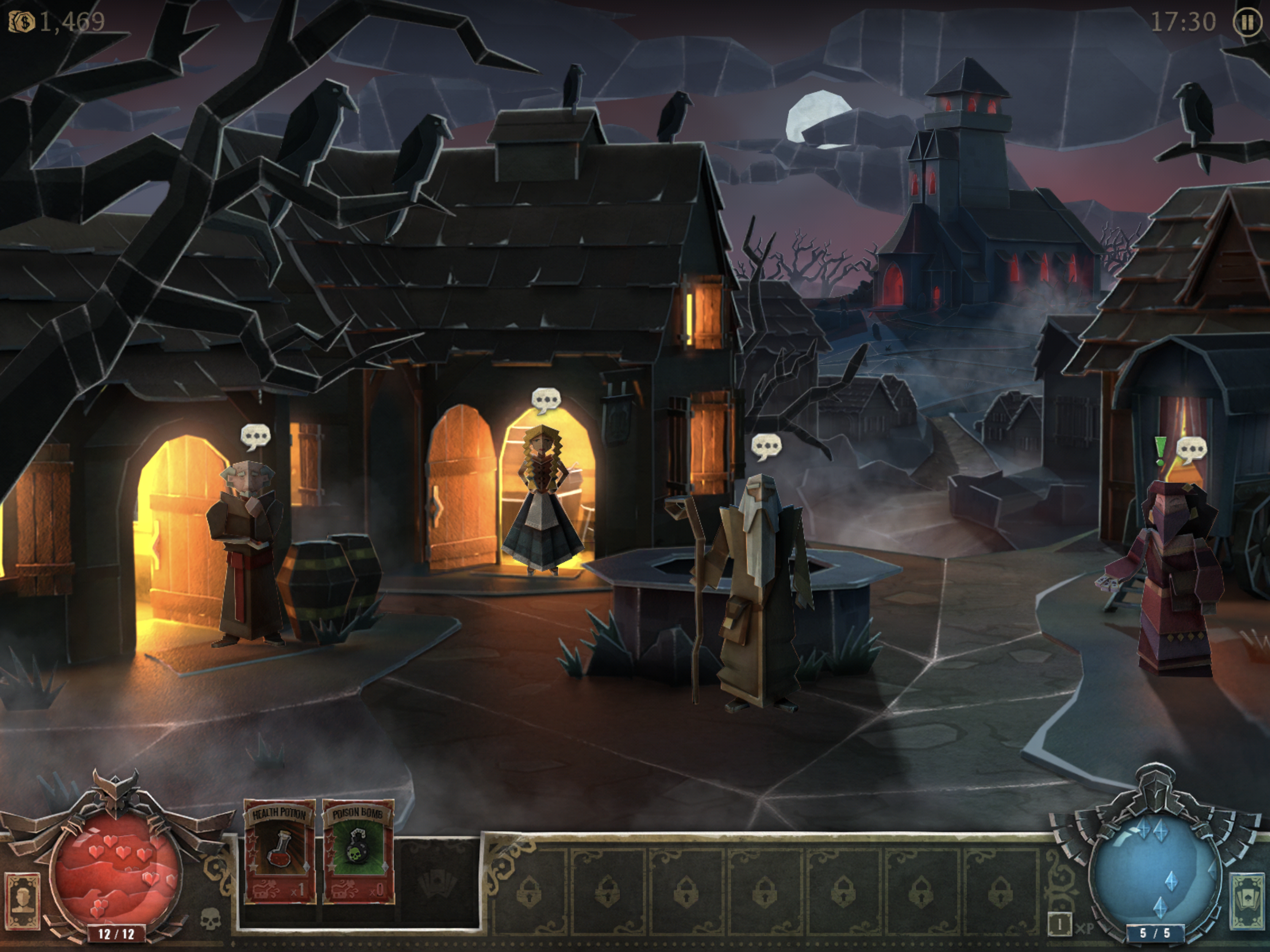 The writing reinforces that feeling with depressing musings on the past from the Priest, snippy feuding between the Sage and the Fortune Teller, and endless optimism from the Barmaid. There’s more besides, of course (character comments on the dungeon, boss introductions & deaths, and more besides), but those are less avoidable. The interactions with town NPCs stays, for the most part, in the background and is wholly unnecessary to complete the game, but ignoring it also ignores a lot of what makes Book of Demons appealing: The atmosphere.

See, it is all intended to enhance the immediate, low-level impressions given by the art, by the enemies, and by the gameplay itself. This isn’t just a pop-out book with gameplay reminiscent of Diablo, it’s a Diablo parody. Where Diablo is dark, serious, and hardcore, Book of Demons is funny, light-hearted, and… mid-core. It’s a delicate balance, but executed quite well.

On the whole, Book of Demons is an easy recommendation, especially for iPad. With the Flexiscope, a feature that allows you to pick the amount of time you want to play and a dungeon based on that play time will be created for you, it is capable of delivering both a short romp and a longer dive. While it doesn’t have the near infinite replayability of Diablo, that doesn’t mean it isn’t replayable at all. It is, and it’s just as good the second, third, or even fourth time through as it is on the first.