This is the way One Night in Karazhan ends, not with a whimper, but with The Spire. Yes, we have reached the fourth and final wing of Hearthstone‘s (Free) latest adventure, and as always, the time is bittersweet. Yes, the adventure is coming to an end, but we are getting some fun cards that, hopefully, will change up the meta a bit and get the game feeling fresh again. It’s been a fun four weeks, and this final wing is no exception. This week we got the Shade of Aran, Netherspite, and Free Medivh! encounters, and there were some fun surprises along the way and some very promising cards, too. So, let’s start, shall we?

And by the way, If you haven’t played the rest of the Adventure yet, check out our guides for the Prologue, Wing 1, and Wing 2. 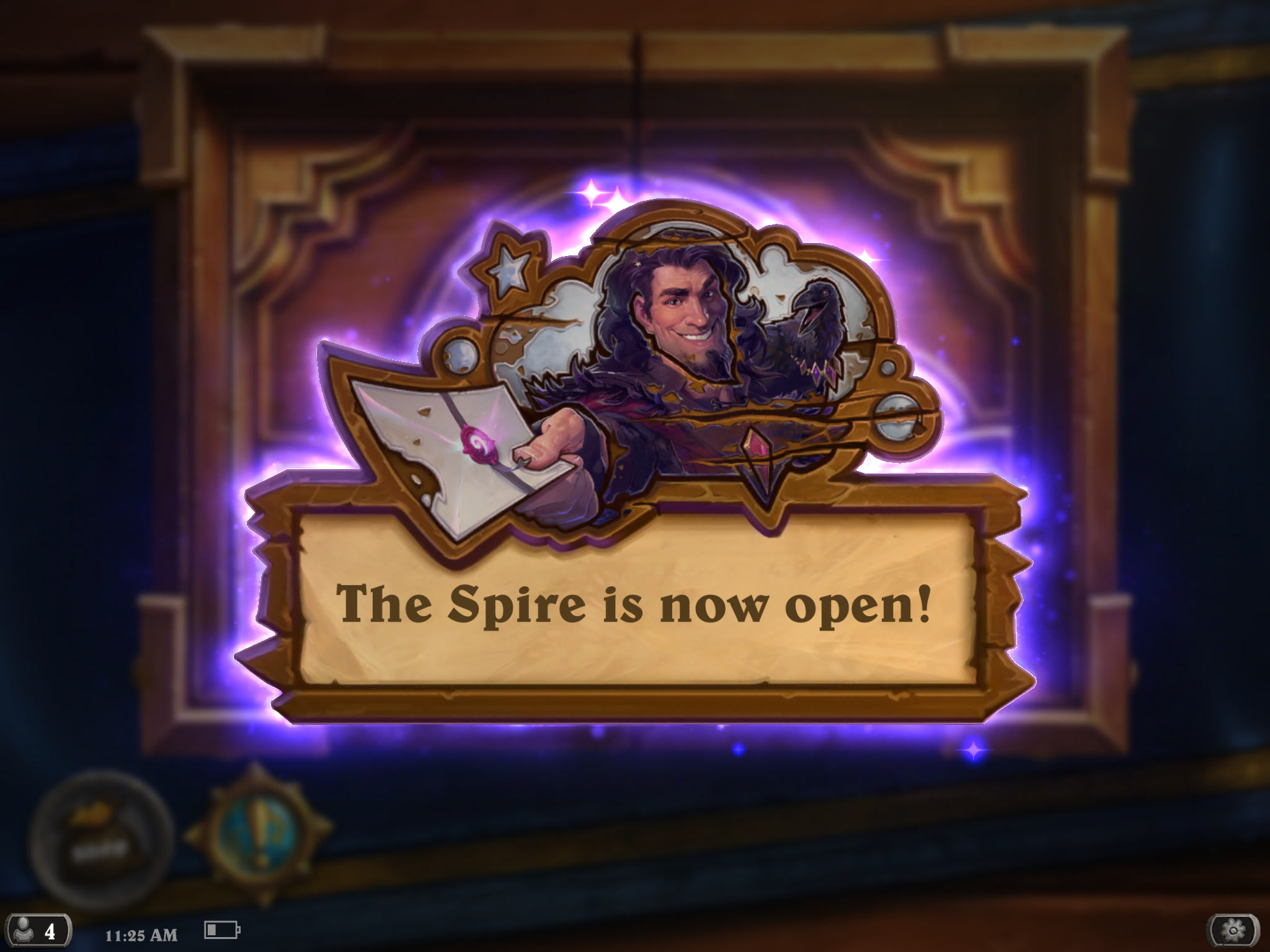 ‘Shade of Aran’ Normal and Heroic Guide and Decklist

This first boss’ Hero Power is Ley Lines (Passive) Both Players have Spell Damage +3. So, as you suspect, any spells you bring along will be much more powerful than usual. Your opponent plays almost exclusively spells along with plenty of Secrets and minions that take advantage of Secrets (like Medivh’s Valet and Avian Watcher). Because of the extra spell power, you’ll have a bit of a hard time setting up a strong board and so will he. He plays plenty of Mage spells (Frostbolts, Arcane Explosions, and the like), and the Secrets will be a bit of a pain to handle, especially if you aren’t getting the cards you need in your hand.

However, he quickly runs out of cards to play because his deck lacks decent card draw and the spells are cheap, so he plays quite a few at a time. You can defeat the Normal Shade of Aran with ease. Decks with Divine Shield help neutralize most of his AOE spells no matter how strong they are, and since you’ll be facing Secrets for sure, you could even finally make use of that Eater of Secrets card. Just make sure you bring spells along to take advantage of the Spell Power boost, and if you have a slow deck, bring some Health spells because he can do quite the damage with his spells. Overall, though, the Normal won’t give you much trouble. 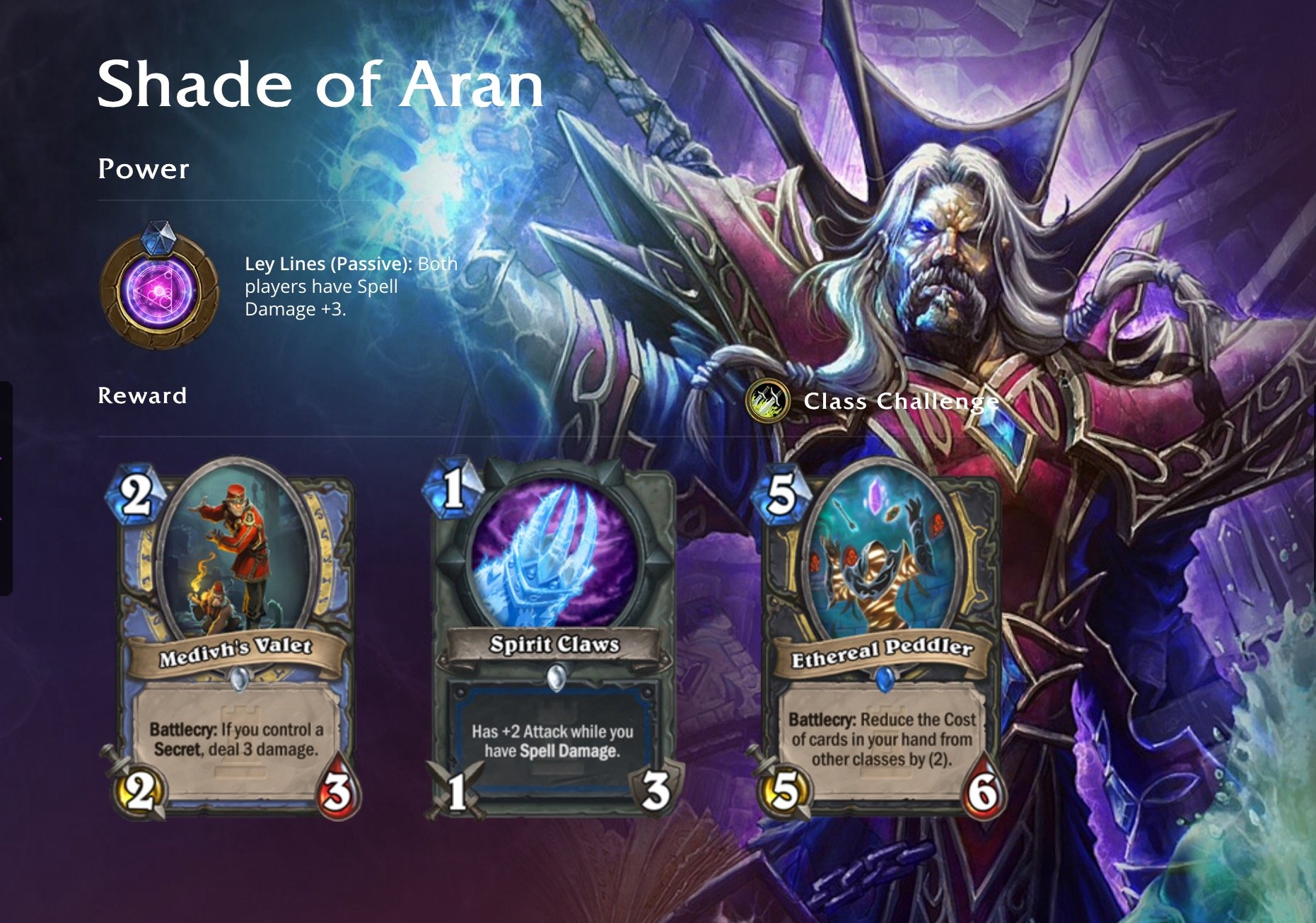 The Heroic Boss gives +5 Spell Damage to both players and has 15 Armor on top of that. The easiest way to go about taking him out is bringing a Mage deck with plenty of spells as well as Counterspell, Kezan Mystic, and Loatheb to mess with his spell casting. One good such deck is Kibler’s Mage deck from over at HearthHead: 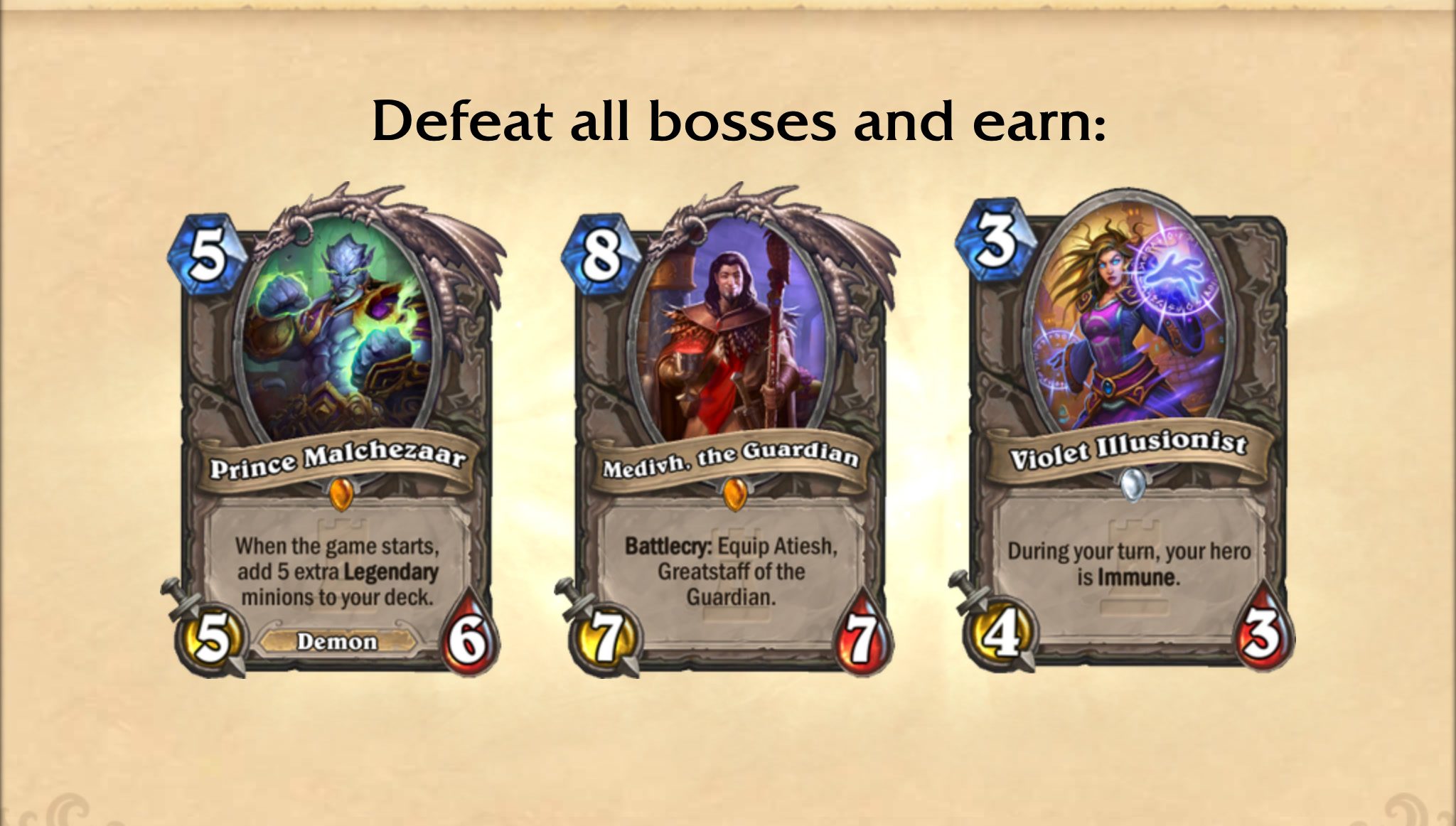 The Hero Power in this one is Nether Rage: Give your hero +3 Attack this turn, but the fun part of this encounter is the two portals; the Red Portal on the left gives Windfury to the minion closest to it, and the Blue Portal to the right makes the minion to its right take only one damage at a time. So, positioning matters greatly. If you have high health minions or minions with ongoing effects, play them to the right; if you have high attack ones, play them to the left. At the same time, make sure you block the Blue Portal from reaching the Boss so that your Windfury minion does more than one damage at a time.

Netherspite has some spells that either deal damage to minions or sap them back into your hand. And expect to be hit for 3 (or 6 if you don’t block the Red Portal) because of his hero power. In Normal, Netherspite is quite easy to take out. Just keep enough minions on the board to block both portals (Shaman’s Hero power is a cheap and easy way to block the Blue Portal) while having big minions or Charge minions (I had a lovely Flamewreathed Faceless) on the left side to deal plenty of damage. You could also throw Taunt minions to the right of the board because unless he can remove them with spells, he can only deal one damage at a time. And you could always block the Blue Portal with Spell Power minions and go face with spells. 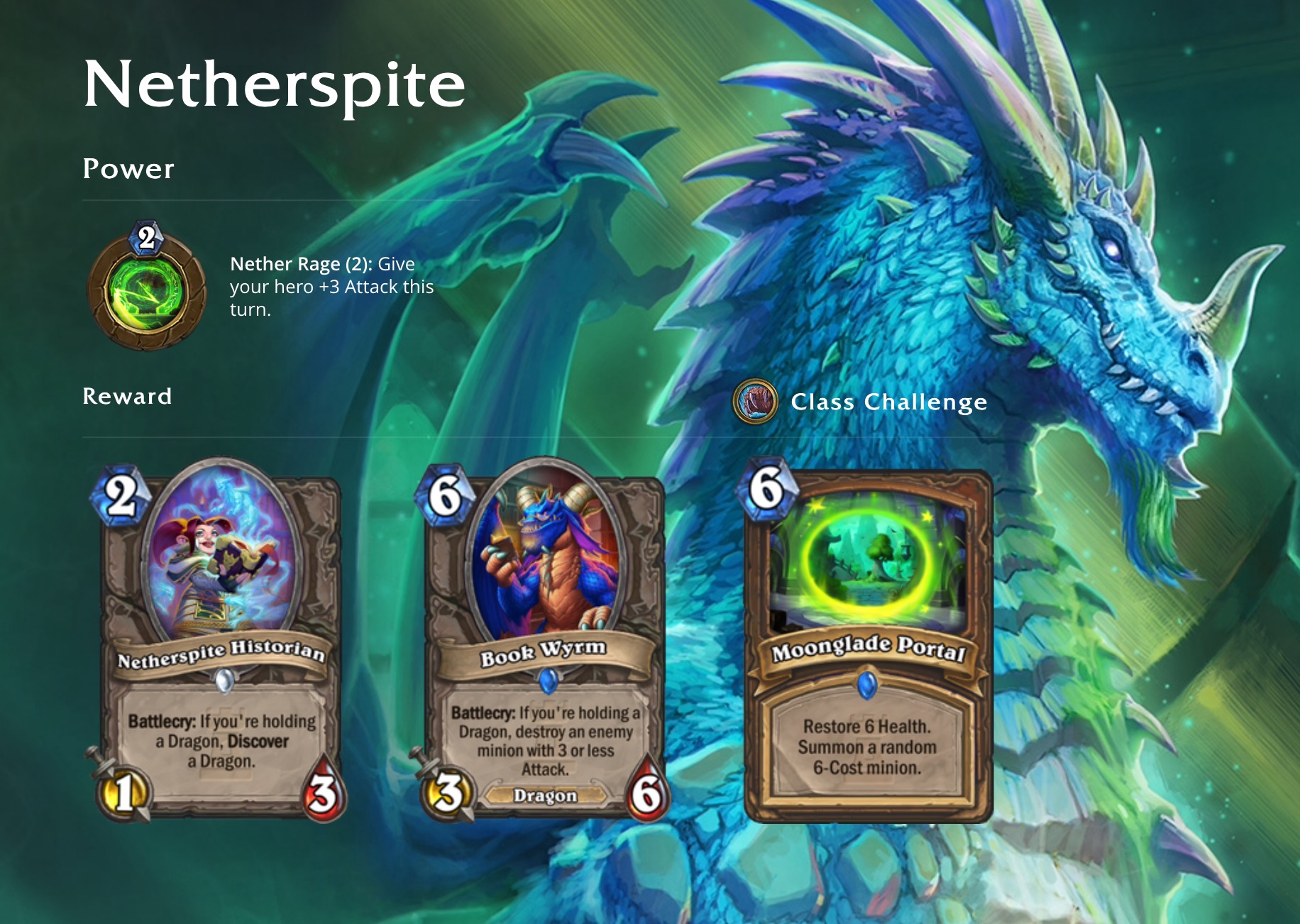 The Heroic Netherspite has a +8 Attack Hero Power for 1 mana, which makes Taunt minions even more important. If you’re having a hard time, you could use a deck like Kibler’s Warrior deck that brings plenty of Taunts along to protect your face while including Charge minions to take advantage of the Windfury on the left side of the deck.

In this encounter, you first get the Warrior Nazra Wildaxe by “accident." Her Hero Power is The Horde: Summon a 3/2 Orc. Expect to be seeing plenty of those Orcs. She’ll play cards like Bash, Power of The Horde, Arcanite Reaper, Mortal Strike, and plenty of Orcs. Overall, she’s pretty easy to take out because she only has 15 health. Once you take her out, all her minions disappear, so no need to bother clearing the board if going face will defeat her.

Once you take her out, though, Prince Malchezaar takes her place. His Hero Power is summon a 6/6 Abyssal, and he’ll play Twisting Nether to clear the board the moment he pops into the game. You get Atiesh at the beginning of this phase of the encounter. So, whenever you play a spell, you get a random minion of the same cost and lose one durability. Malchezaar has some “nice" Warlock cards like Imp Gang Boss, Blood Imp, Demonfire, Voidwalker, Succubus, Siphon Soul, and some other interesting cards like Gorehowl, Shadow Word: Pain, Demonic Presence (Draw 2 cards gain 10 Armor), Shadow Bolt Volley (Deal 4 damage to 3 random enemies), and others.

Malchezaar is probably one of the toughest bosses of Karazhan both because of his strong removal and because of the constant rain of Abyssals, but he’s still not that hard on Normal. Since you’ll be facing weapons in both parts of the encounter, bring Acidic Swamp Ooze to keep that in check. You’ll also need plenty of Taunt to keep those minions away from you.Try to clear out the Orc side of things without using too many spells so you can take advantage of Altiesh, and also try to take him out without having too many minions on the board because of that Twisting Nether.

I had fun playing a Reno C’thun Druid because I used the first part of the encounter to load up my C’Thun. By the time Malchezaar joined us, it was easy to ignore his board, take out any Taunts, and then use C’Thun to finish him off. And if I got into trouble, Reno got me back into the game. 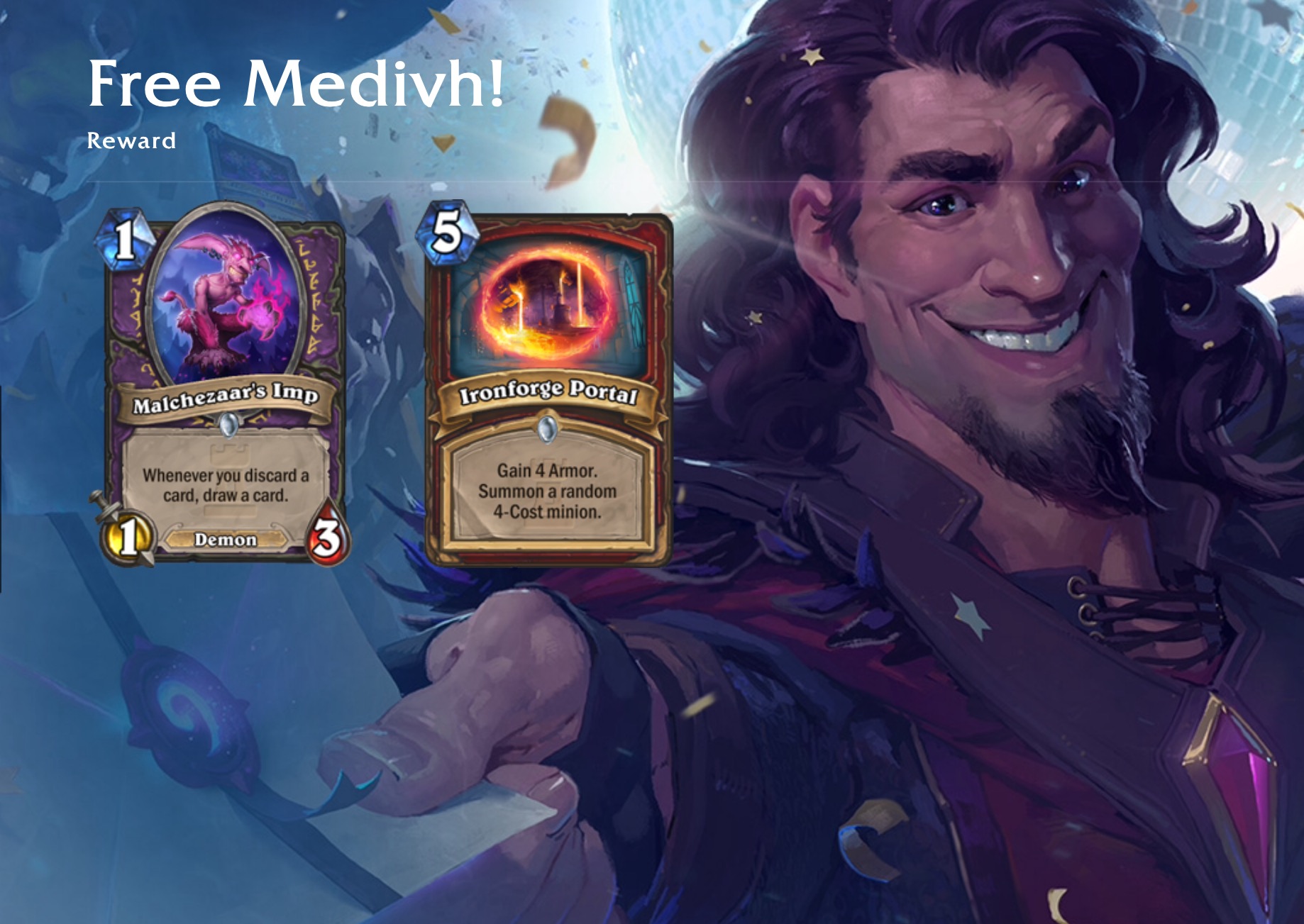 In Heroic, Wildaxe summons 3/3 Orcs with Charge, which makes clearing the board even more important. She also uses weapons more than in Normal. Malchezaar has 30 Health 30 Armor and summons two 6/6 minions at a time. If you’re having a hard time taking out the Heroic Free Medivh! and also want to use some of the new cards, use Trump’s Mage deck that you can find on HearthHead: