If you like to see weird animals, then you’ve come to the right place. Hearthstone‘s (Free) One Night in Karazhan Adventure has opened its third Wing, The Menagerie, and in the process released a collection of rare – and deadly – creatures. Apparently, normally all these creatures are kept in check by Medivh’s reliable Curator, but he’s having an off night and, well, all the creatures are out to play. You have to step into the Curator’s shoes and recapture the creatures before they eat too many guests. This is the setup behind Karazhan‘s Wing 3, and it’s a perfect way to bring out mostrous Bosses like Nightbane, Terestian Illhoof, and the Curator himself, as well as rewarding you with cards like Zoobot, Cat Trick, Menagerie Warden and Menagerie Magician, and even the Curator himself. So, let’s start with the first boss and help you take him out in Normal and Heroic.

And by the way, If you haven’t played the rest of the Adventure yet, check out our guides for the Prologue, Wing 1, and Wing 2. 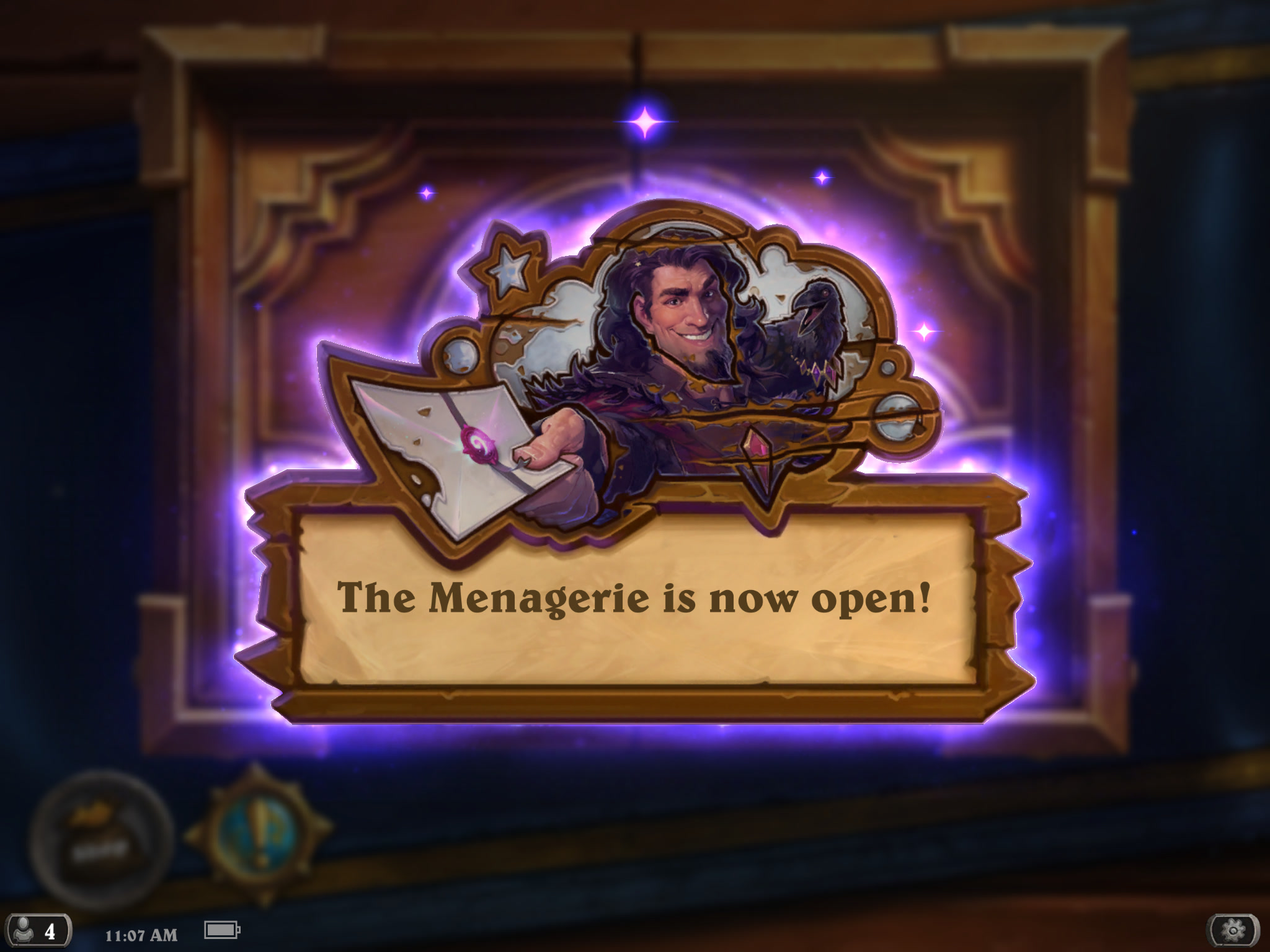 The Curator Normal and Heroic Guide and Decklist

The Curator has 30 health and a passive hero power called Gallery Protection that gives the Hero Taunt. He sounds like a cyborg, which makes him quite entertaining to hear. He has cards like Stampeding Beast, which summons a random beast, Demons Loose, which summons a random Demon, Murloc Escaping that, you guessed it, summons a random murloc, Haywire Mech, which brings a random Mech to the board, Raid Leader, Master Swordsmith, and spells like Lightning Storm, Arcane Blast, Lightning Bolt, which he uses to keep your board clear. Because of his Taunt Hero Power, you cannot take out minions with your minions. So, you’ll have to bring plenty of spells to keep his board in check while you take him out with your minions, spells, and weapons.

For Normal, a standard Aggro Shaman does the trick just fine since you can use spells like Lightning Storm to keep the board in check while using Doomhammer with Rockbiter Weapon among other things to go face. In general, bring a deck with some taunt minions if you want to protect yourself from those minions, spells to clear the board, and you should be fine.

Heroic Curator has 40 health and 15 armor and a few different cards, but other than that not much is different in the encounter. It’s actually one of the easiest heroic I’ve ever played. I beat him with a very basic Totem Shaman deck, but if you need something that will easily do the job and also use plenty of Karazhan cards, check out Noxious’ Heroic Hunter that you can also find here: 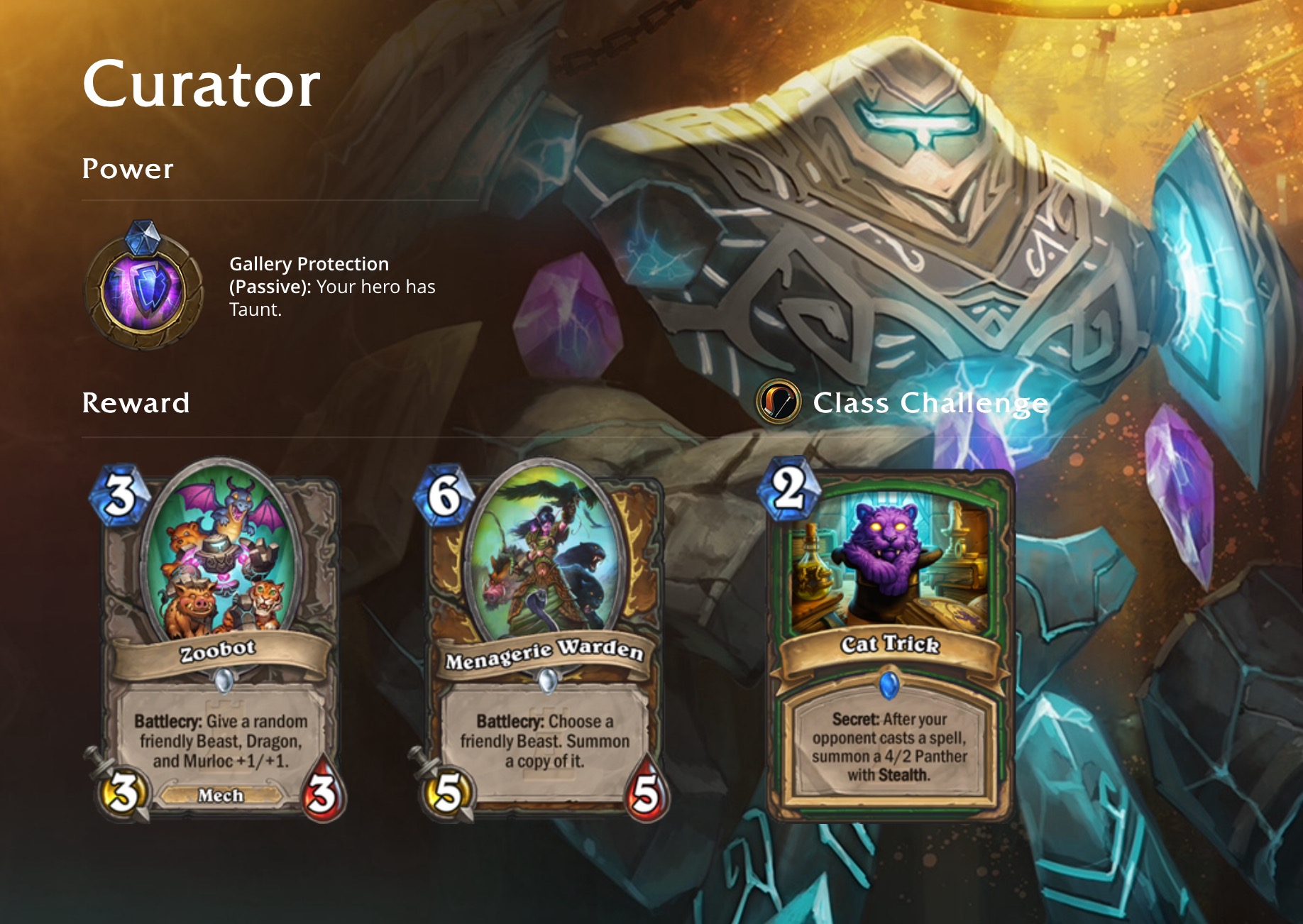 Nightbane, the second Boss of the wing, starts with 30 health and also has a passive Hero Power called Manastorm that has both players start with 10 Mana Crystals. He has many Dragons and cards that synergize with dragons in his deck like the lovely Malygos, which gives him plenty of spell power, Twilight Guardian, Nefarian, Grotesque Dragonhawk, Power of the Wild, Recycle and Sap – which he’ll use to kindly remove your Taunt minions – Dragon’s Breath, Flame Lance, Core Hound, and other similar Beasts and Dragons.

You might be starting with 10 mana crystals, but don’t load up on 10-mana minions because you don’t want to be playing one minion a turn; his removal options are too good for that. Having ten mana every turn lets you play all kinds of crazy combos, so you could bring a Miracle Rogue deck, or if you want to have fun, you could go with a Yogg-Saron Tempo mage, play plenty of spells to keep the board in check, and then release Yogg on turn 3 or 4. Fun times.

Overall, bring plenty of removal and some silence along to take care of Nightbane’s pretty beefy board and either bring some high-cost minions to take him out or rely on fun combos instead. You could also play an Anyfin deck and get all the murlocs to the board by turn 5 or so. I even played a C’Thun deck and was done by turn 4 because it’s easy to beef that guy up early on and then release him on a pretty empty board. In Normal, Nightbane won’t give you much trouble as long as you don’t let him build too strong of a board.

Heroic Nightbane has an extra 15 armor and the deck is different, but once again this is a relatively easy heroic. Just watch for all the windfury spells and minions and the beast synergies and you should be fine. And there’s a Ragnaros on the other side as well. If you’re having a hard time taking him out, use this Druid deck by Favouritism from over at HearthHead: 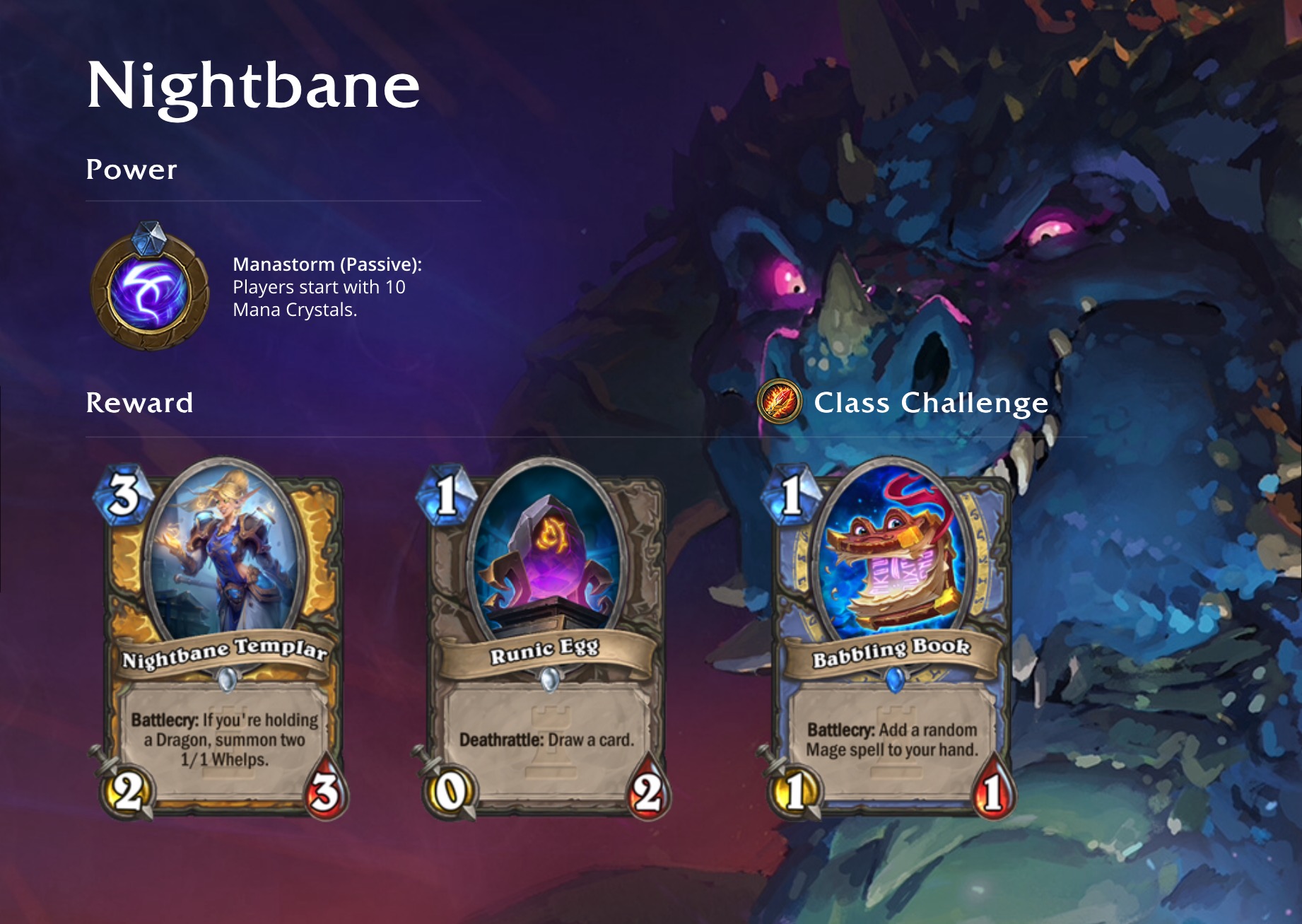 The last boss of Wing 3 is Terestian Illhoof, and his (once again) passive Hero Power is Dark Pact: Only Icky Imps can damage Illhoof. Icky Imps are 1-cost 1/1 minions with Deathrattle: resummon this minion and Illhoof loses 2 Health. He will mostly play Icky Imps, but also Many Imps (summons 2 Icky Imps), Imp Gang Boss, Summon Kil’rek (a 2/6 Taunt), Voidcaller, Voidwalker, Power Overwhelming, Bane of Doom, Corruption, Soulfire, Steal Life, and so on. In other words, he has spells to take out your minions relatively easily, so don’t rely on taunt minions that much. And, as you can imagine, there will always be minions on the other side, which is good because that gives you more opportunities to do more damage as long as you can keep from getting too much damage yourself.

The easiest way to take this one out is bring plenty of AOE spells to clear the board, taunt minions to keep those pesky little guys out of your face while also having them kill themselves trying to get to you, spells like Healing Wave if you go Shaman – since most of his minions are low-cost – and minions that synergize with spell casting. A Tempo Mage deck is a very easy way to beat this one as most of the deck’s spells can easily take out a 1-health minion as does the Flamewaker effect. Just make sure you bring some good removal for the high-health Taunt minions Illhoof throws your way.

Heroic Illhoof has 40 health and the Icky Imps are 2/2, which means you’ll be taking more damage and the board is harder to clear. You can’t just let the board fill up with 1/1s and then take them all out like in Normal; now, you need to make sure you’re doing some damage the whole time. If you’re having a hard time putting Illhoof back in his place, try Favouritism’s Priest deck from HearthHead: 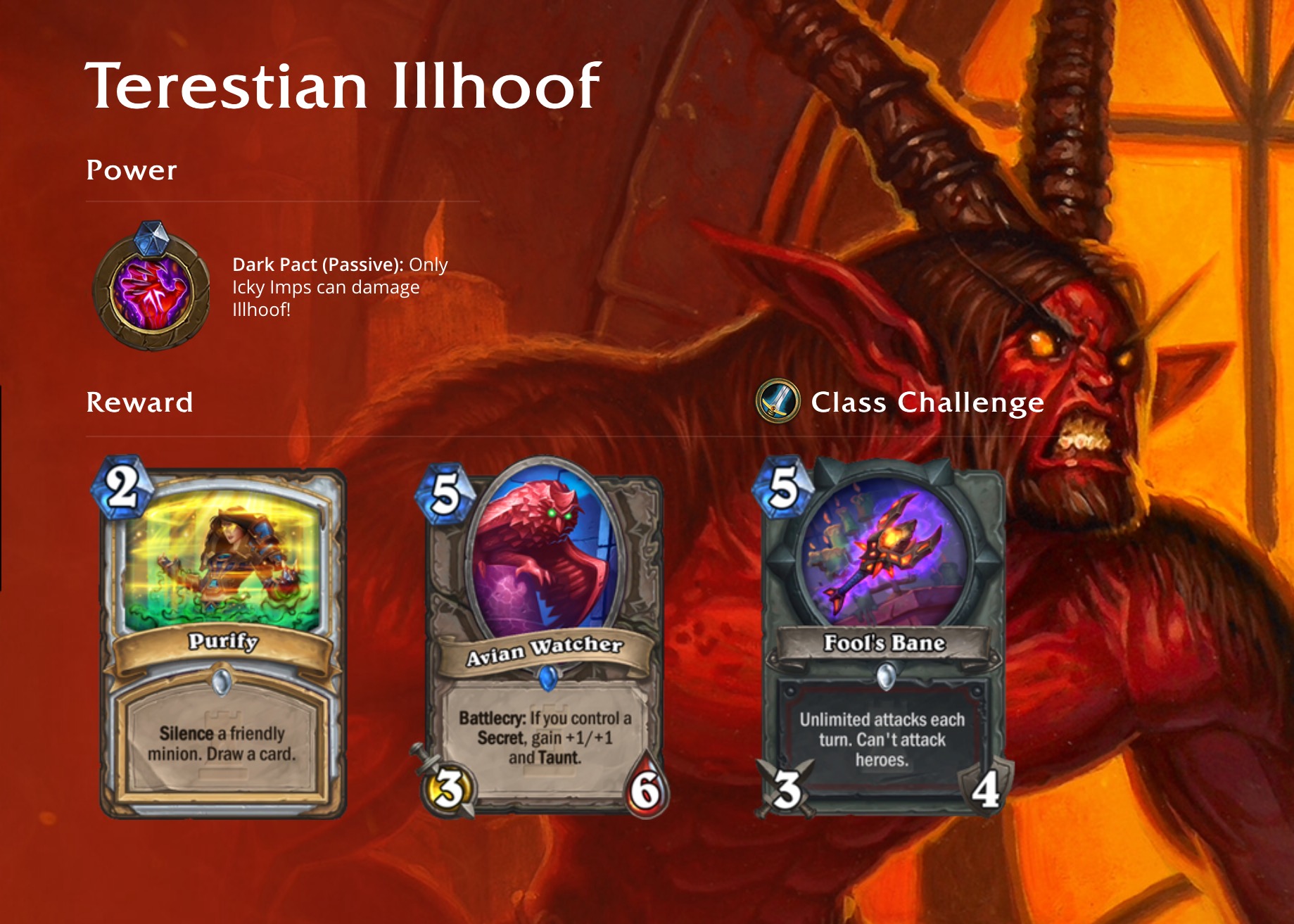 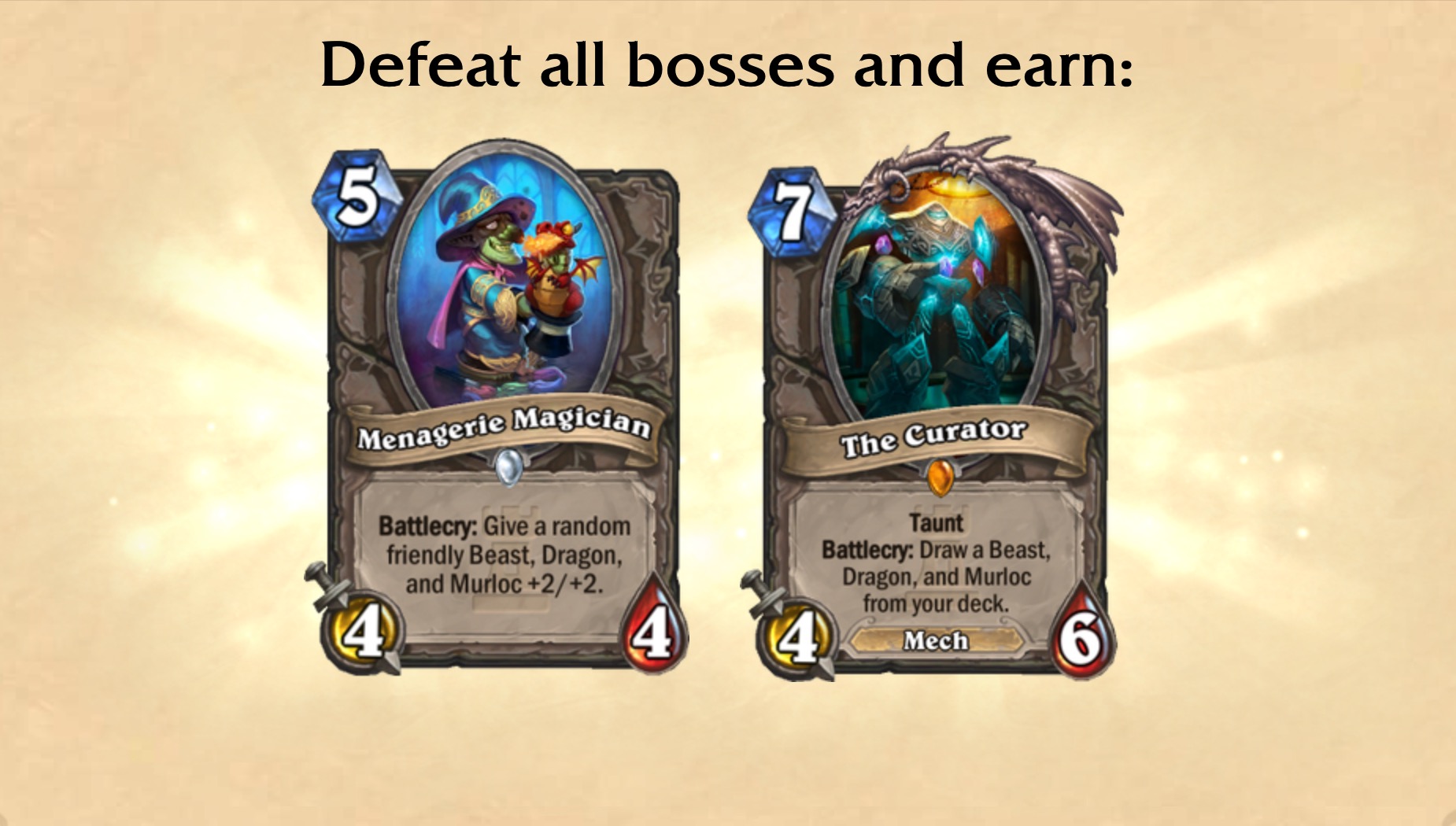