So this is how it ends, with the Hall of Explorers; not a bad place for Hearthstone‘s (Free) League of Explorers Adventure to conclude. After a month (and an extra, off week), the Adventure has concluded with the last – and largest- Wing of the whole Adventure. The Adventure ends at the Hall of Explorers, one of Azeroth’s foremost collections of ancient relics and a place of ongoing archaeological research. By the end of the Adventure, the Staff of Origination will be combined and all kinds of crazy things will happen. The four bosses were quite entertaining and the cards we are getting have been eagerly awaited, especially cards like Desert Camel and Elise Starseeker (one for practical reasons and one for the fun of it. So, let’s head for the Hall of Explorers and wrap this Adventure up. 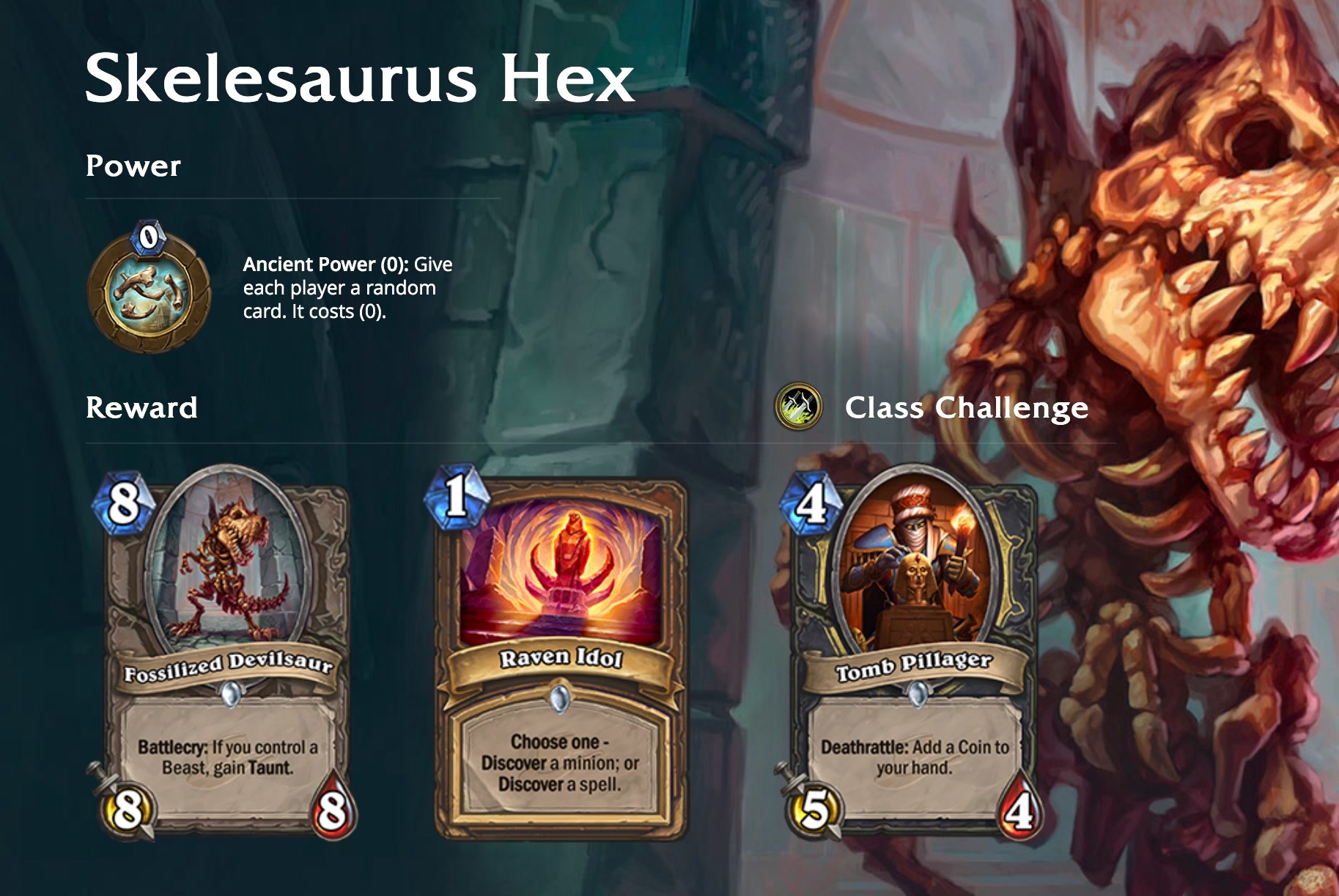 This encounter was not bad but it’s probably the most RNG one of the bunch so far, and that’s saying something. The way this encounter works is that the Boss has the Ancient Power Hero Power that gives each player a random card each turn, and that card costs 0 (in Heroic, only Hex gets the 0-cost card). As you can imagine, you might get a 1/1 useless minion while Hex gets the grandest Legendary. If the RNG isn’t working in your favor in the first few turns of the encounter, don’t think twice about conceding and starting all over again. His deck is primarily beast minions and he can throw plenty of them on the board, so expect to have a lot of minions to fight against for board control. While your primary goal will be to control the board, don’t take too long to go face because one random minion can change the whole board balance.

Hex‘s Heroic deck has Snake Trap and Bear Trap, Ancestral Spirit (which help him retain board control), Ram Wrangler, Savannah Highmane, Gahz’rilla, and King Krush among others. So, as you can see, the beast synergies will help Hex beat you up, so bring along plenty of silences to keep all those Deathrattle effects under control. Beating Hex will give you Fossilized Devilsaur and Raven Idol, with the second card definitely being the more interesting of the two.

If you are having a hard time taking Heroic Hex down, try TyDK’s Mill Rogue Deck: 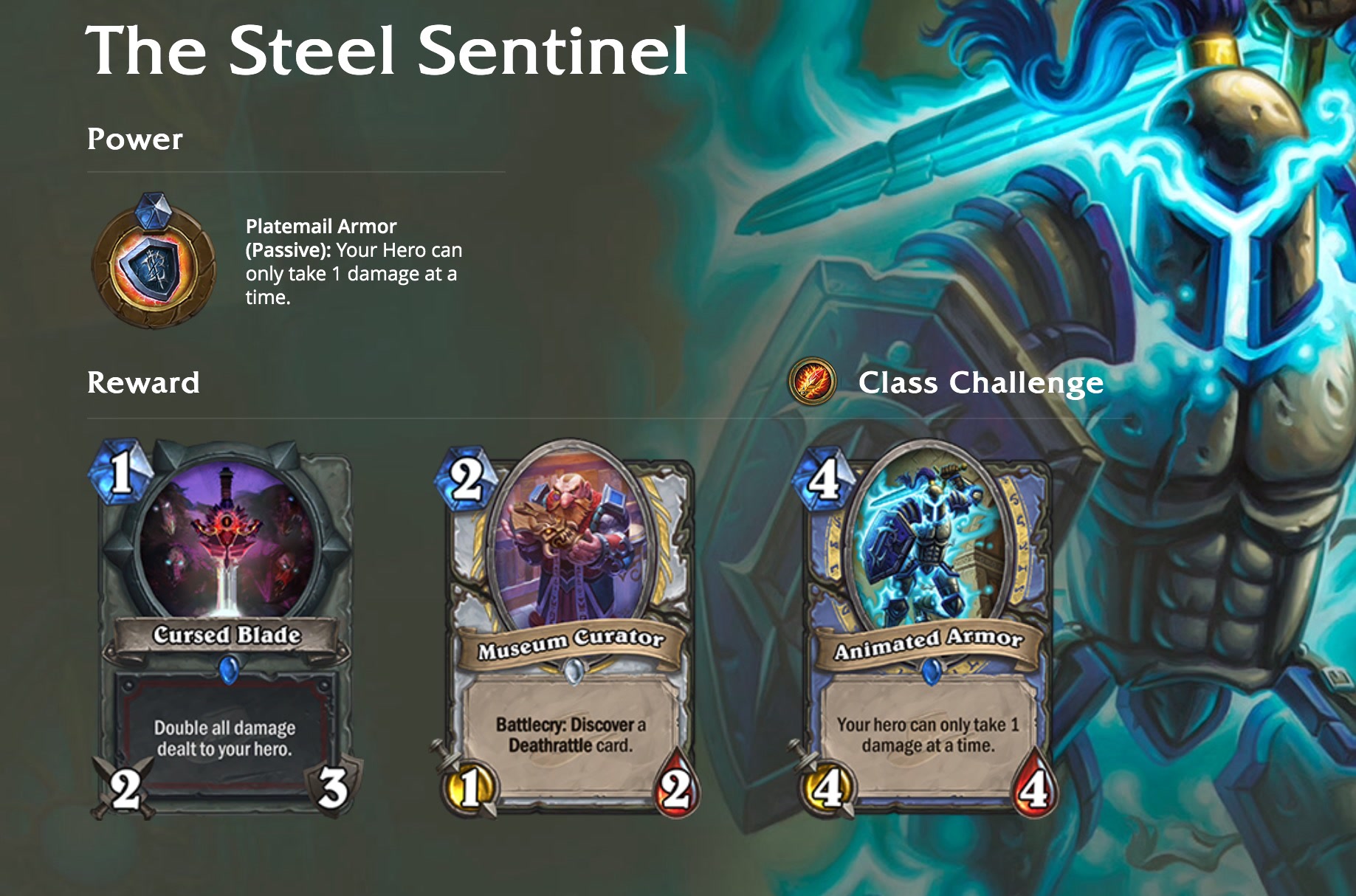 This encounter is definitely on the slow side because of Sentinel’s Platemail Armor Hero Power which when used, you can only deal 1 damage to him (and only 1 damage to his minions in Heroic). So, as you can guess, combos like Equality + Consecration will be very helpful in clearing the board as will Repentance and Avenging Wrath. You’ll need some taunts and some healing to make it through the long battle unharmed and to make it through all the armor he’ll be getting through cards like Armorsmith.

He also has plenty of taunt cards like Lord of the Arena and Tirion Fordring, so bring along some silence cards. And since he has Tirion as well as Truesilver Champion and Arcanite Reaper, bring a card like Acidic Swamp Ooze to take care of weapons. Defeating this Boss will get you Cursed Blade and Museum Curator, the second being again the most powerful of the two cards.

If you are having a hard time taking care of The Steel Sentinel in Heroic, try gbrandonn’s Warlock deck: 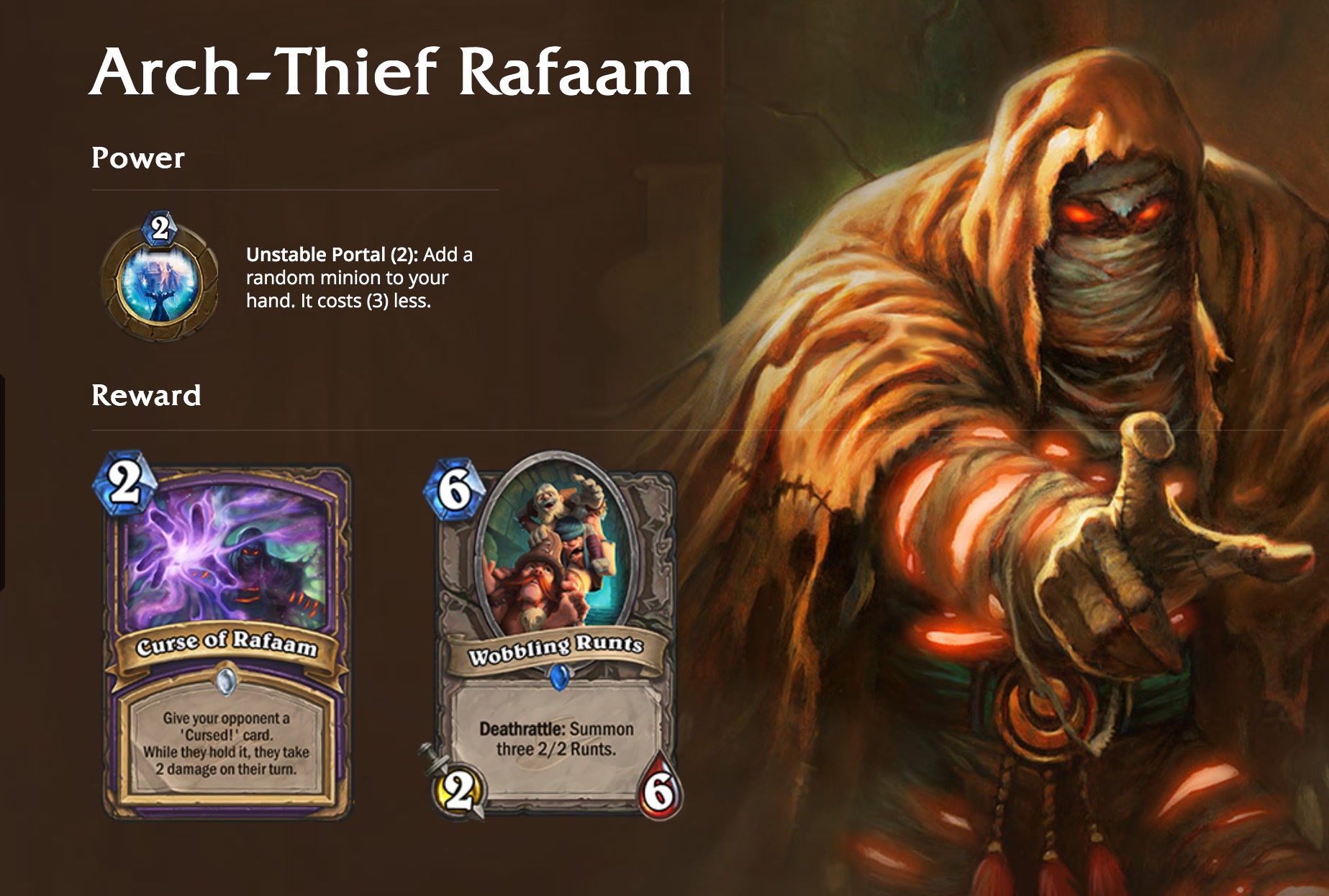 This encounter is a lot of fun the first time you play it because you build your strongest deck for the encounter but Rafaam promptly steals it from you and lets you play with a different deck. But now that you know the trick, you should go in this encounter with the worse deck possible. Of course, his Hero Power is Unstable Portal, so RNG might turn the tide against you despite his crappy deck. The deck you’ll get for this encounter has Rare Spear (Whenever your opponent plays a Rare card, gain +1/+1), so a deck full of Rares will do very nicely. You’ll also have a few Discover cards like Jeweled Scarab, Dark Peddler, and Raven Idol, as well as minions like Eerie Statue, Ancient Shade, Harrison Jones, and Entomb. Overall, a pretty good deck that should make this encounter pretty easy. Defeating Arch-Thief Rafaam will give you Curse of Rafaam and Wobbling Runts.

If you’re having a hard time beating him (which you really shouldn’t), try this all-rare Warrior deck by nickhimself: 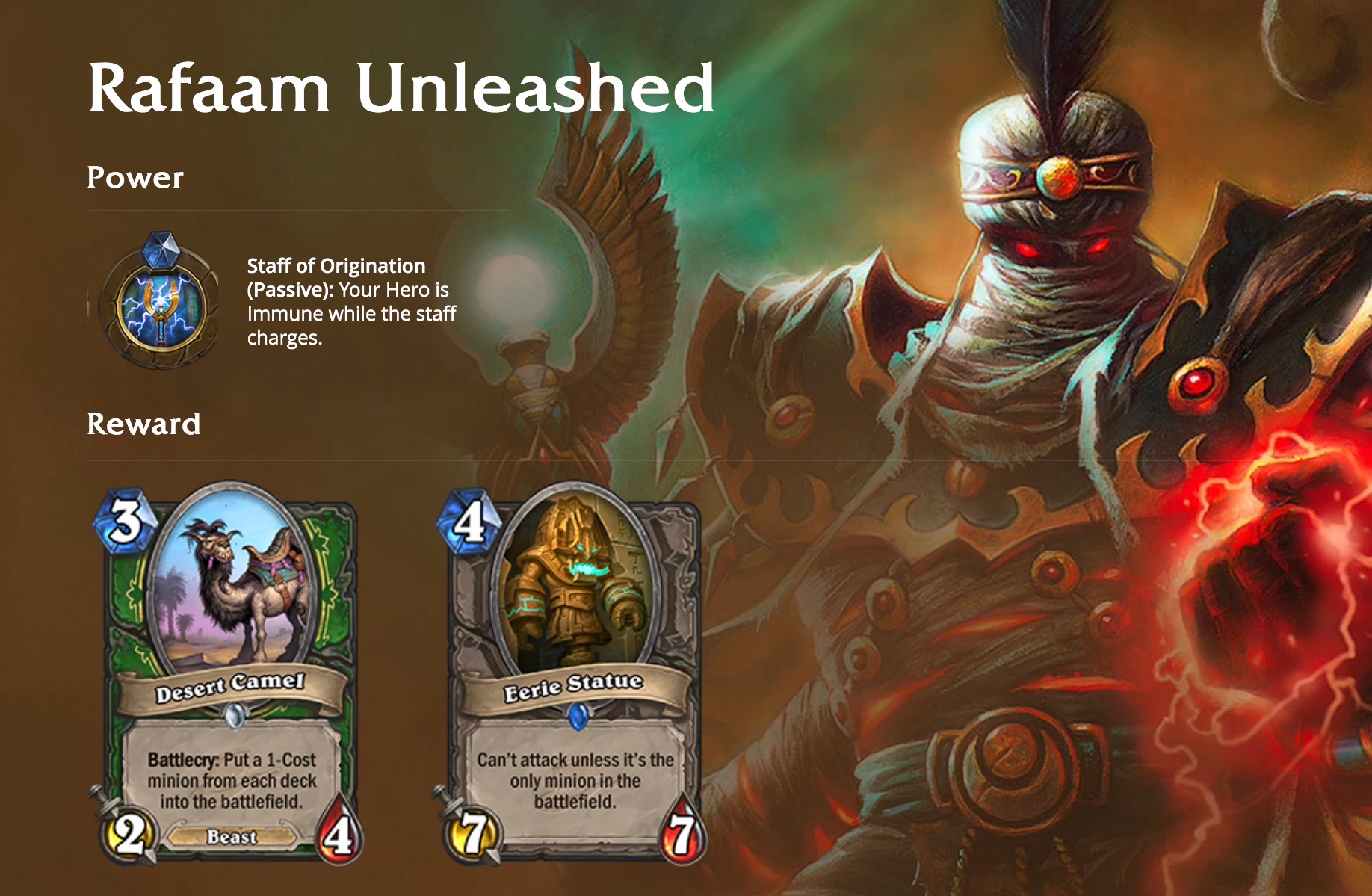 This version of Rafaam is definitely more challenging than the previous encounter. The way this encounter plays out is that Rafeem has a staff he charges for a few turns at a time, and while he’s charging it, you can’t harm him. When the staff finishes charging, he summons huge bosses on the board but then he’s vulnerable for a turn. You’ll have to be controlling the board (and especially clearing out any taunt minions) so you can attack every time you have the chance. You’ll need some heavy duty removal because the bosses are pretty huge. They are 5/5 in Normal and 10/10 in Heroic, so you’ll need cards like Shadow Word: Death, Mind Control, Entomb, Mass Dispel, Lightbomb, and so on. You should also have cards like Alexstrasza that can shorten the encounter dramatically and save you having to fight all those bosses.

At the start of the encounter, your Hero Power is swapped with Artifacts, a 2-mana power that gives you 0-cost cards to help you with the encounter. These cards can replace your hand with Unstable Portals, put a random spell in each hand with yours being 0-cost, give a minion +10/+10, fill your board with 3/3 Mummy Zombies, destroy a random enemy minion, and so on. Defeating Rafaam and the whole Wing will give you Eerie Statue, Desert Camel, Elise Starseeker, and Arch-Thief Rafaam.

If you are having a hard time defeating this boss in Normal or Heroic, try this deck by Mephybenny: