Well, this is it, Naxxramas is over. We’ve had five awesome weeks of new content in Hearthstone (Free). In the words of Dr. Seuss, “Don’t cry because it’s over, smile because it happened." That might be a little over-dramatic. Anyway, this last part of Naxx is super cool, and continues to totally nail the feel of the actual World of Warcraft boss fights in card game form. This whole expansion is going to be hard to top. 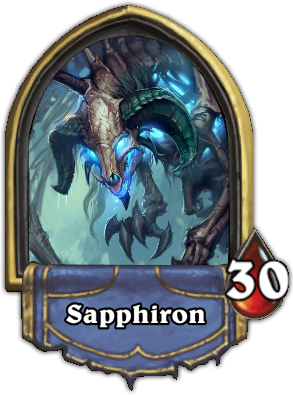 Alright, so in WoW proper, Sapphiron is a real pain. He got way easier in the re-release of Naxxramas, but, still challenging for overall raid coordination. He’s a big ol’ frost wyrm that has a bunch of really threatening attacks, but none are as notorious as his frost breath. In WoW, people would get frozen, and everyone would need to hide behind said block or else they’d basically get insta-gibbed. The Hearthstone fight is similar, as it start out with you having a permanently frozen 2/10 gnome that protects minions to its immediate right and immediate left.

At the start of every turn, Sapphiron will blow out some frost breath, kill any minion that’s not protected, then play whatever cards he has in hand. It’s a reasonably easy gimmick to mitigate, because you predictably know what dudes are going to die. We’ve seen far worse from boss abilities where they seemingly target your guys at random. Not so here.

Sapphiron was pretty easy to beat with the MVP deck of all these guides, Trump’s Murloc Zoo, which is cheap, effective, and can be exploited in fun ways. Keep cards like Leper Gnomes on the outside so they die for free damage, keep a steady supply of Merlocs coming down, buffing guys with Power Overwhelming when you need to, and it’ll be an easy victory. The key is just not over-extending. 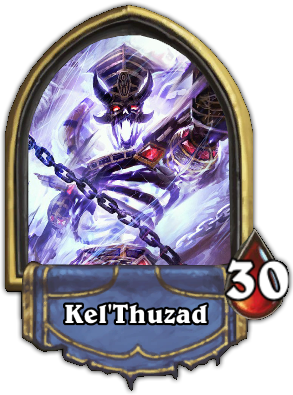 This is a super interesting fight, largely because they introduce boss phases. If you never played WoW, here’s how this typically worked- Bosses would do a particular thing (in this case, Kel’Thuzad’s ice attack) until some kind of trigger happens. It could be health related, something to do with the environment, or both. In this case, as soon as you blow through Kel’Thuzad’s 10 armor, the second phase of the fight begins.

Managing this transition, just like WoW bosses, is key to the fight. As soon as he transitions, he ends your turn, and spawns two 3/3 minions with taunt. It takes a bit of luck of getting your deck to give you what you need, but ideally what you want to have happen is on the turn where you’re going to go to phase two, get him down to 1 armor or as little as you can without going over, play all the cards you’re going to play that turn, then attack with your biggest minion to blast through his last armor. Even though he steals the turn away from you, if he was at 1 armor and you attack with a 5/5, he’ll lose 1 armor and 4 life.

The tricky part is, you’re racing between taking 2 damage every turn from his phase one hero power, with your ability to both transition to phase two and have the cards to not stall out against the two 3/3 taunters.

This deck is actually a way better (and cheaper) version of the deck I originally used to beat him. As a Priest, you’ve got heals to mitigate his phase one damage, and holding on to your Shadow Word: Pain is a great way to deal with the 3/3 taunters. Save your nukes for Kel’Thuzad’s face, and it shouldn’t be too difficult. Even on normal Kel’Thuzad can be real challenging, specifically because you need the game state to be pretty perfect to transition between phases. Keep at it, and you’ll get him. 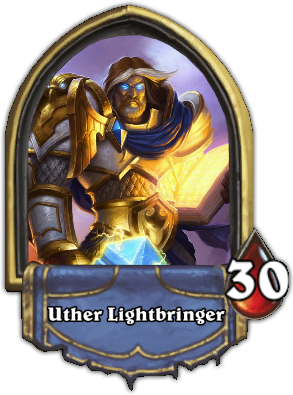 This class challenge is about as much fun as the warrior class challenge, which is to say, not much fun at all. Once again you’re up against Kel’Thuzad, except this time instead of having a deck that manages his gimmicks you’re forced to use this combo-dependent Paladin deck.

You’ve got four Echoing Oozes, and one Blood Knight. These are your bread and butter for the fight, as the rest of the deck essentially consists of buff cards. Winning is dependent on playing an Echoing Ooze, buffing it, having it split at the end of the turn, and double those buffs since the ooze inherits all the properties of its original.

The king combo you should be shooting for is playing an Echoing Ooze, giving it divine shield with the Argent Protector, and then on the next turn dump out an Argent Square and a Blood Knight. That’ll result in a board full of dudes and a 12/12 Blood Knight. The attempt I won I was able to then toss out a Defender of Argus to draw some heat off my Blood Knight which allowed me to swing in enough times to win. Ironbeak Owl is great for silencing Kel’Thuzad’s taunt minions, and can be a good way to mitigate dealing with the two 3/3 guys he spawns when you shift him to phase two.

All in all, this is another class challenge that isn’t much fun, and goes to show that buffing Echoing Ooze might not be that viable in actual constructed play. The amount of cards it takes to make a huge ooze puts you at a significant card disadvantage, and is very slow, making this a super challenging fight.