As I completed the final class challenge of the Construct Wing, it hit me, next week is the last Hearthstone (Free) expansion wing to open… Potentially for a long time. Blizzard hasn’t mentioned any solid plans for more expansions yet, and, knowing how Blizzard has operated in the past, it might be a while. So, let’s savor these last couple wings, eh?! Also, I know I’ve been slow to put up the guides for the Heroic side of the previous wing. I really wanted to believe beating them were possible without just drawing a god hand and having the bosses draw crap the whole game, but I’m not so sure. I’ll get it up soon.

Additionally, here are the rest of the guides I’ve done on the Curse of Naxxramas content: 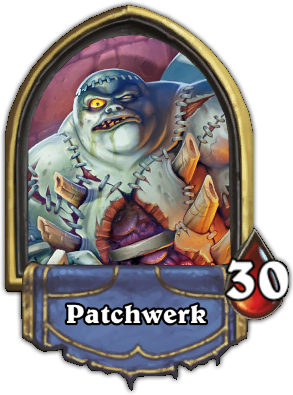 I’m actually sort of impressed by how well they managed to make the Patchwerk fight in Hearthstone feel like the Patchwerk fight in World of Warcraft. In the WoW raid, Patchwerk was the test of your raid group’s damage output. It was a straight burn fight where you blew everything you could in to him and hope to kill him before he one-shot your tank, and then entire raid. The vibe is similar here.

Patchwerk has no deck, and draws no cards. Instead, he’s got a hero ability where he can destroy a minion for 4 mana, and is equipped with a weapon (His hook, from Wow) that swings in for five damage. So, like his raid boss counterpart, this is a total burn fight as you’ve basically got six turns before you’re dead from hook damage alone. Additionally, since he can destroy one of your minions starting with having enough mana at turn four, we need a swarm of little guys to mitigate the hero power’s impact. So… *drumroll* Zoo again seems to be the way to go. (Isn’t that how all these guides are? Run zoo, win.)

I’m still seriously digging the basic Trump Murloc zoo deck, even though it’d probably make sense to run some Acidic Slimes or other weapon removal cards. I was able to kill Patchwerk pretty reliably before the Hook damage became much of a problem. 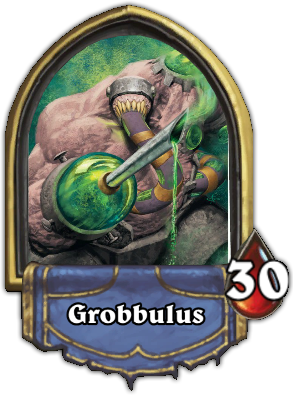 Alright, well, so remember what I said about just using zoo for everything? Well, that definitely doesn’t work here. Grobbulus’s hero power allows him to do 1 point of damage to all minions, and if any die they summon a slime. So, all your little nerds that make zoo so great would basically just be fueling Grobbulus’s side of the battlefield. You might be thinking, “Alright, well, that’s not that bad, there are bosses you have to cheese by allowing them to summon a board full of 1/1’s, so whatever." The problem with that is, he’s got a card called Mutating Injection which gives a minion +4/+4 and taunt for 3 mana, it also seems like he has tons of these.

So, let’s just roll with minimal minions, and the best deck that’s doing it right now (in my opinion, anyway) is the Freeze Mage deck that’s been making the rounds. It’s the same deck used for Heroic Heigan, and has all the tricks you need: Loads of direct damage through fireballs and frostbolt/ice lance, board sweeps through Flamestrike and Frost Nova + Doomsayer combos, and then giants to finish the job. 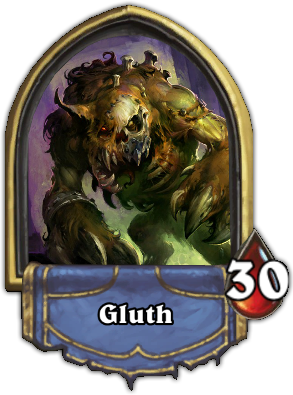 This is an interesting fight with a lot of components at play. First off, Gluth’s hero power changes the health of all minions to 1 for 2 mana. From there, he equips the weapon Jaws which is a 1/5 which gains +2 attack whenever an minion with deathrattle dies. Oh, and he can give himself +6 attack using Enrage for 3 mana. He summons loads of Zombie Chow minions which heal you for 5, but remember, these deathrattle effects just power up his jaws.

I had great luck with the same Freeze Mage deck mentioned above. I’ve seen some strategies people have been discussing about using weapon destruction to negate Gluth’s jaws, but having them super pumped up seems somewhat inevitable and it seems sort of bad to put all your hopes in to drawing a Harrison Jones or one of your two Acidic Slimes. Instead, just taking a few hits when his Jaws aren’t very big yet won’t kill you, then from there you’ll likely have some frostbolts and ice lances to keep him from attacking, and a couple ice blocks to survive another couple turns if you need to. Pretty easy, overall, especially with zombie chow you can pop to get some health back if you need it. 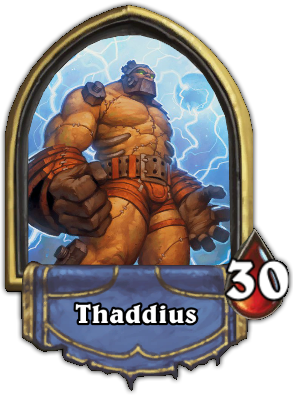 Thaddius’s polarity shift gimmick from WoW is alive and well in Hearthstone, and makes for a pretty silly fight. The polarity shift in Hearthstone swaps the health and attack of your minions, so dudes without much attack but loads of health end up being huge bombs. I’ve been running a Priest deck with some of the new Naxx cards for a while now that I tried out, and it actually worked awesome. Here’s the list:

Thaddius’s polarity shift will instantly pop Nerubian Eggs, Power World: Shield ends up making your guys more beefy, Wild Pyromancer and your 0 or 1 mana cost spells can wipe the board if you need it, and you should pretty effortlessly be able to swing in for enough damage to win with your minions, particularly once you get Maexxna out. As far as the other legendaries, this deck is more for just regular play, so feel free to swap ’em out with whatever beefy minions you have without much attack, knowing that the polarity shift will make them hit really hard.

This is another fight where it feels like you’re just going up against the random number generator in the game more than anything else. The game gives you a deck with loads of dudes that have enrage, and most of Grobbulus’s guys are big enough to kill them in one hit. Additionally, a lot of his minions will have taunt, and buffs.

The way I finally ended up beating him was by having a Frothing Berserker get huge, and getting lucky enough for him to not play anything with taunt. This really is not a fun class challenge, especially since most of it just amounts to hoping you get the cards you need before he does.

Alright, so while the warrior side of things really sucked this time around, the priest stuff is super fun. You’re given a deck loaded with ways to increase the health of your guys, and minions like Lightspawn. The strategy seriously is as simple as playing cards to make your guys big, get polarity shifted, and swing in for loads of damage. It’s basically the same thing as described above, but with a deck the game gives you.