Man, Hearthstone is really working up to be something awesome here with the way they’re releasing new cards via these single player adventures. If you had any complaints about the difficulty of the heroic Arachnid Quarter, you should be more than satisfied with what you’ll find in the heroic side of the Plague Quarter. These are easily the toughest challenges yet. In case you’ve missed any of our previous guides, here they are: 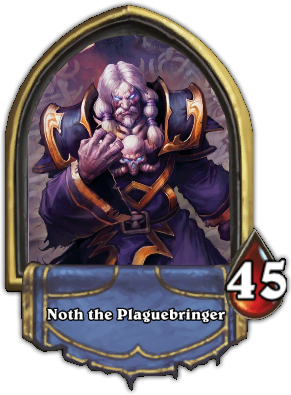 Well, if you thought this guy was annoying in normal with his ability to endlessly summon 1/1 skeletons, in Heroic you’ll be up against the same thing… Except this time they’re 5/5’s. This means thinking extra hard when it comes to making any trades with minions that would result in one of your minions dying. Additionally, it’s important to not over-extend, as heroic Noth packs a card called Plague in his deck which destroys all non-skeletons. Pack your side of the battlefield with minions, and I can almost promise this is going to come out and you’re going to lose.

Here’s the Priest deck I used, originally created by Zeto and posted over on Hearthpwn:

The basic strategy revolves around focusing on maintaining as much board control as you can with your Shadow Words, and buffing up either a Lightwell or a Lightspawn. On my first successful takedown I had much more luck just controlling the battlefield and stalling until Alexstraza got out, knocking Noth down to 15, then finishing him off on the next turn… But I’ve since gone back and beat him without Alexstraza cheese. Again, it seems like that card is a total MVP for heroic mode. 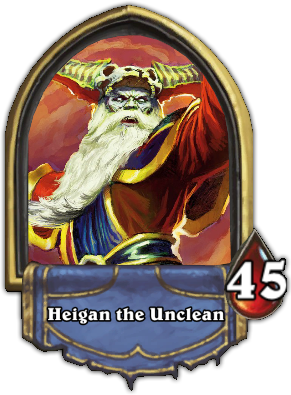 This guy’s gimmick was a pain in World of Warcraft, it was annoying in normal, and it’s extra bad in heroic. So, previously for 1 mana he could do 2 damage to your left-most minion. In heroic mode, it’s 3 damage for NO mana. This means he’s doing it every turn automatically, and you basically can’t play any minions that you want to stick around for more than a turn unless they’re really beefy.

Luckily, there’s been a deck called “Freeze Mage" floating around for quite some time now (So long I’m honestly not even sure who originally made it.) that focuses on stalling the game, surviving as long as you can, and dumping out huge minions to finish the job. It’s perfect for this. Here’s the Mage deck list:

Alright, so the way this deck works against Heigan is just how you’d play it against a normal player. Save your Frost Novas for when you’ve got a Doomsayer to followup with to use it as a complete board wipe for a total of 5 mana.  Use Flamestrike the same way, and keep Ice Block up for when you’re getting low. Something to be very careful of is not to clear all of Heigan’s minions if there are Voidcallers on the board and he’s got a lot of cards in his hand. In a perfect world, you’ll be able to stall until he’s down to 1 or 2 cards, at which point you might have a reasonable assurance that you’re not going to wipe them out and have them quickly replaced by even more annoying demons.

Ideally you continue to stall and wipe his board until you can play Alexstraza, get him down to 15, and your health should be low enough that you can cast giants for free. If they survive, it’s an easy win the next turn, otherwise hopefully you’ve got a Fireball or something else on deck to finish him off with. This deck is very fun to play. 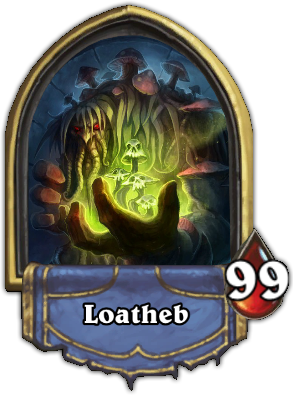 Compared to Heigan, it seems like Heroic Loatheb is way easier. Of course, you’re still counting on some serious random number generator love for there to be spores out when you need them, but at least you can play minions without them instantly getting obliterated for free every turn. Anyway, Loatheb keeps the same hero power, but this time it’s free, so you’re essentially racing against him doing three damage to you every turn.

I most consistently beat him with the Priest, as it seems healing is super vital to both keeping your minions up as well as not dying yourself. Here’s the deck list:

The basic idea here is to get as many bodies on the battlefield as possible to take advantage of the spore buff and bait Loatheb’s removal cards which also spawn spores. Argent Squire is ridiculously good, as its shield makes it stick around an extra turn, similarly the Murloc Tidehunter and Haunted Creeper can potentially give you two guys to soak up the spore buff.

Living the dream with this deck consists of a draw that has some low-cost dudes (Argent Squire would be amazing), a Shadow Word to take out the Fen Creeper Loatheb starts with, then enough guys to throw out to get Loatheb to spawn more spores. Throw out a Holy Nova on turn 5 (or later) to pop as many spores as you can and hopefully swing for lethal.

Of course that’s not how it’s always going to go, but, that’s the situation you’re looking for. Yeah, it’s heavy on luck both in getting the cards you need and Loatheb playing the cards you want, but Heroic Naxx so far seems to involve lots of crossed fingers and random number generator love. Oh, and Alexstaza doesn’t work on this fight, so you’ve got to beat him down the hard way.

Stay tuned for another guide on how to beat all these bosses using entirely free to play decks.