I find the idea of horror games to be quite fascinating. For the most part, the video game medium is about making the player feel powerful. It’s about making you feel like you can do things like take on an entire army by yourself, kill a giant, fire-breathing dragon, win an F1 race, or karate a guy in the face so hard that he vomits. Even death is no object, since the ultimate power almost every game allows you is that of the second chance. That’s all awesome, and game experiences like those can certainly be tense, but they’re rarely legitimately scary. Horror games, on the other hand, tend to strip you of your feeling of power, putting you up against something you are very unlikely to survive, and giving you very few tools to do so. You can’t just scare a player by threatening them with death, though, because dying is trivial in the video game world. Instead, you have to find a way to get under the skin of the player in a more subtle way. Or just have a zombie dog jump through a window unexpectedly, I guess.

I think for a lot of people, particularly American console gamers, the horror genre started with Resident Evil. It certainly popularized scary games with the mainstream before increasingly morphing into a horror-themed action series. It used a lot of jump scares, but it also used the inherent creepy feeling that comes from being stuck in an unfamiliar, confined location. It helped that Resident Evil had some really nice graphics for its time, making excellent use of perspective and the extra flexibility working in a 3D space allowed. As much as it was a seminal moment for the genre’s overall popularity, however, in reality, horror games had been alive and well pretty much everywhere except American consoles. Resident Evil‘s “parents", the Japan-only 8-bit game Sweet Home and the Infogrames genre-defining classic Alone In The Dark, are both quite well-known, but there were a lot of other scary titles, some of which came from the unlikeliest of sources. Corpse Party ($11.99) is one such game. 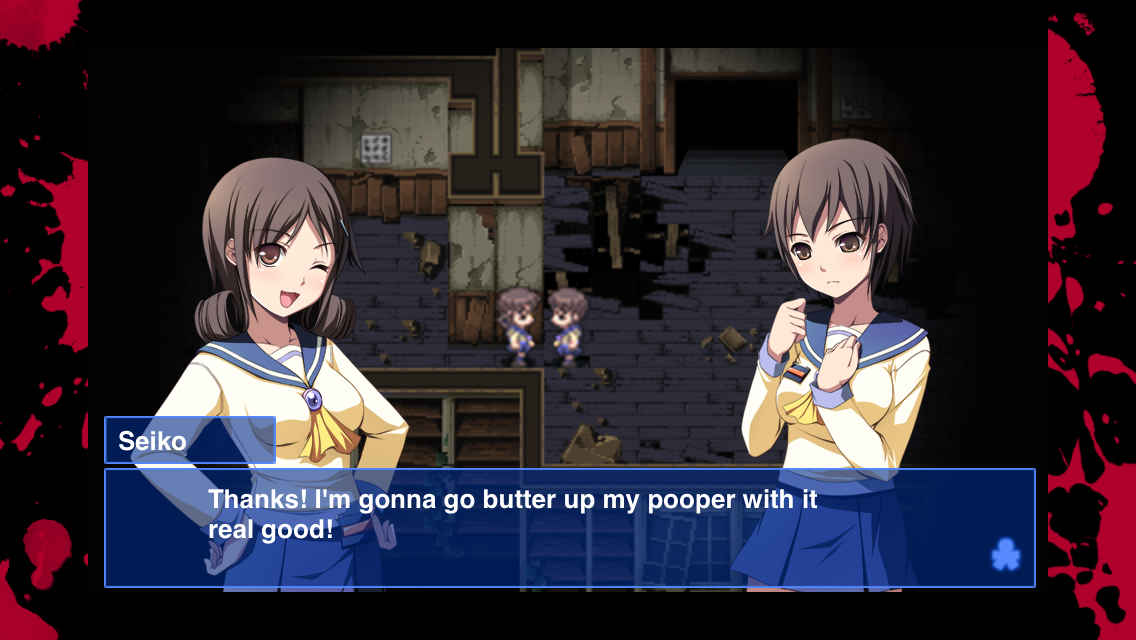 Originally released for the Japan-only PC-9801 home computer in April 1996, scant weeks after Resident Evil, Corpse Party was essentially made by just one person, a university student by the name of Makoto Kedouin, who put the game together in an early version of the well-known RPG Maker software. The game eventually won a contest, earning a nice cash prize for Kedouin, so I think we can safely surmise that it was well-received for a PC indie title. The game next surfaced almost ten years later in a port/remake for Japanese feature phones called Corpse Party: New Chapter, which was expanded and enhanced to create the new PC release, Corpse Party: BloodCovered, which trickled out chapter by chapter in Japan from 2008 to 2011. That game was then enhanced and ported to the Sony PSP in 2010 as Corpse Party: BloodCovered …Repeated Fear, which was subsequently ported to iOS in 2012. PSP owners got an English version of the game from XSEED a few years back, but iOS gamers were left to twiddle their thumbs until this year, when an English version of the app was finally announced and released.

That’s quite a history lesson, but I think it’s important to understand the context this game was created in and the limitations that came with it. The game is played entirely from a typical top-down RPG perspective using fairly simple sprites and tile-based graphics, but that’s because even with all the prettying up, this is still just an ascended RPG Maker game. It’s short and has a fairly limited scope, but that’s because it was made by an individual 22 year-old university student. It has a lot of cliches and tropes that feel played out today, but that’s because this game is old enough to vote. It’s an iPhone-only app, but that’s because the Japanese version was released before the iPad had much uptake in Japan. There are a lot of reasons to explain the many flaws in Corpse Party, though whether reasons will help you forgive those flaws or not is another matter entirely. 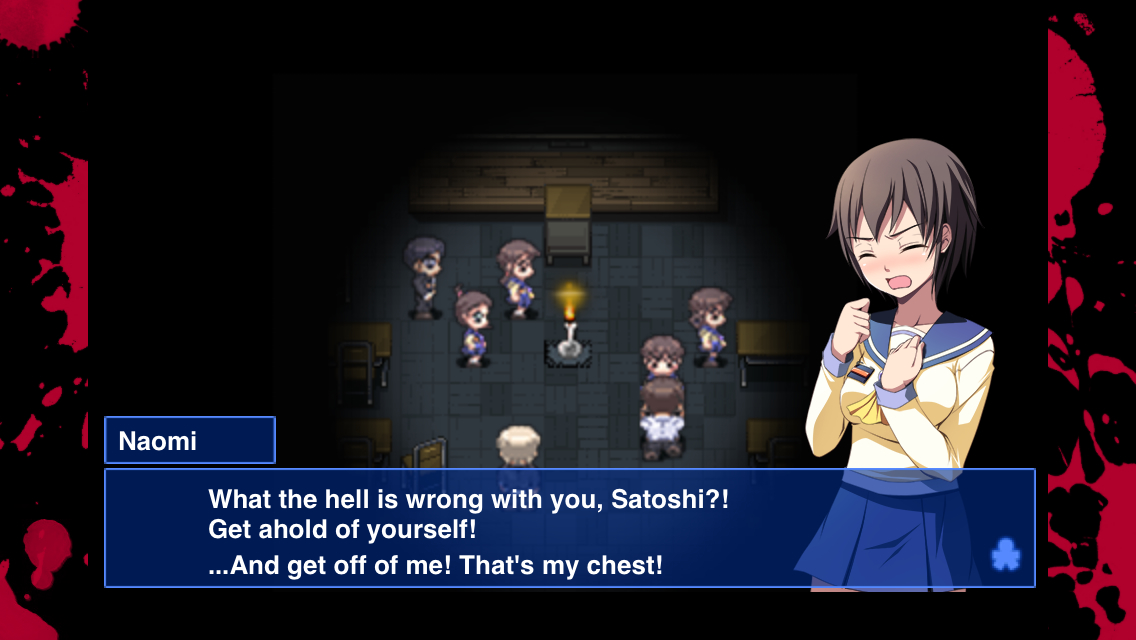 Let me make the case for the game, first. Corpse Party is a chapter-based horror adventure game that’s heavy on dialog and light on puzzles. It follows the story of a group of high school students and their teacher who, after performing a seemingly harmless friendship ritual after-hours at their school, find themselves trapped and largely separated in the demolished elementary school that used to stand on the same grounds. You’ll play as a few different characters through the course of the game’s five chapters, but their goals are the same: try to find the others and escape alive. It proves to be considerably more difficult than they originally anticipated, as the school is infested with some seriously angry spirits. The bodies of previous students lay scattered around as testament to the lethal nature of the situation.

While the game itself only occasionally involves more than walking from here to there and picking up that item or talking to that person to proceed, the story and characters are interesting enough that the game can easily pull you in. Like a visual novel, the game has a lot of endings, although most of them are bad ones that result in an immediate game over, with just one per chapter moving you along in the story. As you work your way through the chapters, the number of bad endings increase, which is a fancy way of saying the game finds new ways to kill you. The game is pretty simple and very linear at the beginning, but later in the game, there are lots of optional events and items you’ll need to make sure to check off if you want to survive. The game keeps track of all of the endings you’ve found in each chapter, and it’s kind of fun to uncover them, even the bad ones. The story is really trope-heavy, and if you have a decent amount of experience with Japanese horror, you’ll probably be able to guess where it’s going most of the time, but it’s still a pretty good ride. It’s less scary than it is shocking, but there are many parts where the tension is built carefully enough to put you at serious unease. 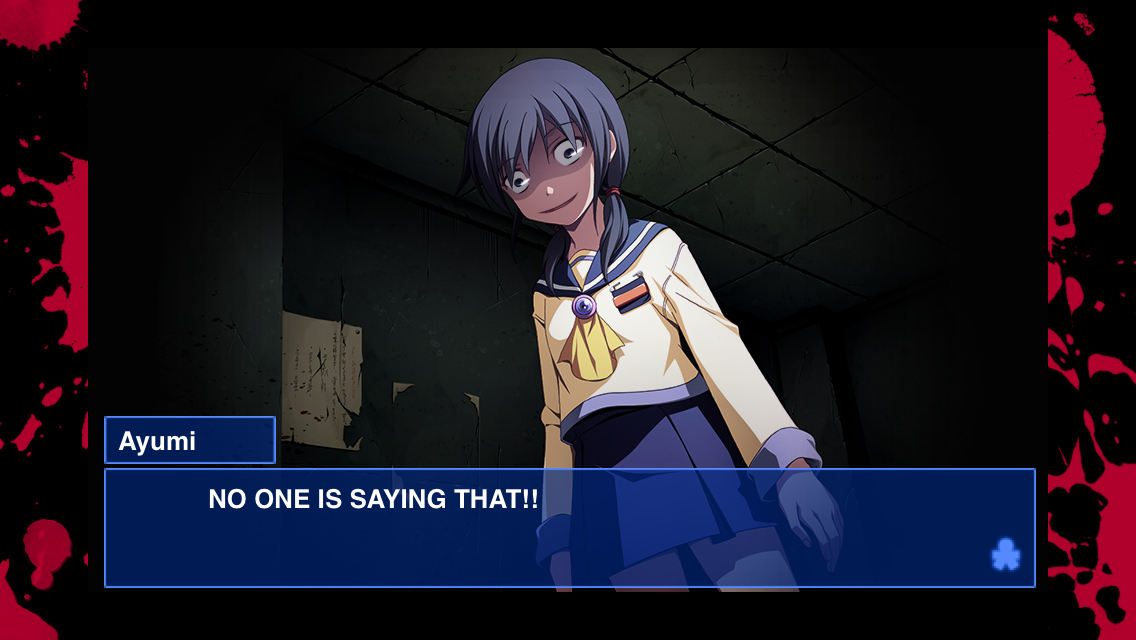 There isn’t any fighting to speak of, but there are moments where you’ll have to outrun or sneak past something something that can kill you. These sections are frustrating with touch controls because the virtual stick works just like you’d expect one to in an RPG. The character moves tile by tile in cardinal directions and it’s very easy to make a wrong step. Fortunately, these sequences are mostly front-loaded, so you won’t see too many of them after the first couple of chapters. You’ll want to save at every chance you get, though, because stupid deaths can happen without warning. The controls in general are kind of lousy. You move around with that virtual stick, while tapping anywhere works like a use/examine button. If you two-finger tap or tap and slide, you’ll open up your menu screen, something that happens a lot accidentally when you’re just trying to check things. Another button might have been helpful here.

I’m already slipping into the bad points here, so I’ll hit one more good point before I bring it up to full speed. The game has a really good translation, full of character and humor. It has a couple of lines that perhaps go a little too far, but they’re almost exclusively given to one character who has that kind of personality. The voices are left in Japanese and probably contribute greatly to the game’s hefty file size, and while they are of excellent quality, I doubt it makes a difference to most English players. The game has excellent music that has a spooky retro quality to it, though it’s sometimes a little too peppy for what it’s trying to get across. You’ll definitely want to play with the sound on to get the proper experience, though. The game loses a lot of its atmosphere without it. 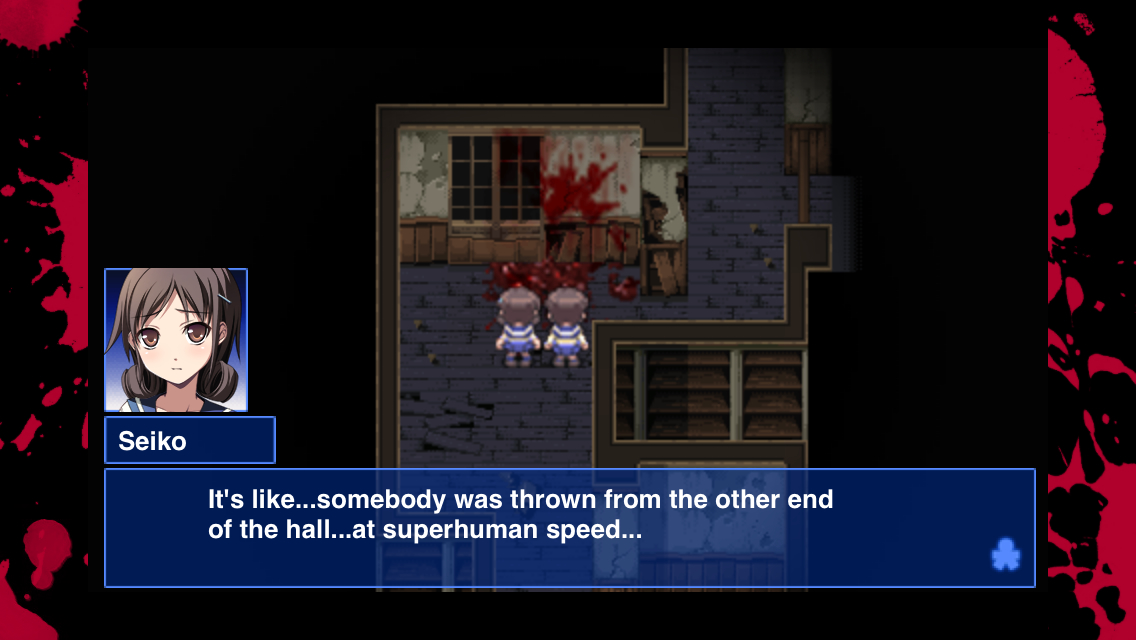 I think the game itself is worth playing, as long as you’re okay with its premise of visual novel meets RPG Maker, but this port is terrible. There’s no iPad support, the game has borders on a 4-inch screen, there’s a blurry filter on top of the graphics, the controls are lousy, and that’s not even the worst of it. The really bad part is that the game is incredibly buggy. It frequently crashes, especially when it needs to bring up a special graphic image, and I actually ran into a showstopping bug in the middle of the third chapter on my iPhone 5S. Neither restarting the chapter nor completely reinstalling the app solved the issue. I was only able to finish the game by borrowing someone’s iPad Mini, but there was still plenty of crashing on that hardware, too. Unfortunately, I don’t have every piece of hardware to test it on, and it seems like the publisher must not, either. I know bugs happen but in a game at this price tier that is already focusing on a more limited range of hardware, it’s frankly inexcusable for there to be critical crash bugs in the main story path.

While I’m fairly certain it will be fixed at some point and my main issues will be solved, the fact of that matter is that right now, Corpse Party is up for anyone to buy in the App Store in a shamefully poor state. I can speculate as to how this might have happened, since it seems to be confined to the localized version, but whatever the reasons, it’s kind of hard for me to recommend the game at all in its present state, since I can’t be sure you’ll even be able to finish it. Provided it does end up being fixed, horror fans who don’t mind a retro take on Japanese horror will find a chilling tale that nearly justifies the price it commands, but for now, unless you want your wallet to meet a bad ending itself, don’t bother crashing this party, lest this party crash on you.