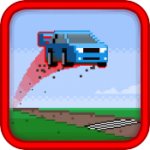 If you need another look at Cubed Rally Redline then be sure to check out our TA Plays video of the game embedded above. Also, since our original review, a big update hit that added a sweet new Rally Mode as a 99¢ IAP that came with 20 distinctive levels to race through in addition to the main endless mode. It’s all a lot of fun, so don’t hesitate to download Cubed Rally Redline while it’s free until this Sunday.