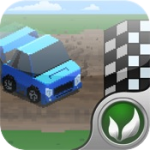 A couple days ago we first posted about NoCanWin.com’s Cubed Rally Racer [$1.99] and the few screenshots along with the trailer saw a huge response both in comments and on our forums. Two days later, and the game is here. The original teaser line the developer emailed us of “RC Pro-Am meets Canabalt [$2.99]" couldn’t be a more apt comparison, as Cubed Rally Racer does a great job of combining both the retro feel of isometric NES-era racing games with complete randomization to never play the same track twice.

The goal of Cubed Rally Racer is simple, make it to the end of the track without running out of fuel. You control your car with a set of buttons to turn right or left along with a gas pedal button to accelerate. The controls do take a few races to get used to, as they work exactly like the retro racing games Cubed Rally Racer is based on, and it seems like you have much more control over your car if you tap a direction instead of holding it. 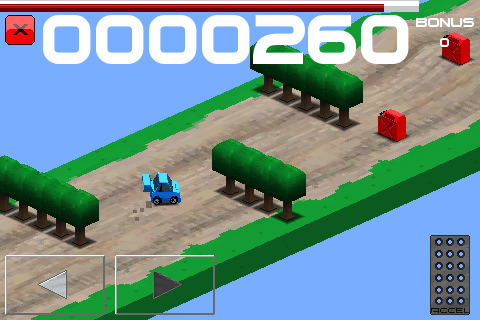 Your car can be refueled by picking up gas cans scattered around the track, as well as golden gas cans with provide a turbo boost for a short period of time. Depending on how cruel the random track generator is, there can be obstacles and jumps all over the place, and there is nothing quite like having the finish line in sight, only to crash in to a cow and need to start over. (Yes, you really can crash in to cows.)

At the end of the race you have three options: You can generate a brand new track to race on, re-play the same track and race against your ghost for more points and a better time, or send an OpenFeint challenge to a friend which includes your track and ghost for them to race against. Something I’d love to see in the future is the ability to save a track, as I’ve come across some that are beyond ridiculous filled with jumps, gophers, and, draw bridges complete with a ship sailing back and forth that were simply impossible, or far above my ability, to beat. Another thing that has been suggested in our forums is an endless mode, which I also imagine would be absolutely awesome.

While I love in-depth games like Chaos Rings [$12.99], Baseball Superstars 2010 [$4.99 / Free], and the many other games on the App Store that you can sink an immense amount of time in to progressing through the game, the games I always come back to are the ones you can pick up and play for a minute at a time. Doodle Jump [99¢] is highly praised around here because of how perfectly Lima Sky nailed the ability to just load up a game, play for as long as you have time, and do it all over again the next time you’re bored. Cubed Rally Racer really seems to have a similar appeal to it in that the tracks are short enough to play a few while you’re standing in line somewhere, and like Doodle Jump, the randomization factor always keeps things feeling fresh.

The controls may be a tad too finicky for players who weren’t around for racing games before the advent of analog controls, but if you loved RC Pro-Am, Rock n’ Roll Racing, and the many other similar games of the era, Cubed Rally Racer will become your de facto “I have two minutes what should I play?" game. Personally, I expect Cubed Rally Racer to live a long life on my iPhone comfortably nestled between the Doodle Jump and Canabalt icons.