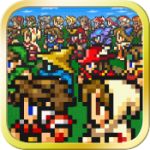 When we first heard that Square Enix would be releasing a new retro-based Final Fantasy, I was excited to see if we’d end up with another adventure similar to Final Fantasy: Dimensions (Free). Unfortunately, Final Fantasy: All the Bravest (Free) is as far away from such a title as you  can possibly imagine. Focusing entirely on simplified battles, Final Fantasy: ATB is less of a game and more of a blatant attempt to extort cash from a weary fan base for a brief glimpse of nostalgia.

You’ll find no story (other than a generic intro narrative screen), character development or meaningful interaction in All The Bravest. Instead, players bounce from stage to stage set in one-screen locations vaguely reminiscent of overworld locations across various Final Fantasy games. Each stage typically consists of several rounds of enemies also extracted from a wide range of previous games in the series. Players battle those enemies, earn experience, gain party level-ups and also earn gil, although there are no gil-based shops to speak of. While this description alone feels suspect for a Final Fantasy, this is only the tip of the iceberg for ATB’s troubles. 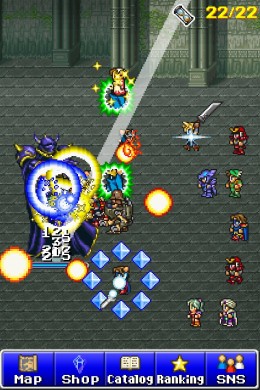 Gameplay in FF:ATB consists of tapping (or sliding) your finger across party members, which activates their attack on a random enemy. There are no move choices, enemy selections, or party order; each member has its own attack bar and you’re free to tap on them for another attack when it’s filled. Win the battle and you’re rewarded with experience which goes towards your party level and occasionally bestows an extra party slot for your team. Eventually your party becomes huge, with tons of characters constantly attacking and lots of battle bars to keep track of. Battles also occasionally award weapons which increase character attack powers but really don’t add much in the grand scheme of things.

While the concept of large, hectic, simplified battles seem intriguing, the large parties coupled with randomized attacks lead to a game that has very little strategy in it whatsoever. Seriously, the most important thing you’ll plan is how fast you’re going to slide your finger across the screen. Even worse, the fact that all attacks are random lead to some frustrating scenarios where you have a baddie on the edge of defeat but your party keeps attacking all the other enemies (letting that one stay alive and attack). It’s a far cry from the actual Active-Time Battle system that the game subtly references.

As if the above bastardization of Final Fantasy‘s classic battle system wasn’t enough, ATB goes even further with a ridiculous IAP system complete with a freemium-esque scheme of encouraging players to wait or pay. In addition to the 20 default character classes that are unlocked during play, players have the option of purchasing 35 additional ‘Premium’ characters at a buck a piece. These premium characters are actual cast members picked from all FF games (such as Lightning from FF13 or Yuna from FF10) and come with their own unique (and typically powerful) moves.

Unfortunately, you don’t have a choice as to which premium character you buy, as the game will randomly unlock a character for you with your purchase. This last point feels absolutely ridiculous and completely outweighs any potential intrigue some might have with seeing what some of the recent FF characters look like in pixel-form (besides, how would you know if you’d even get one?). Meanwhile, completionists will balk at the fact that character lists will remain unfinished until every character is bought and used. There are also additional worlds to purchase, they offer nothing more than ‘what-if’ 16-bit views of later games.

Some may wonder what happens if you lose all your party members in an intense battle. Well, you restart the entire round, wait for your party to regenerate at a rate of one member every three minutes, or use an hourglass that instantly revives your party but is only available for purchase via IAP. Truth be told, there’s no reason for the hourglass mechanic to exist other than a blatant attempt to sell hourglass IAPs. 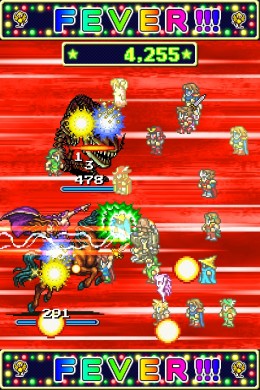 In addition, as you progress and get larger parties, the natural rate of party regeneration goes from annoying to intolerable as the worth of each party member plummets (since your total party increases in proportionate to enemy strength). The worst part is the fact that you WILL encounter boss battles that no amount of reasonable grinding will solve, forcing you into long waits for party regeneration and fever, or simply shelling out for hourglasses.

I have no problems with games that are little more than fan service. If a developer releases a game that simply gives its loyal fans “more of what it wants," it’s typically a win-win situation for most parties involved. Final Fantasy: All The Bravest, while featuring a lot of bits and pieces of nostalgia, is not fan service.

Such games typically give something back to its community in some form or fashion. FF:ATB instead wants to extort from its fan base, which is easily apparent in its lackluster presentation, non-existent “gameplay," and ridiculous IAP scheme. ATB was disappointing enough in the fact that it’s not a real RPG, but it’s downright appalling when you think about the fact that it’s simply a cash-grab. For everyone but the most stalwart FF fans (and I implore even them): this trip down memory lane isn’t worth it.