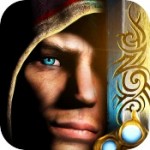 In case you haven’t noticed, we’ve really been awaiting the release of Crescent Moon Games‘ follow-up to their 2009 open-world RPG Ravensword ($2.99) (and so have you, if our anticipated games list is any indication). After years of waiting, including the launch of a new label as well as another excellent RPG, Ravensword: Shadowlands ($6.99) is finally here. Just as the original Ravensword made its mark for bringing a sought-after genre to iOS, Shadowlands demonstrates just how far the genre has come on the platform, making it one of the most ambitious and enjoyable RPGs of the year.

After a magical gambit in the war against the dark elves goes awry, you wake up at a local guild in the city of Aven, wondering how you got there and why you managed to survive. After a few initial quests, you end up at the door of the Archmage, keeper of magical lore and mastermind of the magical spell that nearly killed you. Upon learning of a deeper threat, the Archmage sends you on a quest to recover three Ravenstones, powerful artifacts that will allow you to enter into the Shadowlands and destroy a demon bent on destroying the entire world. In terms of narrative, Ravensword: Shadowlands weaves a tale appropriate for the grandiose scale of the game. While it probably won’t be winning any awards for originality, I was satisfied with the game’s lore which was apparent in the quests, characters, and books. 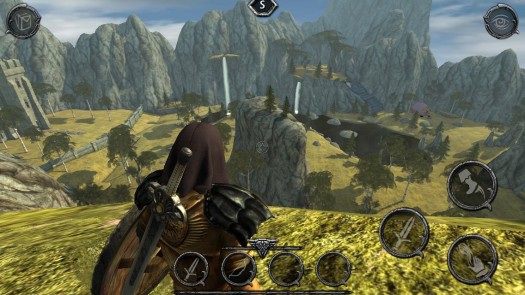 Meanwhile, the game’s open-world gameplay is everything we’ve come to expect from Crescent Moon Games, and then some. From the moment you customize your player at the onset (which, by the way, offers a pretty decent editor) you’re free to play the game however you wish. Shadowlands employs an ability system similar to Elder Scrolls: Oblivion in the sense that you gain skills by performing actions. Meanwhile, killing baddies also earns general experience that work towards leveling up, with each level-up giving you points to spend on your attributes and talents.

While the talent system lends itself to some specialization (seeing as how talent points eventually get rare), I’m a big fan of the fact that Shadowlands allows you to improve on any aspect of the game that you want to work on. Whether you want to be a melee fighter, magic user, or stealth ranged damage dealer (or all of the above!), Shadowlands provides viable paths for each style, which is more than I can say for other titles. In addition, I had no issue with the game’s controls, which offered simple movement and battle controls with a few necessary extras such as auto-run and a quick-bar.

Complementing the character specialization is a wide array of weapons, armor, stat-enhancing jewelry, and spells available for use. Weapon types all play slightly differently, while the armor is geared towards a balance between raw defense and weight. Ravensword: Shadowlands even offers players the ability to purchase and furnish houses, although the system for doing so is a bit rough around the edges. 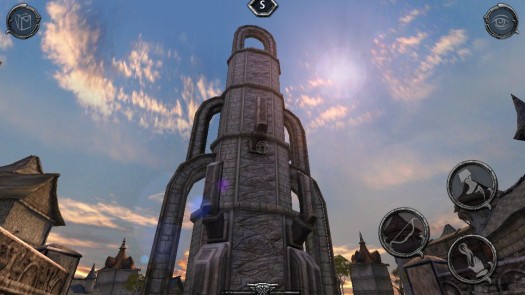 While it’s certainly possible to power through the main quests and complete the story relatively quickly, I wouldn’t recommend it. Explore your surroundings and you’ll find hidden caches of chests, random caves filled with enemies and treasures, and locales looking to hire a hero for a quest. A lot of open-world games suffer from having a grandiose world but nothing to do in it. Shadowlands doesn’t suffer from that issue, instead featuring a world that not only encourages exploration, but rewards players for doing so.

Another reason you’re going to want to explore the world of Shadowlands is the simple fact that everything looks amazing. Crescent Moon continues the trend started with Aralon of open-world games that not only play great, but also look beautiful. This is one of the few iOS games I’ve played where I’ve actually stopped and just marveled at the world surrounding me. Playing this game on an iPhone 5, I was also amazed not just with the level of detail and viewing distance, but also with the fact that the game ran at a smooth framerate with little slowdown.

While there’s a lot to love in Shadowlands, one perpetual complaint lies with the game’s tendency towards bugs and graphical glitches. Occasionally you’ll take out an enemy that doesn’t seem to adhere to physics and fall to the ground. I’ve also had a few occasions where certain graphics in an environment are replaced with other assets, leading to strange situations like a giant glowing piece of armor floating in the sky.

In addition, I encountered a few instances where I’d receive a side mission and have it marked as completed before I even knew what I was doing. Conversely, you might complete a quest but the game will still think you’re working on it (even after turning it in). I also had a situation where I stumbled into a cave where all the enemies were immune to arrows (no idea why). While all these issues are certainly annoying, they’d hardly be considered game-breaking, and will likely be ironed out in future updates.

It sounds cliched, but it’s hard to believe I’m playing a game of this caliber on iOS. All too often we see games that sacrifice gameplay depth for visuals or vice versa. Other than a few minor glitches, Ravensword: Shadowlands is the real deal, and is an excellent open-world RPG with a decent story, ample content, deep character customization and beautiful visuals. Not only is Crescent Moon Games’ latest offering a perfect example of how far we’ve come in terms of iOS gaming, I’m also excited to see what can be done in the future.