One of the very best gaming moments in my life took place 28 years ago, yet I remember it as vividly as if it happened yesterday.

One evening in 1984, my mother and I drove out to meet my father after work for dinner, after a quick stop at the mall to visit the local Games ‘n’ Gadgets. On this night, I wasn’t just browsing again. No, I had been granted the rare opportunity to actually take a title off the shelf and buy it. On arrival, I wasted no time dilly dallying; I walked right over to the Apple II section, grabbed the game of my desire, and took it to the cash register where dear old mom kindly pulled out the plastic and paid the $39.95. A short while later, over at the restaurant, I excused my 12-year-old self from the table and walked to the pay phone on the wall by the bathrooms. I put in my quarter, dialed my best friend, and when he answered, I looked down at the box in my hands and proudly proclaimed, “I got it! I have it right here! I got Karateka!"

Ahh, Karateka. It wasn’t a game so much as a living story that you, the player, were a part of. Within the severe constraints of the technology of the early ’80s, designer Jordan Mechner pulled the player into the tragic tale of Princess Mariko, captured by the evil warlord Akuma and held in his fortress high atop a craggy cliff. It was up to you, and you alone, to fight your way through Akuma’s warrior defenses in order to save the princess. Your only weapon was your skill at Karate, and there were no second chances — as in the real world, death came but once, and finally. The game was beautifully executed and wrung true emotion from the player who was often at the edge of his or her seat. For these reasons, Karateka is widely considered to be one of the greatest 8-bit home computer games ever created.

Flash forward 30 years to a time where the machines we all use daily are thousands of times more powerful than the Apple II on which Karateka was originally written. Mechner, who created Karateka out of an interest in film and animation and a desire to convey a story, began to consider how his 30-year-old idea might be realized on today’s flat panel displays. To bring this about, he teamed up with Liquid Entertainment early this year and the team set to work re-envisioning the 8-bit classic. The fruits of their labor went live first on the Xbox 360 early last month, and the iOS version ($1.99) has just landed in the App Store. 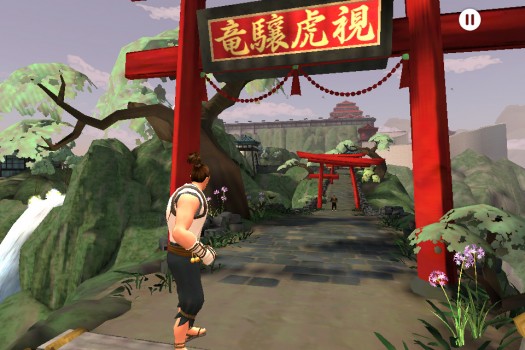 The original Karateka was designed as a 2D side-scrolling game with simple sprite graphics. You travelled on a linear course from the starting ledge, left to right across the screen along a straight pathway, through the occasional dojo, and on to the fortress of Akuma. In the re-envisioned Karateka, you follow a similar, linear course to the fortress, but the world is realized very much in three dimensions. 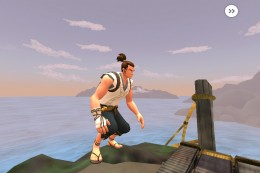 At the start of the game, as on the Apple II original, the hero is found emerging from a long climb up the cliff face, stepping out onto the pathway to Akuma. Rather than a side-on glimpse of the scene, you look over the shoulder of your character in this 3D world to see your first adversary some distance down the path that stretches through an ornate arch and off into the distant landscape. The new world of Karateka is lush and detailed, filled with streams, bridges, bamboo forests, falling leaves, and ornate Japanese architecture.

As you approach your enemy, the camera follows, swinging to a new angle when you come within fighting distance. While the original game had a cinematic feel, thanks to its well-placed cut-scenes, the new Karateka adds notably to this by employing many different camera angles that punctuate and lend focus to the action at hand. As you make your way along the meandering path, the varying cameras provide well-framed views of the Japanese forest leading to the fortress. The fight sequences, themselves, feature dramatic changes of perspective that pace the action well. 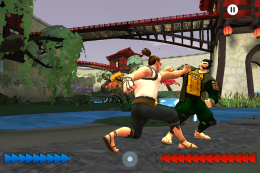 And, what of the fighting? A big part of what made the original Karateka so great was the fighting system. You had one life, and that meant there was no room for mistakes. At each encounter it was a game of advance and retreat, of timing and caution, always with an eye on your health bar…and that of your enemy. Thanks to the pacing of the combat, and what was at stake (just one life!), when you saw victory, you felt it in your gut. And, more so for defeat.

Today’s Karateka takes a different and rather unique approach to combat. Sparring with the string of ever mightier enemies you encounter on your journey to the fortress is carried out by way of a rhythm based mechanic with an alternating system of attack and defense. When combat begins, you are on the defensive and your enemy delivers a series of blows that require perfect timing to defend. If you successfully block his attacks, it becomes your turn to deal out the damage — but if you falter, your enemy immediately delivers another round of attacks. It’s a back-and-forth that continues until someone’s health bar fully depletes and only one of you is left standing. During the fight and based on your performance, your Chi level slowly increases and, when full, can be used to deliver a stunning, special attack. What’s more, the symphonic score that accompanies the combat sequences acts as a hint system for the number of attacks your enemy is about to deliver, if you pay close attention. Another thing to pay close attention to are the sparkling blue flowers with which Mariko peppered the pathway to the fortress — pick them up to see your health restored. In all, it’s a rather different combat system than that of the original game, but it succeeds wonderfully in delivering that same level of “gut" satisfaction, which was a critical requirement for this release.

Another departure from the original Karateka is the life system. While the original offered a single life for your character, the new Karateka features three lives — and each one is a different hero. 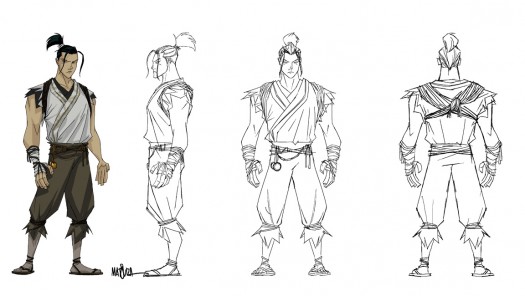 You start off the game as Mariko’s True Love, the handsome hero that she longs to have rescue her. He is the underdog that will give it all up to hold Mariko in his arms once again, but he is meek compared to many of Akuma’s warriors, and the challenge is great. If the True Love makes the ultimate sacrifice before defeating the evil warlord, The Monk steps in. Abandoning his vows to rescue poor Mariko, The Monk is physically mightier than the True Love, and can both deliver and sustain more damage. In the end, however, the challenge may be too great for him, as well. In, then, steps The Brute. This hulking behemoth brings more muscle than brains to the fight, but is able to dole out incredible damage and is nearly indestructible.

Each hero features his own style of musical accompaniment, enriching the feel of each character. The score is skillfully orchestrated by two-time Grammy winning composer Christopher Tin.

Players have the best chance of rescuing Mariko with The Brute, but it’s not he that she hoped would sweep her back to safety and, as such, their victory scene is rather bleak. Three different heroes and three different endings to the story. It’s a brilliant life system that delivers variety in the gameplay as well as incredible replay value; you won’t want to stop playing until you rescue Mariko as her True Love and see the storybook ending.

Oh, and the hawk! Akuma’s cursed hawk! Indeed, the avian menace from the original makes its troublesome existence known from time to time as your traverse the path to the fortress. It’s a talon to the face, unless your defense and attack timing is spot-on.

The original title was made to be a story that could be experienced in one sitting. It typically took days or weeks of replays to make it through, but a successful run could be done in around half an hour. This is also the case with the new Karateka. Some readers, myself included, were originally somewhat concerned in looking at early screenshots of the game because, while lovely, to the unacquainted they look like a 3D brawler, which is not what Karateka was all about. It’s an experience more about playing through the story — start to finish — than fighting in perpetuity. Those who loved the original will be happy to hear that the fighting / story balance of the original has been preserved. 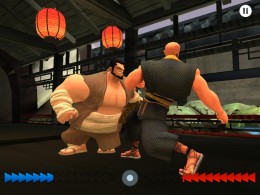 As mentioned earlier, the new Karateka has recently been released for consoles and the PC, and some readers may have spent time with those recent, well-received versions. There are some differences between the iOS versions and the rest worth mentioning. In our interview with Jordan Mechner (which we will be posting shortly), he indicated that the decision was made to make the iOS version somewhat simpler than the console versions, to facilitate on-the-go, pick-up-and-play gaming for a mobile platform. The main difference is in the attack system. While the console versions of the games give the player both distinct kick and a punch abilities (a button for each), the iOS version uses a single tap for attacks that automatically vary the method of contact. Additionally, in the iOS version there is a visual hint at the top of the screen preceding enemy attack, revealing the number of coming blows. I find that the changes do, indeed, make the game slightly easier than the Xbox 360 version, but not dramatically so. 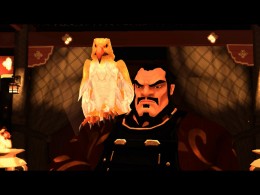 Karateka for iOS features Game Center integration that nicely fuels the drive to achieve a True Love victory. The game supports the Retina display on the iPhone, but unfortunately not on the iPad, and the full width of the iPhone 5 display is not, presently, utilized. Asking after this, I was told that these features did not make it into the game with the developers’ heavy multi-platform, end-of-year launch shuffle, but that they may arrive at a later date. Visually, the iOS version, which weighs in at a hefty 1GB in size, compares quite favorably to the Xbox version. The system requirements are fairly hefty, as well; Karateka supports the iPhone 4S or better and the iPad 2 or better. Framerates were smooth on the iPhone 5, fourth generation iPad, and iPad mini test devices used for this review.

Karateka. 30 years later. Does the magic stand the test of time? As I have so subtly implied, I am a bit of a fan of Mechner’s original masterpiece, and was skeptical upon seeing the the first sketches and screenshots of this re-invisioning. For fellow fans of the original, I am happy to say that my concerns were allayed just minutes into playing the Xbox 360 version on launch day — and the iOS version should treat players the same. I found that, while this modern console title appears quite different than the Apple II original — in a lavish sort of way — it, at the same time, feels very much the same. The new Karateka legitimately feels like it might be what Mechner’s original idea would have been, if then were now. And that’s a win. For those who remember the original, the new Karateka must not be missed. And, to those with no prior knowledge: you have a excellent, new experience in store.

Those interested in hearing more about the process by which Mechner and his team bridged three decades in creating the re-envisioned title should have a look at his four-part video series that details the development process.