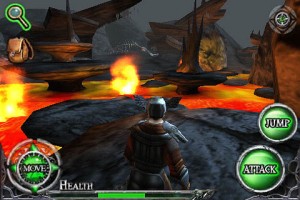 The day is finally upon us– Ravensword: The Fallen King [App Store] is here. To say this collaboration between Russ Menapace of Human Powered Games and Josh Presseisen of Crescent Moon Games has been highly anticipated among our community would be a bit of an understatement. The thread in our upcoming games forum collected thousands of posts, we had the eccentric developers on our podcast and nearly 100 comments from upset fans when Ravensword and many other Unity-powered games were rejected last week.

Ravensword is an open-world roleplaying game that begins with a mysterious cut scene that mentions strange creatures wandering the countryside at night, villagers gone missing, and a king who hasn’t been seen in years. Your character was found at the edge of the forest, and was brought to the nearby town of Aven where a friendly woman named Beatrice attempts to answer some of your amnesia-induced questions.

She mentions a nearby castle filled with evil, but obviously recommends you you stay away, and instead head down to the nearby Rat Donald’s stand to take your first quest: Collecting five rats for the “dinner rush". He arms you with a club and then sends you off to the nearby forest to bash the surprising amount of giant sized rats. The rest of the game continues as you hop from quest to quest, leveling up, collecting items, and discovering more about your mysterious identity. 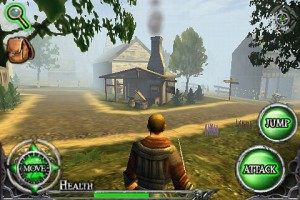 Ravensword has both third person and first person views, and the game’s controls work a lot like the many first person shooters on the platform. A virtual joystick on the left side of the screen controls your movement, and swiping anywhere on screen with your right thumb allows you to look around. Swiping with two fingers changes your view much faster, and is useful for when things sneak up on you from behind.

Combat uses a lock-on system where you can tap an enemy, then start swinging by hitting the attack button in the bottom right corner of the screen. Double tapping an enemy brings up their statistics, and to see your own stats along with viewing the map, changing settings, or looking up your quest log is just a matter of tapping the backpack icon in the top right.

The graphics and music in Ravensword combine very well to create a whimsical fantasy atmosphere that permeates the whole game. Forum members have also reported that Ravensword even performs well on the first generation iPod Touch, but you can squeeze even more performance out of the game by toggling off shadows and foliage in the game’s settings if you prefer a higher frame rate to visual effects. Ravensword runs like a dream on the iPhone 3GS and 3rd generation iPod Touch, a surprising feat given the level of detail in game and the fact that they’re using Unity and not some highly optimized custom game engine. 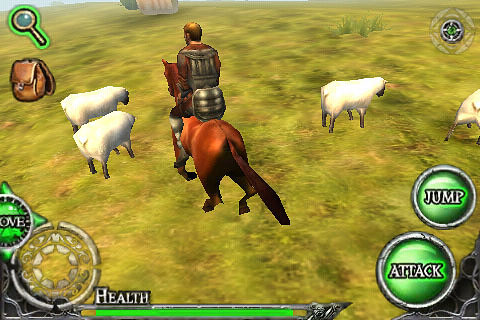 The developers haven’t been modest in their comparisons between Ravensword and other games, and have mentioned long-standing series like Elder Scrolls and Zelda as inspiration behind the game. While the game does have its limitations, it’s an amazingly impressive effort for a two man development team.

Some of its shortcomings are things like lack of any real character customization, when you level up your attributes are assigned automatically and there aren’t any skill trees to speak of– two features that have become somewhat expected in most modern RPG’s. There’s also no secondary skills or traditional magic you can cast, so in its current form you will be limited to swinging your melee weapon and (when you get it) shooting your bow.

Later in the game, things do start to feel a bit limited, but more because of the lacking diversity in weapons and armor than the inability to customize your character’s skills. In games like Dungeon Hunter or Underworlds, different loot flows like water, and it seems like you’re constantly upgrading gear– something I feel like I’m missing from Ravensword. Despite that, the game world itself and the plot line of the main quest kept me sucked in throughout and the impressive 3D engine gives the game an open-world feeling otherwise unmatched on the iPhone.

Overall, Ravensword is a great addition to the somewhat scarce landscape of RPG’s on the iPhone. It has some flaws, but it’s a lot of fun and at the end of the day that’s really all that matters. With an estimated 6-8 hours of gameplay, and side quests to keep you busy long after that, I can’t help but recommend Ravensword.